Kareena Kapoor-starrer Heroine is working wonders in the overseas market. The Madhur Bhandarkar movie, based on the ups and downs in the life of an actress, was reportedly made at a budget of Rs 20 crore.
READ FULL STORY
IANS | By HT Correspondent, New Delhi

Kareena Kapoor-starrer Heroine is working wonders in the overseas market.

The Madhur Bhandarkar movie, based on the ups and downs in the life of an actress, was reportedly made at a budget of Rs 20 crore.

It released in 42 screens in the Middle East Thursday, and has earned $350,000, with 19 screens still to report the numbers.

In India, Britain and the US, the movie opened Friday.

Heroine has seen a phenomenal opening in all major international markets. This was a highly anticipated movie and our marketing push has helped pull in massive crowds to theatres. No other female lead has seen such a response in recent years," Amrita Pandey, executive director, Syndication, International Distribution - Studios, Disney UTV, said in a statement.

Heroine also features Arjun Rampal and Randeep Hooda in key roles. The movie had a strong buzz around it, and it was heavily promoted across all quarters.

Ever since Madhur Bhandarkar announced his Kareena-starrer Heroine, there was buzz that he has taken digs at various film personalities through the film. He may have outrightly denied it, but there are big digs, and how!

All geared up for Heroine, which uncovers the truth behind an actress' life, director Madhur Bhandarkar is confident the movie is in a safe zone in terms of earning profits.

Kareena thought I'd be a serious director: Madhur Bhandarkar
Madhur Bhandarkar is hours away from realising his dream. Carrying Heroine in his heart for years, he has now managed to bring the story to the big screen. The enthusiasm is pretty much intact, the energy that he brings in every conversation is unmistakable and he is as animated about Heroine as he was for a Dil Toh Baccha Hai Ji, Fashion or a Corporate. READ MORE

Does Madhur Bhandarkar’s Heroine draw upon rumours?
If you’re wondering which Bollywood actors filmmaker Madhur Bhandarkar has referenced in Heroine, you will probably end up with a long list of high profile female stars. An insider reveals that Madhur has incorporated rumours that once buzzed around the lives of past and present screen divas. DETAILS INSIDE

If you are in serious problem, the only people you run to is God and the astrologer to know the future. Can you imagine whom did the gorgeous Kareena Kapoor 'run' into of late to know the future of her career's most awaited film Heroine?

Heroine is drably monotonous, its insights are shallow, most of the characters are caricatures and the lines that they speak border on the corny. Kareena Kapoor is a complete stunner in the movie. She steals the show by delivering a stupendous performance, feel critics.

A Madhur Bhandarkar film has the same allure as a juicy tabloid or some particularly nasty gossip. Bhandarkar is a proudly pedestrian director. His movies are voyeuristic, sensational, sleazy. But invariably, the narrative includes a strong conservative streak so viewers can leer and still feel morally superior. Heroine is Bhandarkar’s great Bollywood exposé. ANUPAMA CHOPRA'S TAKE

SIMPLY BEBO! Kareena Kapoor on the cover of Notch

Today's 'it' girl, Kareena Kapoor, is one of the few people who have lived up to the reputation of the term 'Rising like a Phoenix'. Even though her debut film Refugee was a box-office disaster, she has worked her way to the top to become the 'Numero Uno' star in Bollywood. PIC INSIDE 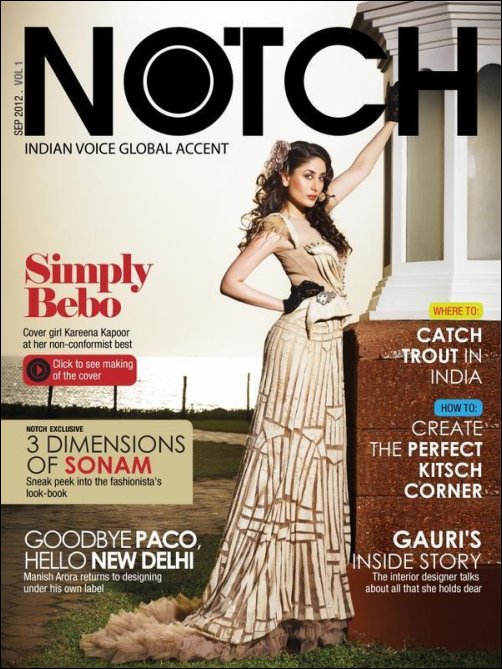 Kareena Kapoor seems to be having serious afterthoughts about a series of blunt comments she passed on rival Priyanka Chopra and her film Fashion. When asked if her upcoming film Heroine was similar to Fashion, which shares the same director — Madhur Bhadarkar, she had told us... READ MOREPriyanka Chopra shoots sharp at Kareena Kapoor

Actor Priyanka Chopra has reacted to her onscreen rival Kareena Kapoor’s comments to an HT City interview where the latter had said that her forthcoming film, Heroine, is bigger than PC-starrer Fashion, despite the fact that Chopra won a National Award for her film. JIBE INSIDE

After Sharmila Tagore, Manish Malhotra has spilled the beans regarding Saif Ali Khan and Kareena Kapoor's wedding. The fashion designer, who has confirmed that he is designing the actress' attire, says he will stick to the bride's simple, yet elegant taste. DETAILS INSIDE

How Kareena Kapoor made it big
Flop films don’t bog down actor Kareena Kapoor. Over twenty box-office duds with almost half the number of hits and a few average films define her 12 years of existence in Bollywood, yet she proudly achieved the title of the 100cr heroine by delivering three blockbuster hits 3 Idiots, Golmaal 3 and Bodyguard, which made over Rs. 100 crore at the box office. FEATURE INSIDE

As the saying goes, there’s no smoke without fire. But in actor Kareena Kapoor’s case, all we can see is a big cloud of smoke. Over the past week, the actor has been constantly making headlines thanks to her controversial smoking scenes in Madhur Bhandarkar’s Heroine. READ MOREBollywood is regressive, says Kareena Kapoor

Kareena Kapoor, 31, may have learnt to deal with her wedding as national news, but what annoys Bebo the most is her marital status affecting her Bollywood career. "I could have been very well married for four years and still doing great in my career. KAREENA SPEAKSKareena Kapoor happy for Salman Khan's success

Kareena Kapoor is happy that Salman Khan's Ek Tha Tiger has done good business at the box office and says she and her beau, Saif Ali Khan, are not at all comparing it with their film Agent Vinod. DETAILS INSIDE