The banks proposed raising an initial corpus of ₹70,000 crore over the next three years for the fund, which will be structured on the lines of the Credit Guarantee Fund Trust for Micro and Small Enterprises (CGTMSE).
READ FULL STORY
By Gopika Gopakumar

A clutch of state-run banks with significant exposure to the farm sector has initiated discussions with the government to set up a credit guarantee fund to cover defaults by farmers, making lending to the sector less risky, two people directly aware of the development said.

The banks proposed raising an initial corpus of ₹70,000 crore over the next three years for the fund, which will be structured on the lines of the Credit Guarantee Fund Trust for Micro and Small Enterprises (CGTMSE). The credit guarantee fund for small businesses makes good losses incurred by lenders up to 85% of the outstanding amount in the event of a default.

“The proposed fund, if approved by the government, will cover the entire Kisan Credit Card (KCC) scheme loan exposure of banks and will solve a big worry for lenders,” one of the two people cited above said on condition of anonymity. “The KCC scheme is mainly availed of by small and marginal farmers with very limited financial resources, and assuming that 10% of the total outstanding amount becomes stressed, it is estimated that a corpus of ₹60,000-70,000 crore will be required to cover loan losses.” 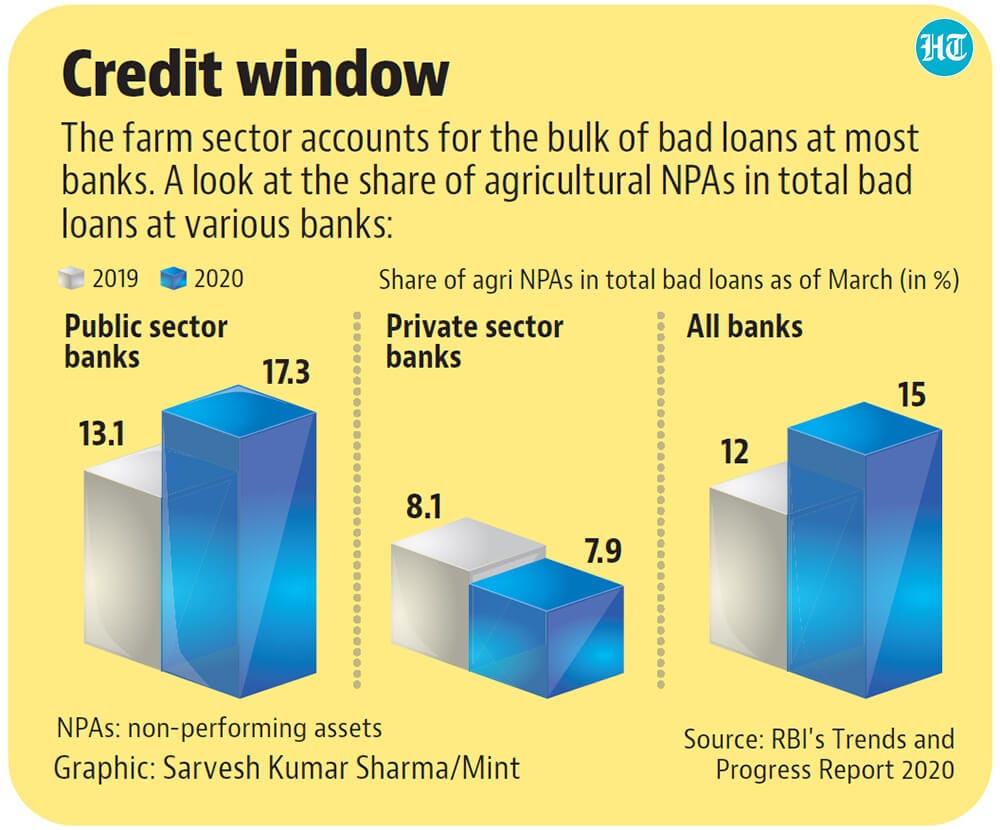 At the end of March last year, KCC loans stood at ₹7.09 lakh crore, which account for about 40% of the total agricultural loans made by banks. The Centre gives an interest subvention of 2% and prompt repayment initiative (PRI) of 3% on short-term crop loans up to ₹3 lakh. To mitigate the impact of the pandemic, RBI asked lenders to extend the subvention and PRI incentives to short-term crop loans of as much as ₹3 lakh, where instalments are due between March 1 and May 31 2020.

With the setting up of the fund, banks will be encouraged to lend to the sector. In 2019-20, ground-level credit flow to the agriculture sector reached ₹13.68 lakh crore, 8.8% above the previous year, according to data from National Bank for Agriculture and Rural Development (Nabard). Banks are also hoping that it would obviate the need for farm loan waivers by states as they can participate in the fund, the banker said. RBI governor Shaktikanta Das, in his speech at the Mint banking conclave last year, said that a generalised loan waiver is credit-negative, which undermines credit culture in the system. He had also added that the relief related to agriculture loans should be a targeted one.

The farm sector accounts for the bulk of bad loans for most banks. Gross bad loans in agriculture loans constituted 15.85% of the total credit disbursal of State Bank of India at the end of March 2020, compared with 11.56% in March 2019. For fiscal year 2020-21, agriculture NPAs stood lower at 13.7% on account of the moratorium on loan repayments.