Polling for the first phase of Chhattisgarh assembly elections took place on Monday with Election Commission stating that around 70% voter turnout was recorded. Eighteen seats spread across eight Maoist-affected districts went to polls in the state. The ruling Bharatiya Janata Party (BJP) is eyeing a fourth straight term in the tribal-dominated state as the opposition Congress seeks to return to power after 15 years.At least six Maoists were reported to be killed in two encounters with security personnel in Bijapur and Sukma districts.Here are the highlights:

Polling was peaceful. In comparison to earlier elections, this elections have been singular achievement of the people working in fields. Attempts were made to create fear among people but enthusiasm in voters was appreciable: OP Rawat, Chief Election Commissioner

Only 1% of EVM and 1.9 % VVPATs were changed, says Sudeep Jain, Election Commission.

Two Maoists were killed after an encounter with District Reserve Guard (DRG) in Sukma district of Bastar region.

Voting has ended, turnout is 70% till now in the first phase of Chhattisgarh polls. Figures will be updated later: Umesh Sinha, Election Commission.

A day after resigning as the vice president of Congress’ Chhattisgarh unit, Ghanaram Sahu joined the Bharatiya Janata Party in the presence of the party chief Amit Shah. 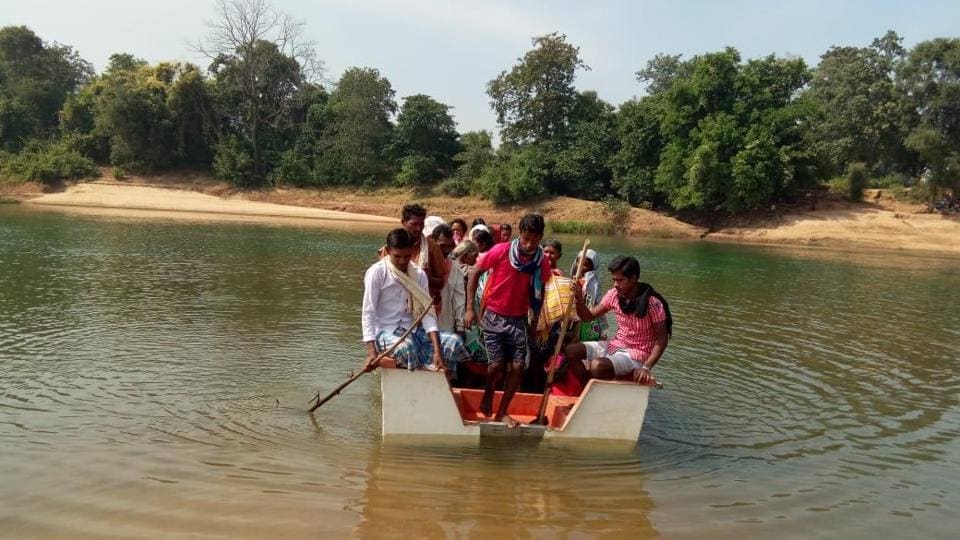 Maoist couple Mainuram and Rajbatti, who surrendered in December 2014, voted in Narayanpur district.

47.18% voter turnout recorded till 3 pm in the first phase of Chhattisgarh assembly elections.

EC sources said 37.6% votes have been cast till 2pm in 18 constituencies.

After the Nilwaya Maoist attack, the challenges have gone up. Maoists had threatened villagers against voting. We assured the villagers of a secure environment, put in place a three-level security so that people can vote without fear: CRPF official tells ANI.

People in Dantewada’s Madenda village cast their votes even after threat from Maoists that they would cut off fingers if the ink is seen. A local told ANI, “There are 263 registered voters in the village and many are voting even after the threat.”

Turnout in Keshkal and Kondagaon

103-year-old woman Soni Bai exercised her voting rights at a polling booth in Gorgunda’s Devarpalli, reports ANI. Her son carried her to the polling station in his arms.

Sukma: 103-year-old woman Soni Bai exercised her voting rights at a polling booth in Gorgunda's Devarpalli. His son carried her to the polling station in his arms. #ChhattisgarhAssemblyElections2018 pic.twitter.com/dIJk9kXrRN

Certain sources are spreading rumours that EVMs are malfunctioning repeatedly. This is to clarify that above information is false. Voting is going on smoothly. If at all any glitches are noticed, the issue is sorted out as quickly as possible: Election Commission.

Bilaspur must be a smart city. The government will provide all help in that direction. Only BJP can ensure Chhattisgarh is free of Maoists. Those who gave birth to Maoism, will they ever eliminate it? They defend Maoists, call them revolutionaries: PM Modi

Ayushman Bharat has made healthcare affordable for poor: PM Modi

Opposition has a knack of making fun of all our schemes. Earlier there was lack of healthcare; medicines and treatment were expensive. Due to Ayushman Bharat, healthcare has become affordable for poor: PM Modi

Poor people deposited ₹90,000 crore in banks. The number of houses we built for poor in four years, Congress would have taken 30 years. More than 6 lakh houses, including 1.5 lakh under PM Awas Yojana for tribals, have been distributed in Chhattisgarh: PM Modi

Congress’ politics is centred on one family. Which poor doesn’t want gas connection or bank balance? But the family in Congress is disconnected from people. They neither have the will nor the leadership to bring changes: PM Modi

Opposition wants to instil a sense of caste among people. But people have seen through that. Opposition is confused about how to face BJP.

Some people want to create differences between people — between rich and poor, between urban and rural. BJP believes if India has to grow, differences among people should be done away with. Only development can do that, and BJP is committed to that: PM Modi

High turnout message to those who think power can be wielded through gun: PM Modi

Those who think power can be wielded through the gun have been proved wrong. There should be competition among men and women in every village as to who can ensure more turnout. Thank EC for their efforts: PM Modi

Bilaspur is the rice bowl of India. It can steer India’s growth. When poll dates were announced, many pundits thought that due to the festive season, turnout will be low. But they have been proved wrong: PM Narendra Modi in Bilaspur.

Voters in Jagdalpur’s Gandhi Nagar ward protest outside the polling centre alleging that the names of many voters are missing, including those who have been living in the area for the past 25 years, reports ANI.

#ChhattisgarhAssemblyElections2018: Voters in Jagdalpur's Gandhi Nagar ward protest outside the polling centre, say, "The names of many voters are missing including those who have been living here for the past 25 years." pic.twitter.com/AGri8PE626 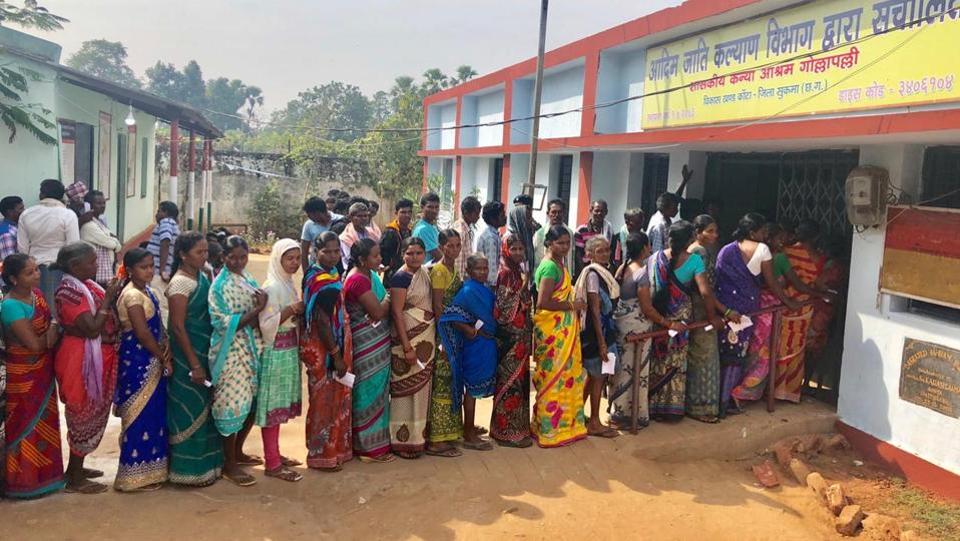 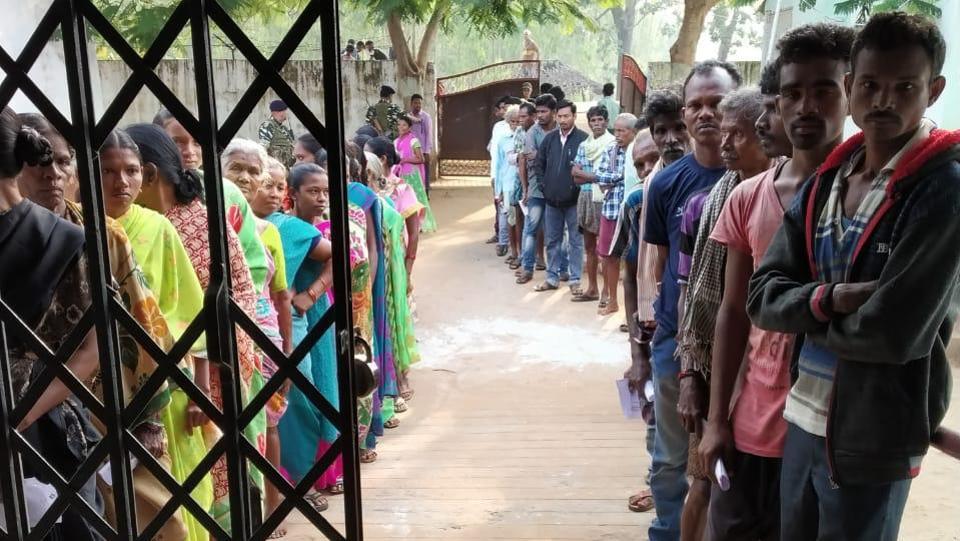 Mortal remains of BSF sub-inspector Mahender Singh who lost his life in an IED blast in Chhattisgarh’s Kanker yesterday, has been brought to his residence in Dumariya village in Rajasthan’s Bharatpur, reports ANI.

Bharatpur: Mortal remains of BSF Sub-Inspector Mahender Singh who lost his life in an IED blast in Chhattisgarh's Kanker yesterday, brought to his residence in Dumariya village. #Rajasthan pic.twitter.com/ec0kbcyxbM

Visuals from Jagdalpur and Geedam

16.24% voter turnout recorded till now in the first phase of #ChhattisgarhAssemblyElections2018 in 18 assembly constituencies; Visuals of polling centers in Jagdalpur and Geedam pic.twitter.com/3kySeF4nfe

Huge turnout in village where Maoist posters were seen

One kg explosive recovered from Pandepara on Bijapur-Bhairamgarh-Keshkutul Road. CRPF’s bomb disposal squad defused them. One suspect has been arrested from the spot.

EVMs in Kanker and Bijapur districts report technical snags. Voters wait in queues and polling is yet to begin.

Brisk polling was reported from Bheji amid tight security. In 2017, 14 CRPF personnel were killed here. 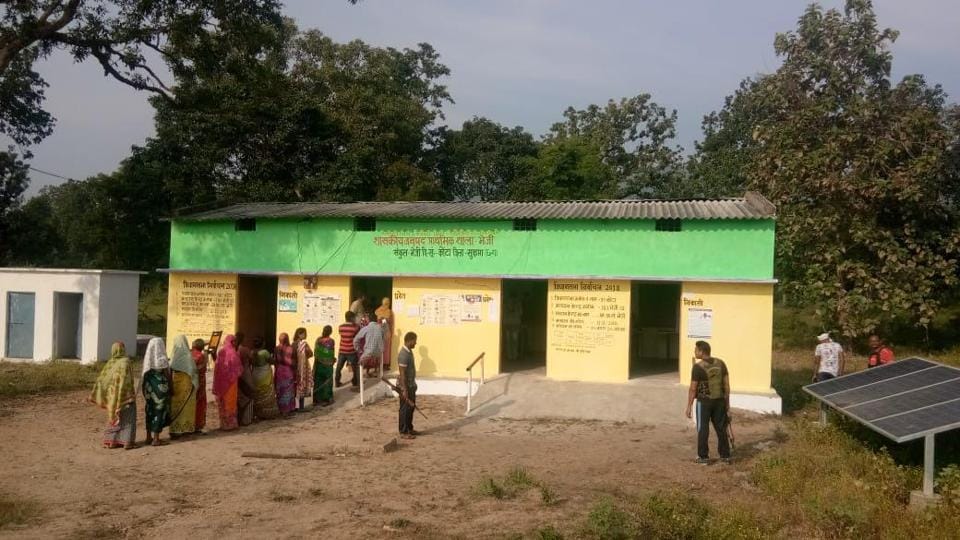 Votes polled till 10 am up compared to last time

The Maoist hotbeds of Bheji and Gorkha recorded more votes polled this time:

14% voter turnout recorded till 10 am in the first phase of polling, EC sources say.

Three IEDs have been detected near a polling booth in Konta’s Banda and a CRPF bomb disposal squad is in the process of defusing them, reports ANI.

Sukma: An IED was detected near a polling booth in Konta's Banda. Pictures of voters queued outside a makeshift polling booth established under a tree, away from the actual polling booth. #ChhattisgarhAssemblyElections2018 pic.twitter.com/kIK498ZRG2

People are seen queueing up outside polling booths as voting is underway, in the interior areas of Kistaram, Palem and Bejji in Maoist-affected Sukma district.

A visually impaired man casts his vote at a polling station in Dantewada’s Geedam.

Prime Minister Narendra Modi leaves for Chhattisgarh from New Delhi, where he will address a public rally in Bilaspur, reports ANI. 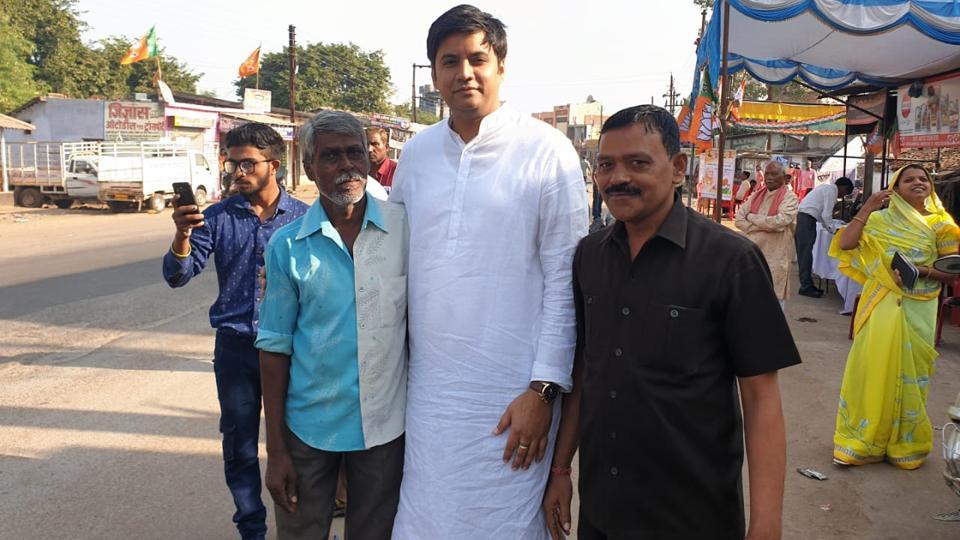 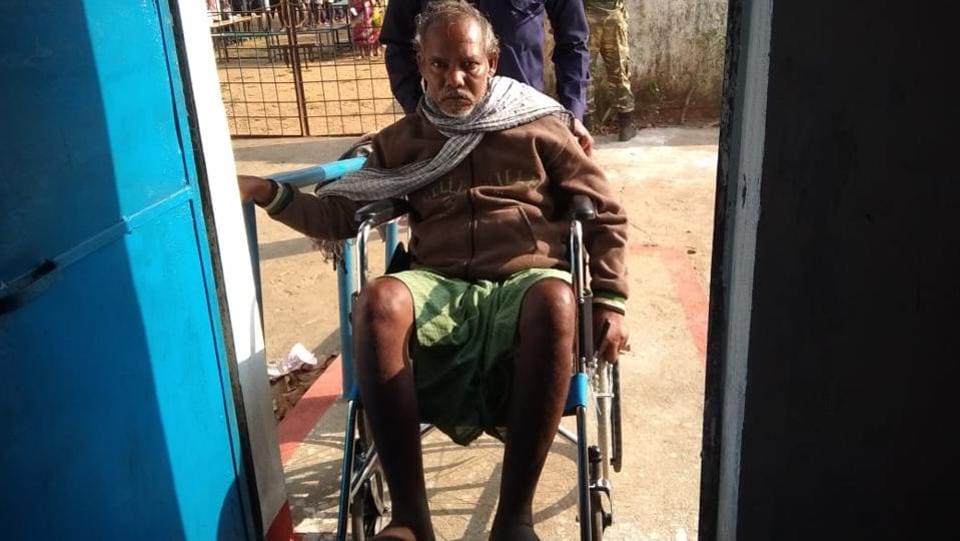 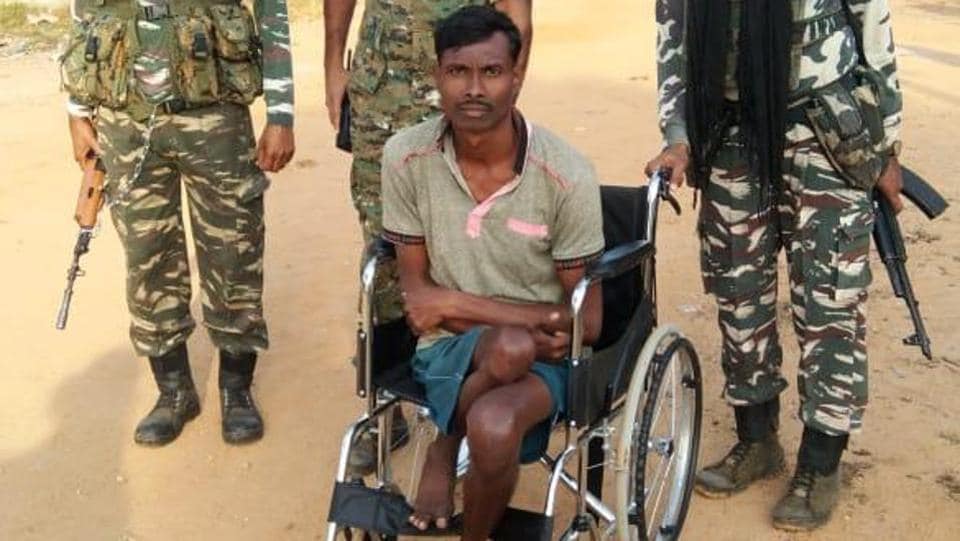 Voting has stopped due to technical problem in EVM at a women-only polling booth in Kamla College, in Rajnandgaon’s Sangwari, reports ANI.

The fate of incumbent CM Raman Singh who has been pitted from Rajnandgaon constituency will be sealed today. The Congress has fielded former PM late Atal Bihari Vajpayee’s niece Karuna Shukla from this seat against Singh.

Voting begins in rest of the seats

Voting begins in rest of the eight seats in the first phase of polling.

Sukma: A 100-year-old woman reaches a polling station in Dornapal to cast her vote in the first phase of #ChhattisgarhAssemblyElections2018 pic.twitter.com/A8W8zxpcxf

In the first phase, 190 candidates are in the fray and as per electoral rolls, there are 31,80,014 voters. As many as 4,336 polling booths have been set up for the first phase and 19,079 polling personnel have been deployed.

Seats that will vote from 8am

Khairagarh, Dongargarh, Rajnandgaon, Dongargaon and Khujji constituencies in Rajnandgaon district and Bastar, Jagdalpur and Chitrakot in Bastar district will see polling from 8 am.

IED blast in Nayanar village of Katekalyan area in Dantewada. Blast occurred when troops of the 195 Battalion of CRPF were approaching a polling booth. No injury to troops reported.

Voting begins in 10 out of the 18 seats going to polls.

#Chhattisgarh: Voting begins for 10 out of 18 seats in the first phase of #ChhattisgarhAssemblyElection2018 pic.twitter.com/n3mXyn4Nhd

Visuals from a polling station in Rajnandgaon's Metepar village ahead of the first phase of voting in #ChhattisgarhAssemblyElections2018 today. pic.twitter.com/biJDndepQT

Visuals from a polling station in Dantewada ahead of the first phase of voting in #ChhattisgarhAssemblyElections2018 today. pic.twitter.com/XD83OaM5cm