Home / Cities / Delhi News / And then they were one: 3 MCDs unified

And then they were one: 3 MCDs unified

The Civic Centre in central Delhi, which housed the headquarters of the South and North MCDs, is the new home for the unified MCD.

Special officer Ashwani Kumar and commissioner Gyanesh Bharti on Sunday took charge with the national capital once again coming under a unified municipal corporation — ten years after the civic body was divided into three separate corporations, breaking what then was one of the biggest civic bodies across the world.

The Civic Centre in central Delhi, which housed the headquarters of the South and North MCDs, is the new home for the unified MCD. Interestingly, it is here that the municipal offices were moved after they were trifurcated from the heritage Town Hall building in Chandni Chowk, which had been the home of the MCD for decades.

Sunday also marked the end of tenure of all the sitting councillors, mayors and various committee members from the three municipal corporations. Senior bureaucrats will run the civic affairs in the city until fresh elections are held and elected MCD holds its first meeting. However, the conduct of polls will wait for the comprehensive delimitation exercise to take place since the Delhi Municipal Corporation (Amendment) Act, 2022 provides that there will be a maximum of 250 words, fewer than the current 272. 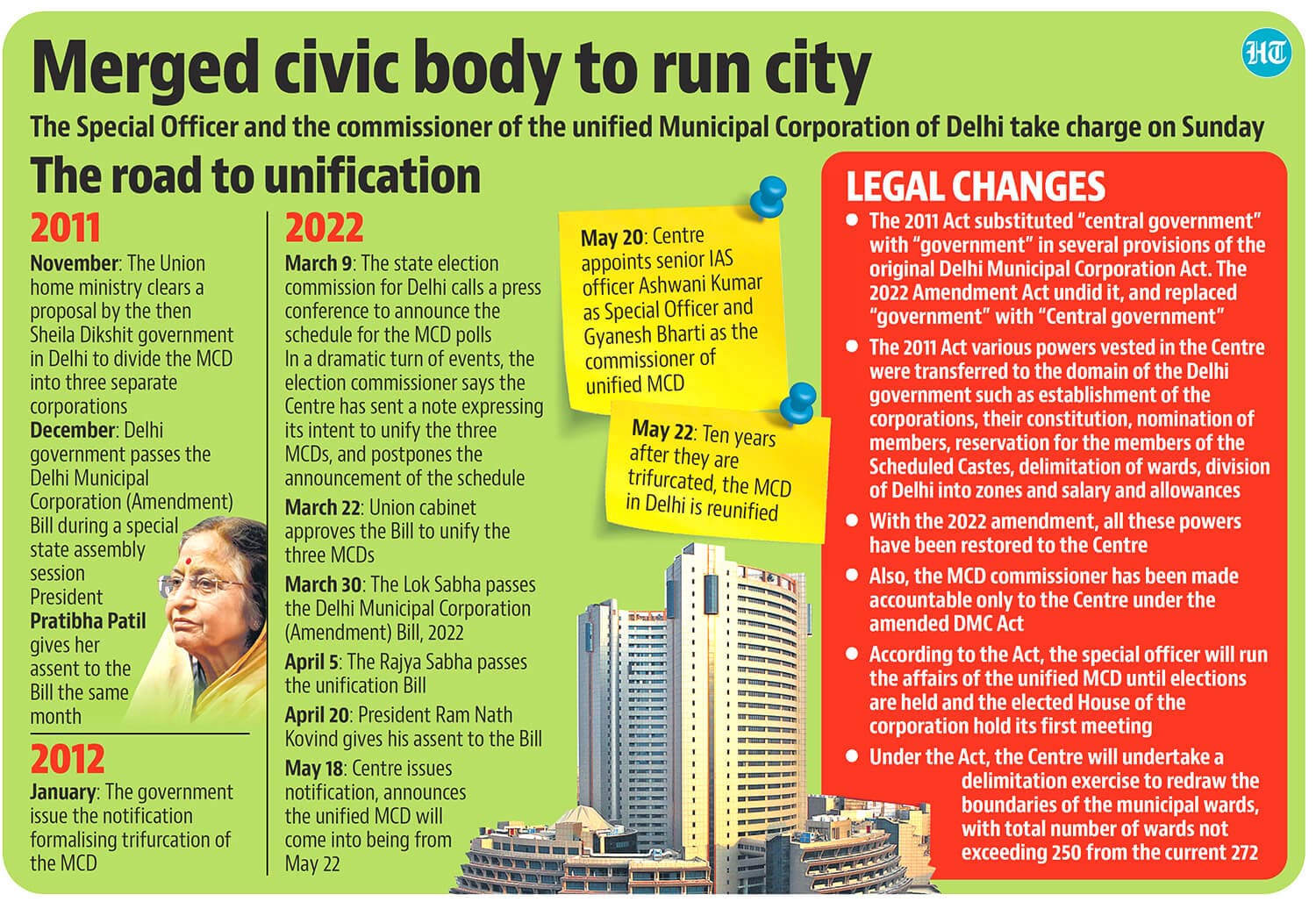 Despite it being a holiday, the Civic Centre on the Jawaharlal Nehru Marg witnessed a lot of activity with the two officers taking charge and meeting several heads of departments. Around 11.15am, Bharti welcomed special officer Kumar and introduced senior corporation officers to him. He also briefed the special officer about the operations of the corporation and about the challenges being faced by the civic body. However, a municipal secretary, which acts as a link between the executive and elected members, is yet to be appointed.

Kumar will run his office from the one that was allocated to the North MCD mayor on the third floor in the A-block of Civic Centre. Bharti will continue to occupy the same office which he had as the south civic body commissioner.

A senior official said new heads of 22 key civic departments will be appointed in the coming week, giving the final shape to the bureaucracy of the unified MCD. Bharti now heads the executive wing of the unified body which represents the interests of around 2 lakh employees and retired municipal workers while Kumar will be responsible for its operations and policy functions with all the powers of the elected wing vested in him.

The website of the MCDs had a common landing page on Sunday, announcing that the three civic bodies, EDMC, North DMC and SDMC are “re-unified into a single entity on 22nd day of May, 2022 as Municipal Corporation of Delhi and the head office of the unified MCD is located at Dr SP Mukherjee Civic Centre, JLN Marg”.

According to a second senior official, Municipal Corporation of Delhi is now one of the largest municipal bodies in the world providing civic services to approximately 20 million citizens of Delhi, and it administers an area of 1,397.3 sq km which is sub- divided into 12 zones — Centre, South, West, Najafgarh, Rohini, Civil Lines, Karol Bagh, SP-City, Keshavpuram, Narela, Shahdara North and Shahdara South.

With the commissioner of the south corporation taking charge of the unified body, SDMC resources and personnel are now emerging as the key nodal points for functioning of the new unified body. The official twitter handle of South MCD has been changed from @Officialsdmc to @MCD_Delhi.

Late in the evening, the conference room attached with the North MCD mayor office was being prepared with screens and projectors for a series of presentations expected to begin from Monday regarding the unified municipal body, its current status of resources and financial challenges. “Improving the revenue share will be the most critical component in these deliberations,” an official said who asked not to be named.

Besides tackling the ongoing financial crisis and salary payment delays for municipal workers ranging from 3-5 months, the new administration will also need to make quick appointments in critical departments, reconstitute offices, bring uniformity in regulations and taxation patterns of areas under the three corporations and carry out administrative reforms, experts and retired officials have said.

The MCD was trifurcated in 2012 by the then Sheila Dikshit government with three separate civic bodies coming into being. It was in March this year that the Centre announced its intent to reunify the civic bodies, and the Parliament passed the enabling law in April.