Water crisis looms as Nangal channel gears up for repairs

Delhi receives at least 232 MGD (million gallons per day) water through the Nangal channel, which helps meet the city’s 25% water requirement, which is estimated to be 935 MGD.
Share Via
Copy Link
BySoumya Pillai

The closure of Nangal hydel channel will cause an “unprecedented water crisis” and even a “law and order” problem in Delhi, Delhi Jal Board (DJB) vice-chairperson Raghav Chadha said, urging the Centre, the Haryana government and Bhakra Beas Management Board (BBMB) to postpone the repair of the water channel scheduled to commence on March 25.

Delhi receives at least 232 MGD (million gallons per day) water through the Nangal channel, which helps meet the city’s 25% water requirement, which is estimated to be 935 MGD.

“The blind closure of the channel will affect supply of 232 MGD (million gallons per day) of water supply from the Beas River to Delhi for one month in March-April. It is 25% of water supply in Delhi and could lead to an unprecedented water crisis and even create a law and order situation,” Chadha said in his letter to the Centre.

Chadha said during summers, Delhi’s water requirement shoots up to 1,000 MGD-1,200 MGD and urged Jal Shakti minister Gajendra Singh Shekhawat to convene a meeting of all stakeholders to discuss the issue at the earliest.

The senior AAP leader added that the Delhi government is in constant touch with the Centre over the issue.

Being a landlocked city, apart from water of the Beas, Delhi also relies on water from rivers Yamuna and Ganga and groundwater aquifers for its water needs. However, the Nangal hydel channel is among the biggest suppliers of water for the city. Chadha warned that if the channel is shut off, the water supply to the President’s residence, the Prime Minister’s house, the Supreme Court, the Delhi high court, the National Green Tribunal and the embassies will also be hit. 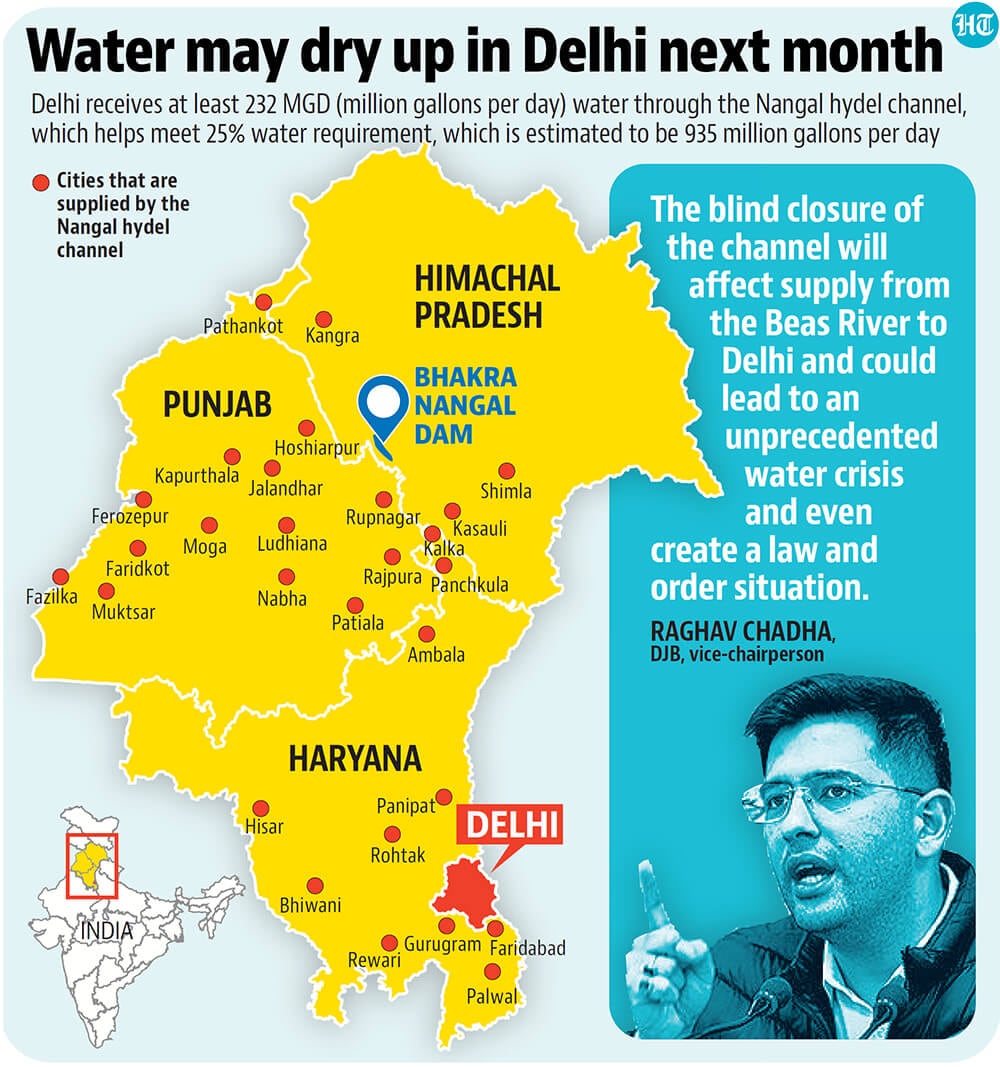 Shalabh Kumar, DJB member (water supply), said the shutdown of the channel has been proposed from March 25 to April 24, for the cleaning of the spill gates of Bhakra and Nangal dams.

“The Punjab government is also asking for a complete closure of the channel because this is a lean period for irrigation for them. They are saying that the channel should be completely closed because a portion of a canal near Nangal in their state is currently lying in a dilapidated condition and they want it to be repaired,” Kumar said.

He said that the DJB is also in talks with the Haryana government to ensure an alternative source of water.

“But the problem is that there is no alternative sources, because during summers the flow of Yamuna is also less. If the work is postponed to monsoons, we can draw additional raw water from the Yamuna (Western Jamuna Canal) to meet the drinking water requirements for Delhi,” Kumar added.

Sanjay Shrivastava, the chairperson of the Bhakra Beas Management Board (BBMS), however said that the channel will not be completely shut off.

“The supply might be slightly affected for such routine repair work, but this channel cannot be completely shut off. The water supply in Delhi will not face any severe impact,” Shrivastava said.

Water flows from Bhakra dam, which is in Bilaspur, Himachal Pradesh, downstream to the Nangal dam where it is controlled and released into the Nangal hydel channel. This channel later becomes Bhakra main line after Ganguwal and Kotla power plants. The Bhakra main line supplies irrigation water to Haryana and the power generated at Bhakra Dam is distributed among Himachal Pradesh, Punjab, Haryana, Rajasthan, Chandigarh and Delhi.

The Haryana government did not respond to requests for a comment on the issue.

“The Nangal channel is a major source of Delhi’s water and there is no doubt that if such a shortage of supply occurs people will extract more groundwater. There is also not enough notice that Delhi can work towards reducing its demands. The agencies should consider that such closure should happen around winters or monsoon when the demand for water is comparatively less,” said Manu Bhatnagar, water expert and principal director, natural heritage division, Intach