Number Theory: The Congress should worry about G-3 more than G-23

On March 5, West Bengal chief minister and All India Trinamool Congress (AITC) leader Mamata Banerjee announced her party’s candidates for the forthcoming West Bengal elections. While addressing the press conference, Banerjee accused the Communist Party of India (Marxist) or CPI(M)-led Left Front and the Congress of having struck a friendship with the Bharatiya Janata Party (BJP). The Left Front and the Congress, along with the newly floated Indian Secular Front (ISF) of Abbas Siddiqui, a Muslim cleric, is the third pole in what many see as an essentially bipolar contest between the AITC and the BJP.

It is in AITC’s interest to portray the main contest as one between it and the BJP; many other anti-BJP parties outside the state have also expressed their support for the AITC. The list so far includes the Shiv Sena, Samajwadi Party, Rashtriya Janata Dal, Jharkhand Mukti Morcha and the Nationalist Congress Party (NCP). Some of these parties are the main challenger to the BJP in their respective states, and also the Congress’s alliance partner in these states. That so many anti-BJP regional parties have decided to support the AITC, whose leader is accusing the Congress of being hand-in-glove with the BJP, does not bode well for the Congress, which, at the national level, is still the biggest (by a distance) opponent of the BJP. There can be two ways of looking at this: it can be dismissed as a state-level local issue or it can be seen as part of a broader pattern, where the Congress’s refusal to come to terms with its shrinking footprint is triggering its alienation from other anti-BJP political formations.

1. Why did the AITC shun the Congress in West Bengal?

Mamata Banerjee walked out of the Congress in 1998 to form the AITC. Eleven years later, in 2009, during the Lok Sabha elections, the AITC struck an alliance with the Congress, to capitalise on growing discontent against the ruling CPI(M), which was facing a barrage of protests after anti-land acquisition protests erupted in Singur and Nandigram. The alliance proved effective and the Left Front could not win a majority of the seats in the state for the first time since 1977. The AITC-Congress alliance went on to defeat the Left Front in the 2011 assembly elections as well. However, as the AITC expanded its support-base, it shunned the Congress in the 2014 Lok Sabha elections and contested on its own, winning 34 out of the 42 Lok Sabha seats in the state. The Congress’s tally came down from 6 in 2009 to 4 in 2014. The Congress decided to ally with the Left Front in the 2016 assembly elections, and increased its seat tally from 42 to 44, although its strike rate went down from 63.6% to 47.8%. The reason? The Left Front conceded more seats to the Congress than the AITC had in the 2011 elections. Even in the 2021 polls, the Congress expects to contest in 90-plus assembly constituencies (ACs). The biggest reason the party has not allied with the AITC, is not ideological differences, but the fact that the AITC would not have given it as many assembly constituencies as the Left Front has. The other anti-BJP regional parties which have offered support to the AITC are not contesting the West Bengal elections. 2. DMK learnt its alliance lesson with Congress the hard way in Tamil Nadu in 2016

J Jayalalithaa created history of sorts in the 2016 Tamil Nadu elections, when she became the first chief minister to return to power since 1984. The All India Anna Dravida Munnetra Kazhagam (AIADMK) won 134 seats against the Dravida Munnetra Kazhagam’s (DMK) tally of 89. The half-way mark in the Tamil Nadu assembly is 118. The difference in seat tally of the AIADMK and DMK was bigger than their strike rates, which were 57.8% and 50%. However, the DMK contested only 178 assembly constituencies compared to the 232 contested by the AIADMK. The Congress, which was the DMK’s biggest alliance partner, contested 41 ACs of which it could win only eight. An analysis of contests where the AIADMK and DMK contested against each other, and where they did not, underlines the fact that the DMK’s alliance partners played a big role in the party’s 2016 defeat. It is no wonder that the DMK and the Congress, along with the other allies including the CPI(M) and the Communist Party of India, have prolonged negotiations on seat-sharing in Tamil Nadu, with the former wanting to contest as many assembly constituencies as possible. Finally, the DMK has agreed to give 25 ACs to the Congress, much less than what it gave in 2016. 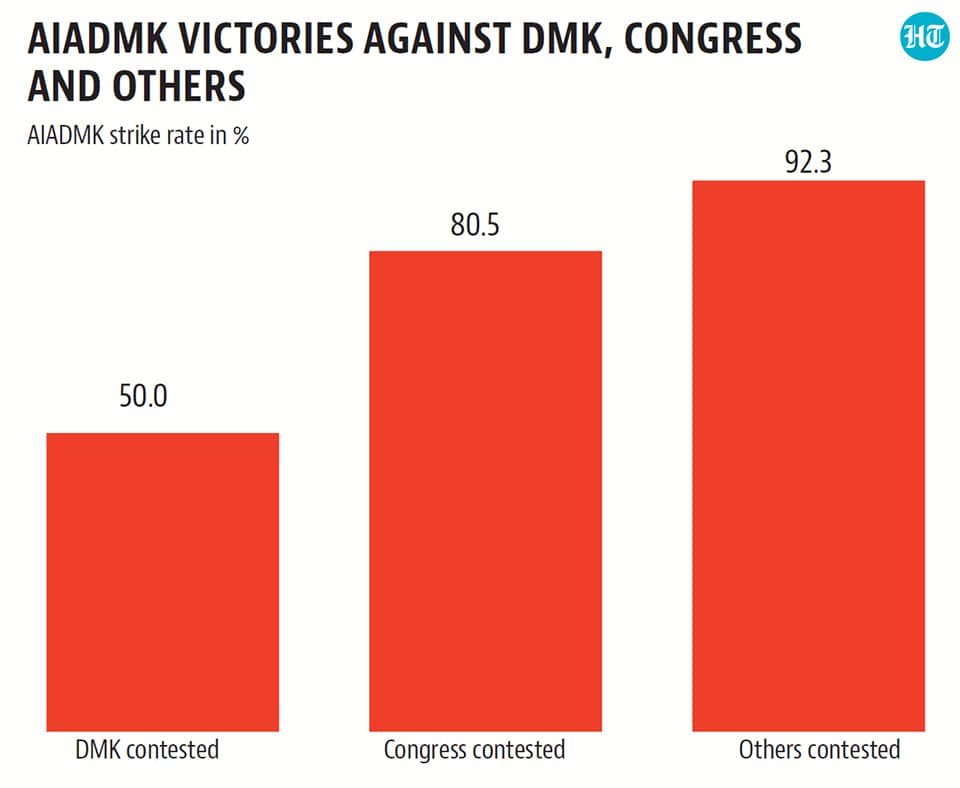 3. Does this mean the Congress has become a liability for its anti-BJP allies?

Not necessarily. Even though the Congress is a shadow of what it used to be, it still commands a sizeable vote share at the all-India level, and is the main challenger to the BJP in eight major states: Haryana, Punjab, Rajasthan, Madhya Pradesh, Chhattisgarh, Gujarat, Karnataka and Assam. The list excludes Himachal Pradesh and smaller states in the north-east. In three other big states, West Bengal (AITC), Maharashtra (NCP) and Andhra Pradesh (YSR Congress Party), parties which have come out of the Congress have outgrown it and are the major challengers to the BJP. When seen in this backdrop, the Congress is fighting what can be termed as a proxy war with its own supporters in these crucial states, which account for 115 out of the 543 Lok Sabha seats in the country. Were the all-India leadership of the Congress to buy peace with these parties — this will only happen if the all-India leadership itself is part of the negotiations — the Congress’s fortunes might improve in the days to come. In recent months, the term G-23, which refers to 23 senior Congress leaders who signed a critical letter regarding the party’s functioning, has been attracting a lot of attention. The Congress’s future will depend more on how it deals with the ‘Group of three’ — Mamata Banerjee, Sharad Pawar and Jagan Reddy — than the G-23.