Johnny Depp’s ex-wife Amber Heard has offered new information about the alleged abuse she faced at the hands of the actor in new court documents, which also include screenshots of text messages.
READ FULL STORY
Hindustan Times | By HT Correspondent

New details from the ongoing legal battle between exes Amber Heard and Johnny Depp have been made public. Heard has offered more details of the alleged abuse after Depp sued her in response to an op-ed she wrote recently. Depp and Heard were married from 2015 to 2017.

According to Buzzfeed News, Heard has alleged in court documents that in 2015, Depp consumed eight MDMA tablets and attacked her physically, choking her and slamming her into a countertop. The tussle resulted in Depp cutting his finger, and then writing messages in blood on a mirror. “We called that version of Johnny, ‘the Monster,’” she said.

Heard obtained a restraining order against Depp a week after filing for divorce in 2016, alleging domestic abuse. Since then, the two have sued and countersued each other.

New documents offer more details about Depp’s alleged addictions and violent tendencies. “Since their divorce, Mr Depp has continued to publicly harass Ms. Heard and attempted to gaslight the world by denying his abuse,” Eric George, Heard’s lawyer, said in a statement, according to Buzzfeed. “It is long past time for Mr Depp’s despicable conduct to end. Today, we presented to the court irrefutable evidence of Mr Depp’s abuse. It is regrettable that it will take a judge to finally end the persistent harassment of Ms Heard by Mr Depp, but Ms Heard will take whatever action is necessary to vindicate the truth.”

Heard has said that in the aftermath of her allegations, she lost work and faced repeated threats in the industry. She recently starred in the biggest hit of her career, the DC superhero film Aquaman, which has made over a billion dollars at the box office. Depp, meanwhile, is currently witnessing a professional slump.

The new documents offer a timeline of Depp’s alleged abuse. In 2013, he set fire to a painting given to Heard by an ex, and hit her on the face, leaving a bloody lip, she says. In 2014, Heard says Depp got drunk on a plane and started throwing things because he was upset about a romantic scene she did for a movie with James Franco. “Instead of reacting to his behaviour, I simply moved seats,” Heard says in the court documents. “That didn’t stop him. He provocatively pushed a chair at me as I walked by, yelled at me, and taunted me by yelling out the name ‘James Franco.’ At some point, I stood up, and Johnny kicked me in the back, causing me to fall over. Johnny threw his boot at me while I was on the ground.”

Heard has shared alleged screenshots of texts Depp sent to her as an apology, appearing as ‘Steve’ for privacy measures.Steve is seen making a reference to an ‘illness’ and writes in the texts, “Once again, I find myself in a place of shame and regret. Of course, I am sorry. I really don’t know why or what happened. But I will never do it again.” 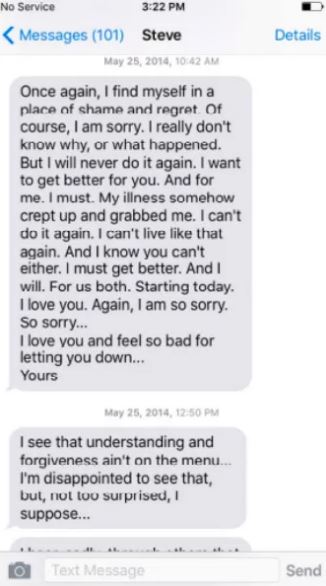 Heard has also shared images of a broken door, which Depp allegedly kicked during a ‘manic episode’ in 2014, and of messages allegedly written by Depp in blood and paint across a mirror. Of a separate incident from 2015, Heard alleges, “He slapped me hard, grabbed me by my hair, and dragged me from a stairwell to the office to the living room to the kitchen to the bedroom and then to the guest room. In the process, he pulled large chunks of hair and scalp out of my head.” She has also shared images of blonde hair lying on the floor.