External affairs minister Sushma Swaraj was trolled on Twitter over a controversy involving the issuance of passport to an inter-faith couple. Swaraj then “liked” over 200 tweets in which she was trolled.

On Sunday, external affairs minister Sushma Swaraj was trolled on Twitter following a controversy involving the issuance of passport to an inter-faith couple. To share with the world what she saw on her feed, the minister “liked” over 200 tweets — which anyone can look by clicking the “likes” tab on her Twitter profile.

A Hindustan Times analysis revealed that 41 BJP parliamentarians, who are either ministers in the union cabinet or elected MPs to the Lok Sabha, follow at least one of the accounts that tweeted out a message which Swaraj had liked to showcase trolling.

To be sure, there’s nothing to suggest that just because Swaraj’s cabinet and parliamentary colleagues follow these accounts, they endorse the tweets posted against the external affairs minister.

Previously, Amit Malviya, head of BJP’s IT cell, has said, “PM following someone is not a character certificate of the person, and is not in any way a guarantee of how the person would conduct himself.” 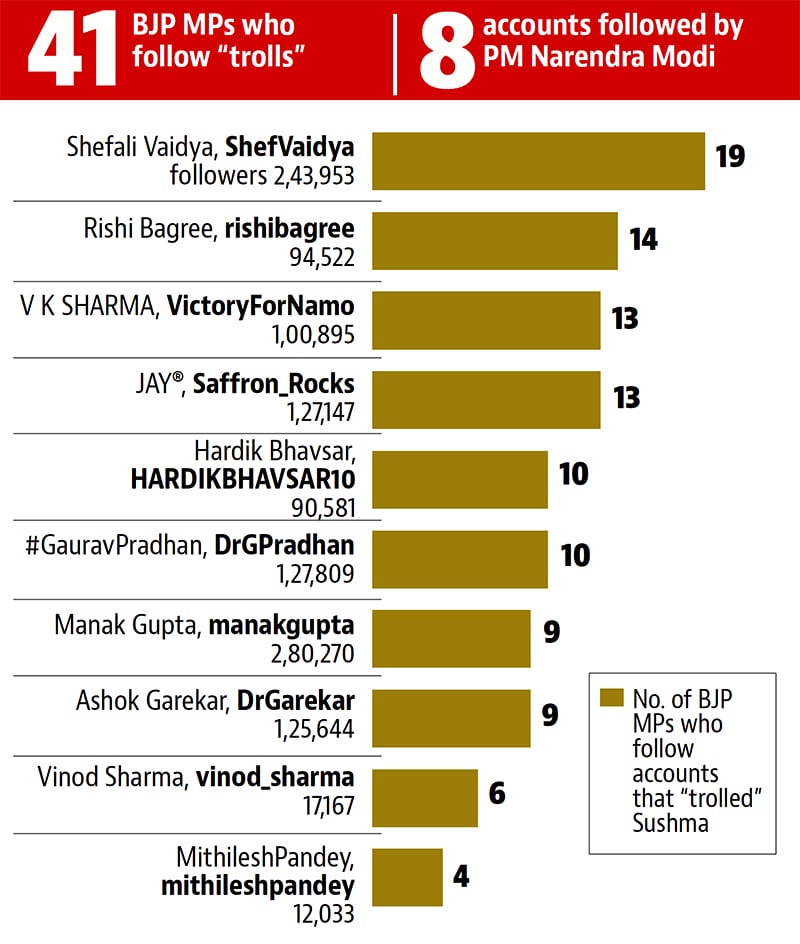 The 211 tweets listed by Swaraj came from 169 accounts. 18 of these accounts are followed by at least one BJP parliamentarian.

“I was out of India from 17th to 23rd June 2018. I do not know what happened in my absence. However, I am honoured with some tweets. I am sharing them with you. So I have liked them,” Swaraj tweeted Sunday.

Which tweets should be classified as trolling or not is subjective and often debatable, but this is among the first time concerns regarding “hateful” messages in the Indian Twittersphere have been raised by a cabinet minister.

The list which the Hindustan Times looked at was curated by Swaraj herself. No modification was made to retain Swaraj’s judgement about the nature of tweets.

The current controversy erupted when Vikas Mishra, an officer in the regional passport office of Lucknow was transferred after he allegedly humiliated Tanvi Seth and Anas Siddique, a Hindu-Muslim couple.

According to reports, he had asked the woman to change her name and her husband to convert to Hinduism. Mishra has contested the allegations of misbehaviour.