Results of byelections to four assembly constituencies - one each in Kerala, Uttar Pradesh, Chhattisgarh and Tripura - will be declared on Friday following counting of votes that started at 8 am. The assembly seats where bypolls were held are Pala (Kerala), Hamirpur (UP), Dantewada (Chhattisgarh) and Badharghat (Tripura). Voting for these seats was held on September 23. LDF’s Mani C Kappen has won Kerala’s Pala seat.In Pala, Dantewada and Badharghat assembly seats, elections were necessitated following the deaths of sitting MLAs KM Mani, Bhima Mandvi and Dilip Sarkar respectively. The disqualification of sitting BJP MLA Ashok Kumar Singh Chandel following his conviction in a murder case necessitated bypoll in Hamirpur. Here are the highlights:

BJP candidate is in lead in Hamirpur with 46810 votes after 23 rounds of counting. Following are the number of votes bagged by other party candidates.

Kerala CM Pinarayi Vijayan hails verdict in Pala. “It is big victory for us. The state government will continue to introduce people friendly measures” he said in Thiruvananthapuram

BJP candidate continues to be in the lead in UP’s Hamirpur assembly seat after 19 rounds of counting. With 38, 996 votes uvraj Singh was leading by over 8,400 votes over his nearest rival of Samajwadi Party. Here is the latest vote count after round 19:

Kappen wins with a margin of 2,943 votes

Mani C Kappen, the LDF candidate, has won Kerala’s Pala assembly seat. He defeated his nearest rival Tom Jose of UDF by over 2,500 votes in the byelection.

Voting trends on Friday showed that in the Pala bypolls, Nationalist Congress Party (NCP) candidate Mani C Kappen, who is being backed by the Left Democratic Front (LDF), was maintaining a consistent lead of over 4,000 votes over United Democratic Front’s (UDF) Jose Tom Pullikunnel.

In Chhattisgarh’s Dantewada assembly bypoll, the candidate of ruling Congress party ahead after seventh round of counting. Devati Karma was leading by 6,101 votes.

Dantewada bypoll: Cong candidate ahead after 5th round counting

In Dantewada bypoll, Congress candidate Devati Karma continues to maintain his lead over his nearest rival after the fifth round of counting. He is leading by 6,108 votes.

BJP candidate ahead in UP’s Hamirpur

Here are the latest results from Badharghat bypolls after the fourth round of counting: 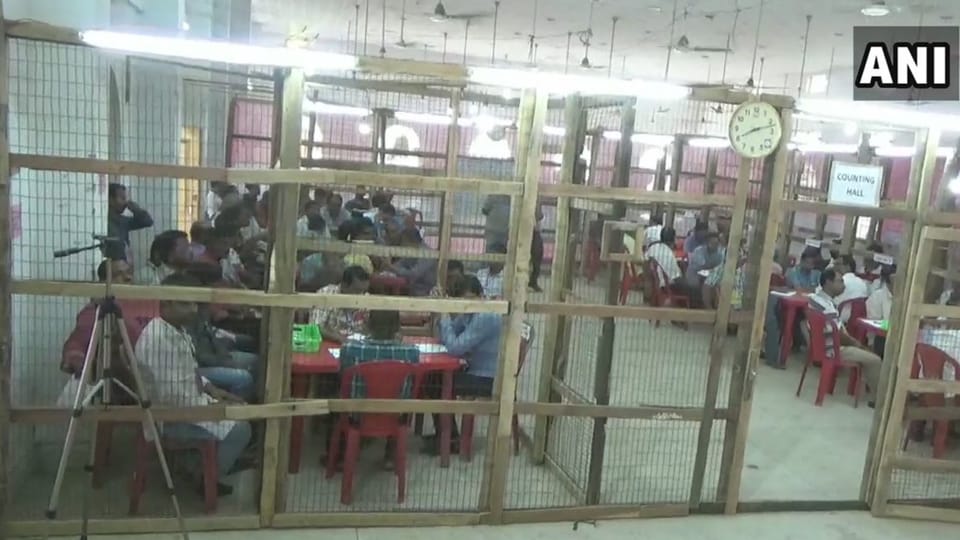 In Badharghat, BJP continues to lead after 3rd round

In Tripura’s Badharghat by polls, the BJP candidate continues to be ahead with 3,748 votes after the third round of counting.

Cong candidate maintains lead after 4th round in Dantewada

In Dantewada seat, after fourth round of counting, Congress candidate was leading by 5,000 votes

In Pala, five rounds of counting over; 6 rounds remain

Five rounds of counting is over in Pala and six more rounds are remaining. LDF’s Mani C Kappan was leading with 17,934 votes, followed by UDF’s Tom Jose with 15,096 votes and NDA’s N Hari a distant third with 5, 264 votes.

In Pala, it appears that infighting in Kerala Congress (Mani) is set to spoil UDF’s chances. Two groups led by Jose K Mani and P J Joseph had openly clashed during campaigning.

After the third round of counting, Congress’ Devati Karma is leading with 4,278 votes.

BJP candidate Mimi Majumdar Das is leading by 3,246 votes in Badharghat assembly by polls in Tripura after second round of counting. The other candidates in the fray are Congress’ Ratan Chandra Das and CPI(M)’s Bulti Biswas, a councillor of Agartala Municipal Corporation.

The LDF candidate has been maintaining lead from the beginning itself. Mani C Kappan lead is over 3,000 votes now.

Ruling Cong and BJP locked in direct fight in Dantewada

The bypoll in Dantewada constituency, reserved for Scheduled Tribe candidate, was necessitated following the death of BJP legislator Bhima Mandavi, who was killed in a Maoist attack on April 9 just three days before the parliamentary elections. The ruling Congress and main opposition BJP are locked in a direct fight in this seat affected by Maoist violence.

51% voters had exercised their franchise, braving incessant rainfall and flood in various areas.

13 candidates in fray in Pala

The polling percentage in Pala was 72 % though voting was extended to one hour due to heavy rains in the area. There are 13 candidates in the fray.

In Pala byelction in Kerala, the LDF candidate Mani C Kappan (NCP) is leading over leading over Tom Jose of the Kerala Congress (Mani).

In Chhattisgarh’s Dantewada constituency, the Congress candidate was leading by 1, 800 votes

By-election to Pala constituency was necessitated following the death of Kerala Congress (Mani) leader K M Mani who represented the constituency from 1965 and retained it till his death in April 2019. The seat saw a fierce three cornered contest between Tom Jose (Kerala Congress), Mani C Kappen (NCP) and NDA’s N Hari.