Delhi schools to reopen next week as curbs lifted

Some of the other curbs on activities that are linked to polluting activities were also slightly relaxed – such as all trucks running on CNG (compressed natural gas) will be allowed to enter from Saturday, but those using conventional fuels will not unless they are carrying essential supplies
Share Via
Copy Link
ByJasjeev Gandhiok, New Delhi

Schools, colleges and other educational institutes will open from next week in the national capital, Delhi environment minister Gopal Rai announced on Wednesday, following growing calls to allow in-person classes to resume to stem the setback to learning caused already by the pandemic.

Some of the other curbs on activities that are linked to polluting activities were slightly relaxed – all trucks running on CNG (compressed natural gas) will now be allowed to enter from Saturday, but those using conventional fuels will continue to be banned from the city unless they are carrying essential supplies.

“For the last three days, we have observed a reduction in the pollution levels in Delhi. We have decided to ease the restrictions, but a strict watch will be kept on the sources [of pollution],” Rai told reporters following the meeting, where it was also decided to allow government offices to call employees on-site. 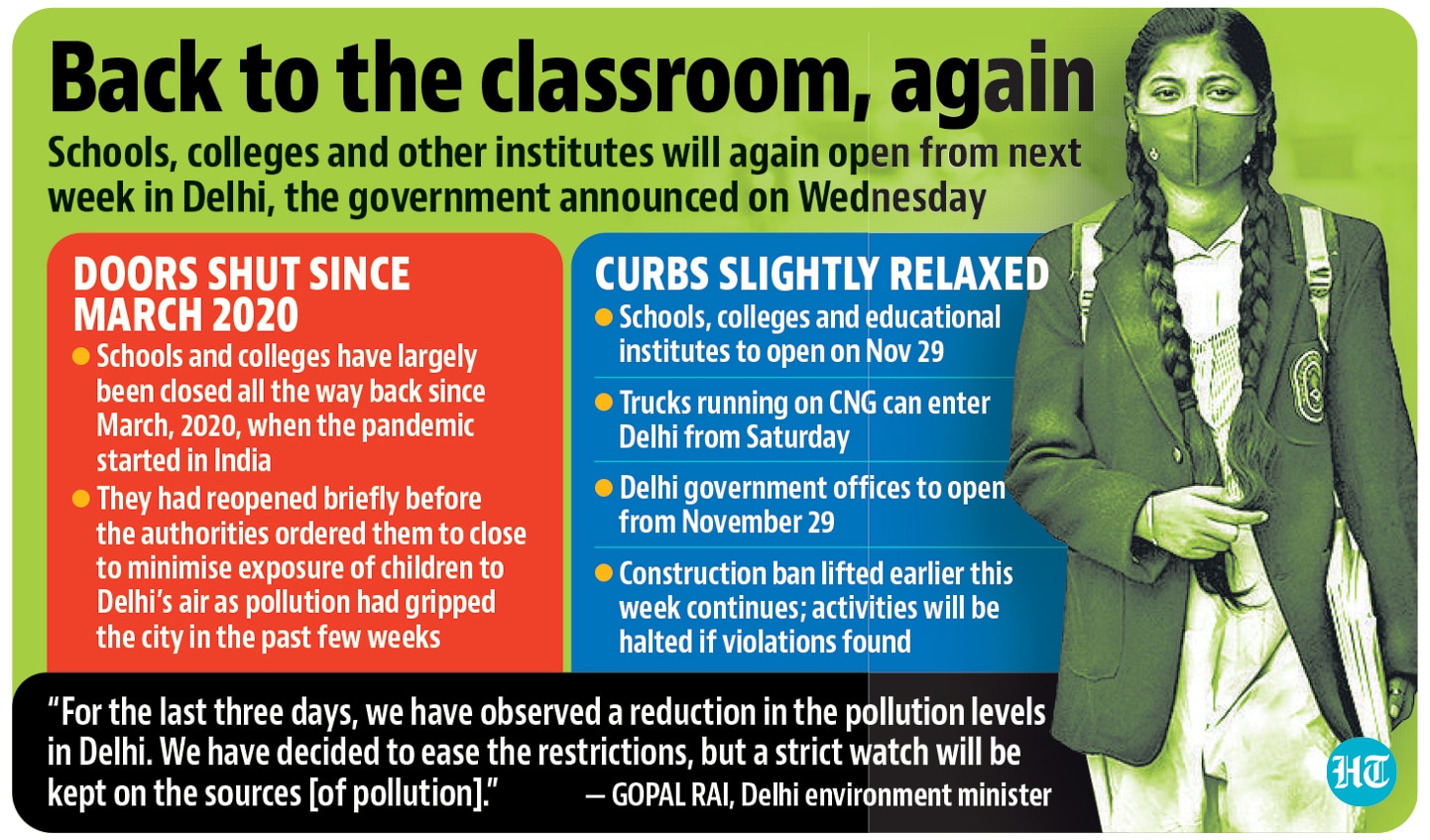 The state government and affiliated offices had switched to working from home for their staff since November 17 to cut down the use of private vehicles after pollution levels skyrocketed, with little pre-emptive measures taken to stop it.

The Supreme Court on Wednesday commented on the flawed approach to tackling of the pollution crisis by authorities in the city, saying that the mainstay measure – the Graded Response Action Plan – appears to require a rethink since it activates only after the situation has worsened.

“You have to have a scientific model based on seasons and wind directions which can reasonably be predicted by the meteorological department. You have super computers now. You prepare a statistical model based on these inputs which will indicate the expected levels of pollution. Then you can take measures on the basis of this model. Why do Delhiites have to suffer severe or very poor level of pollution at all?,” the bench, headed by Chief Justice of India NV Ramana and also including justices Dhananjaya Y Chandrachud and Surya Kant observed.

Ashish Jain, founder and director of Indian Pollution Control Association (IPCA), a non-governmental organisation, says opening schools and colleges is a welcome step moving forward, stating one cannot control pollution in the long run by carrying out micro or major lockdowns. “Lockdown-like solutions are a temporary relief and we cannot shut down schools, colleges or offices for too long. We need effective and long-term solutions to curb air pollution, so that we don’t reach such extreme air quality levels,” he said.

Schools and colleges have largely been closed since March, 2020 – they reopened briefly in the Capital before the authorities ordered them to close to minimise exposure of children to the bad air.

Rai said the government is providing special shuttle buses from the secretariat to nearby metro stations to encourage people to use the metro instead of their own vehicles. “Construction activities have already been allowed, but we are keeping a close watch on the sites. If any violation is found, we will temporarily ban operations and impose heavy fines,” Rai said.

The minister said that till Wednesday, 1,221 construction sites were inspected by 585 teams deployed across Delhi by the government, with 105 sites shut down for violating dust-related norms. “These sites were not adhering to the 14-point guideline we had issued. They have been shut down and a penalty has also been imposed,” Rai said.

Sudha Acharya, the chairperson of the National Progressive School’s Conference, which has over 120 private schools in New Delhi as its members, welcomed the government’s decision to resume in-person classes in school. Acharya said that schooling had been disrupted due to constant closures and it was necessary for students to return to classrooms.

“The reopening of schools was much needed. Students have stayed away from school for a very long time and it’s time that they return to the classrooms,” said Acharya, principal of ITL Public School, Dwarka.

The Delhi government’s decision came on a day when the city’s air quality began to deteriorate as winds weakened. New Delhi’s air quality index (AQI) was “poor” on Tuesday - for the first time since November 1 - with a reading of 290 recorded, according to the Central Pollution Control Board’s 4pm bulletin. The AQI reading shot up to 361– in the “very poor” category - at 4pm on Wednesday.

Anumita Roychowdhury, executive director, research and advocacy at Centre for Science and Environment (CSE), said New Delhi will continue to see variations in the air quality, with meteorological factors playing a key role. To counter that, it is important to ensure strict vigilance so that extreme curbs don’t need to be imposed again, she said.

“Air quality will improve and worsen all through this winter now, but it is important that adequate measures are taken in advance so that we don’t reach those severe [pollution] levels. Pollution from construction sites and garbage burning can easily be controlled. We also need to see what can be done to reduce emissions from the vehicular sector. While the government is trying to promote public transport, it is also turning out to be a big challenge,” she said.

Delhi and the National Capital Region, in an annual winter rerun, has been in the grip of hazardous air pollution as a toxic smog lingers over the Capital and its adjoining cities, leading to a public health emergency. This November has also seen the number of farm fires reaching a new high with the enforcement of a ban on the practice collapsing.