Seasonal AES and JE outbreaks occur in Bihar and eastern Uttar Pradesh between June and September.

At least 106 children have died in Muzaffarpur within days of developing encephalitis (swelling in the brain) and high fever (crossing 104 degrees F within three or four hours), symptoms that rapidly escalated to disorientation, seizures, spastic paralysis, coma and eventually death.

Since all of them had encephalitis symptoms but tested negative for the mosquito-borne Japanese Encephalitis (JE) virus, they were diagnosed with Acute Encephalitis Syndrome (AES), a term used to loosely describe brain inflammation of unknown aetiology.

Once the disease wanes by September, the administration once again falls back on vaccination and lukewarm awareness campaigns till the next outbreak. 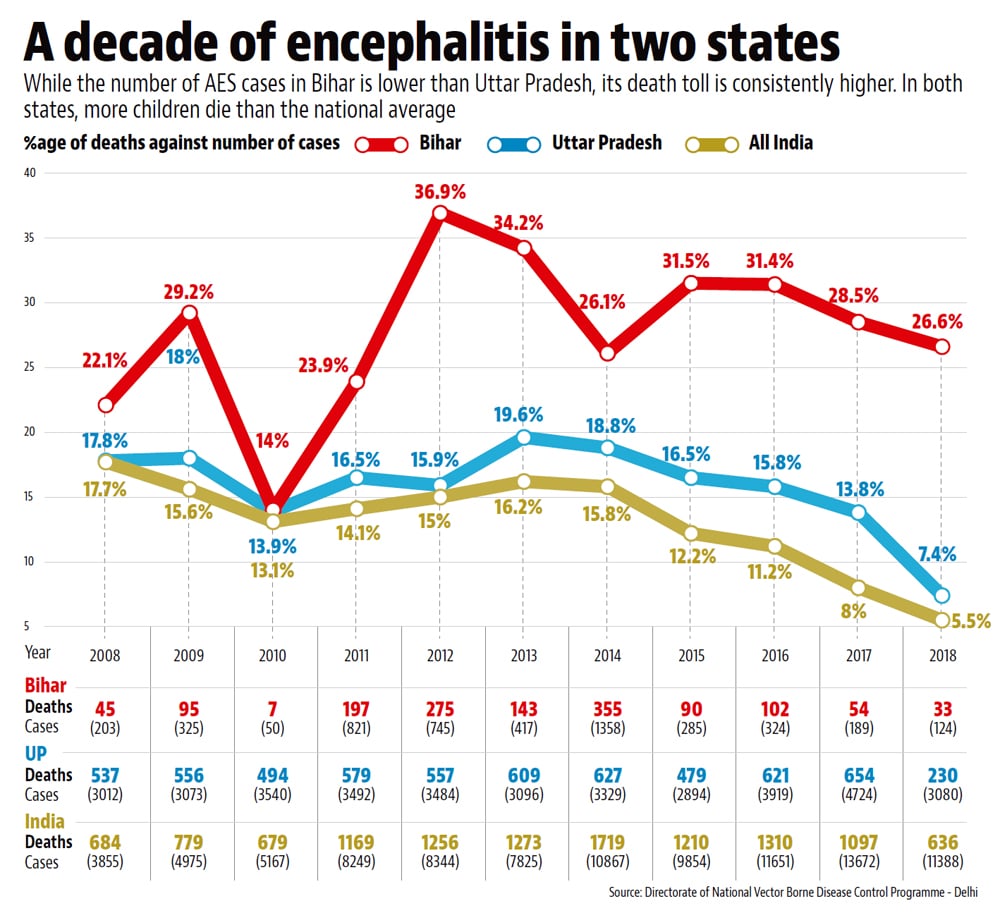 Unlike the JE that is caused by a virus from the flavivirus family that includes the dengue, zika and yellow fever viruses, AES can be caused by a range of factors, including toxins in unripe lychees, viruses, bacteria, fungi, parasites and chemical poisons.

Both diseases disproportionately affect children from poor families in India, with JE infections hitting mostly children 15 years and younger. There are inter-state aberrations, with adults accounting for 80% of confirmed JE cases in Assam in 2013. AES usually affects children under 10 who are severely malnourished.

“Till 2005, all reported AES cases were considered as JE, but when a JE laboratory network was established in 2006, only 15-20% of the total number of encephalitis cases were confirmed to be JE,” said a senior epidemiologist in the Union health ministry who did not want to be named.

“Blood and cerebrospinal fluid samples are tested to confirm JE using that RT-PCR (reverse transcription polymerase chain reaction) technique, which combines reverse transcription of RNA into DNA and amplification of specific DNA targets using PCR,” said Dr Navin Dang, the director of Dr Dang’s Lab. JE is vaccine-preventable, and mass vaccination against the disease is given to at-risk populations.

“Higher death rates can be attributed to delayed care. In Gorakhpur [Uttar Pradesh], the median interval between fever onset and hospitalisation on average is seven days,” said Manoj V Murhekar, director of National Institute of Epidemiology-ICMR, Chennai, whose study linked AES to scrub syphus in India. It was published in the journal Emerging Infectious Diseases.

As a result, around 30% of those affected die and those who pull through develop some degree of permanent intellectual, behavioural or neurological problems, including partial paralysis, recurrent seizures and the inability to speak.

There is no cure and treatment is supportive. In Muzaffarpur, there is a clear link with hypoglycaemia (low blood sugar), which can be treated. “Early detection and treatment of hypoglycaemia is must and a dedicated team of doctors must be placed in endemic PHCs [public health centres] for the outbreak season under NHM [National Health Mission] to treat hypoglycaemia at the facility itself,” said Union health minister Harsh Vardhan.

In other parts of India, scrub typhus (orientia tsutsugamushi ) infection has been identified as a possible causative agent. Scrub typhus infection was found in around 20% of AES cases in Assam in 2016, and a higher 62.7% among AES patients in Gorakhpur in the same year.

“Although intravenous azithromycin has been recommended for AES patients in Gorakhpur since 2014, fatality rates continue to be high, indicating low response to treatment after CNS involvement. Early treatment of patients with acute febrile illness with antimicrobial drugs such as doxycycline before central nervous system manifestations is critical,” said Murhekar.

India seeks answers on Ladakh peace plan. It is a make-or-break question