While Corbevax was approved by the Drugs Controller General of India (DCGI) for administration in children aged 5-12 years, Covaxin was cleared for use in those aged 6-12 years.

India’s drug regulator on Tuesday approved the emergency use of two Covid-19 vaccines, Biological E’s Corbevax and Bharat Biotech’s Covaxin, for children under the age of 12 years – a milestone move that paves the way for that cohort in the country to receive a vaccine shot against the disease for the first time.

While Corbevax was approved by the Drugs Controller General of India (DCGI) for administration in children aged 5-12 years, Covaxin was cleared for use in those aged 6-12 years.

The decision assumes significance as it sets up the stage to protect young children from the coronavirus disease, particularly at a time when schools have opened after nearly two years of closures, which experts have repeatedly stressed have caused considerable learning and social adjustment gaps. 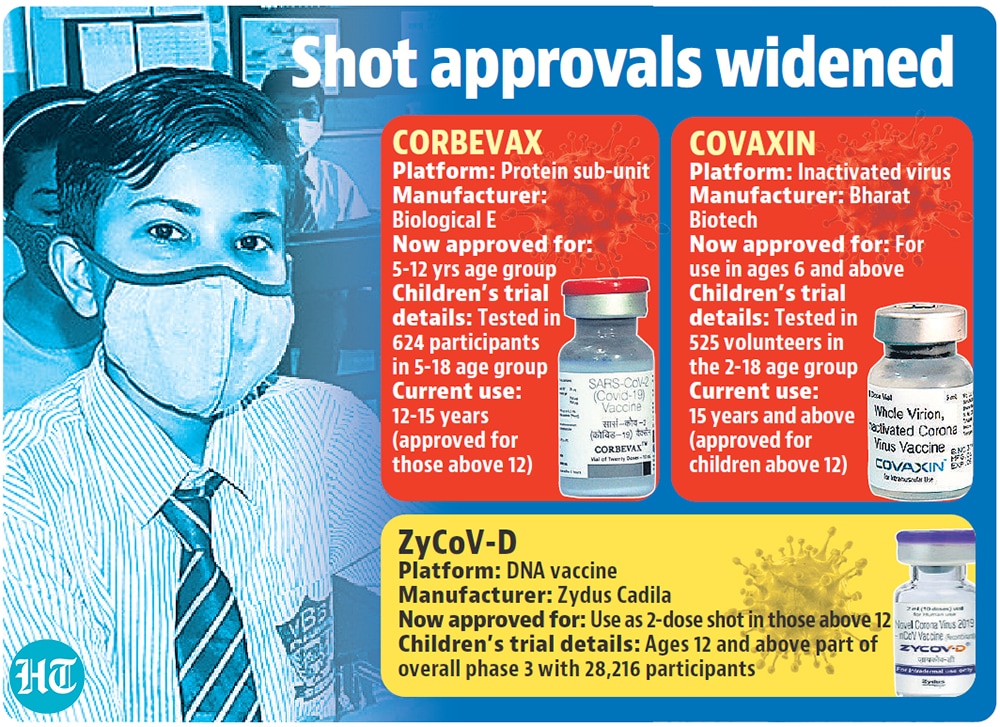 The drugs regulator also approved a two-dose formulation of Zydus Cadila’s vaccine, ZyCov-D – originally a three-dose vaccine approved for 12 and above.

“India’s fight against Covid strengthened further @CSDCO India granted restricted use in emergency situation approval for >6 to <12 age group to Covaxin; >5 to <12 age group for Corbevax; and to ZyCoV-D two-dose formulation for 12 and above age group,” tweeted Union health minister Mansukh Mandaviya.

Currently, Bharat Biotech’s Covaxin, an inactivated whole virion vaccine developed in partnership with Indian Council of Medical Research, is being administered in those aged 15 years and above, while Biological E’s Corbevax, a recombinant protein subunit vaccine developed in collaboration with the Texas Children’s Hospital and Baylor College, in the 12-15 years age group under the national Covid-19 immunisation programme.

Government officials said that the final decision on when to start jabbing children under 12 years of age in the national vaccination scheme will be come after formal recommendations made by the government’s National Technical Advisory Group on Immunisation (NTAGI) and the National Expert Group on Vaccine Administration for Covid-19 (NEGVAC).

“This is the drugs regulator’s approval; the next step will depend on what NTAGI and NEGVAC tell us. The government will act on their recommendations,” a senior government official aware of the matter said. Once these two bodies also recommend the vaccines for the age group, the Union government can incorporate the shots in the national immunisation programme.

In October last year, the subject expert committee of the central drugs standard control organisation approved, with certain riders, the use of Covaxin in children aged 2-18 years after trial data in children was found at par with that generated in trials among the adult population. However, on December 25, DCGI only gave its initial approval for Covaxin for minors aged 12-18 years.

Covaxin, which has been part of the vaccine drive among adults since January 16, 2021, is administered in two doses, four to six weeks apart. Of the nearly 1.89 billion doses administered across the country till date, nearly 315 million shots have been Covaxin, according to government data. The most doses, nearly 1.53 billion, have been of the Oxford-AstraZeneva vaccine Covishield.

Biological E approached the national drugs regulator with clinical trial data on younger children in March, and on April 21, the subject expert committee recommended Corbevax for emergency use in children aged 5 years and above. Two doses of Corbevax are administered through an intramuscular jab spaced 28 days apart.

The Corbevax trial response shared by the company showed that the vaccine induced immune response indicative of over 90% effectiveness against the ancestral strain; while at least 80% in the case of the Delta variant. Till date, 31.7 million shots of Corbevax have been administered to the 12-15 age group in the country, according to government data.

Bharat Biotech’s phase 3 clinical trials data of Covaxin was found to be 77.8% efficacious, according to the safety and efficacy analysis data published in medical journal, The Lancet, last year. The company on Tuesday said that clinical trials in children documented seroconversion at 95-98%, four weeks after the second dose, indicating superior antibody responses in children when compared to adults.

“We have established Covaxin as a universal vaccine for adults and children. Safety of the vaccine is critical for children and we are glad to share that Covaxin has now proven data for safety and immunogenicity in children. We have achieved our goal of developing a safe and efficacious Covid-19 vaccine for adults and children,” said Krishna Ella, chairman and managing director, Bharat Biotech.

Among other vaccines deployed across the world against Covid-19, the Pfizer jab is being administered among children aged 5 years and above in the US. The company, however, is testing their vaccine in younger children, and is expecting results soon.

In India, DCGI approved ZyCoV-D vaccine in August for emergency use after it was tested in children 12 years and above. The vaccine, however, is yet to be introduced under the national immunisation programme due to production issues. On Tuesday, the drugs regulator approved its two-dose formulation; originally, the vaccine was approved as a three-dose formulation to be administered in gaps of four and eight weeks from the first shot.

Experts stressed that preference should be given to children with comorbidities, irrespective of whether or not they have been infected or suspected to be infected in the past.

“All children with comorbidities should be vaccinated with any available vaccine irrespective of infection history. We know most children in India are already infected and will be reinfected many times in their life, but it makes sense to vaccinate children who have not been infected based on data from the West,” said Dr Gagandeep Kang, senior vaccine expert, and faculty member, Christian Medical College, Vellore (Tamil Nadu).

“This will bring huge relief to parents who have been worrying about re-opening of schools and rising number,” said Dr Anupam Sibal, senior paediatrician, and group medical director, Apollo Hospitals.

Get Latest India Newsalong with Latest Newsand Top Headlinesfrom India and around the world.
SHARE THIS ARTICLE ON
Topics
covid-19 covaxin
covid-19 covaxin
Subscribe to our best newsletters
Subscribed to newsletter successfully
Thank you for subscribing to our Daily News Capsule newsletter.