Kerala reported 31,445 Covid-19 cases on Wednesday, with a test positivity rate (TPR) of 19.03%, both the most in three months, suggesting that experts’ fears about the Onam effect may not have been misplaced.

“We expected a hike after Onam. A special drive is on to increase testing and vaccination. Since sero prevalence is very low in Kerala we have to find the infected and quarantine them at the earliest. We will do everything possible to contain the surge,” said state health minister Veena George.

Kerala’s biggest festival Onam was celebrated last week; the government relaxed restrictions for it, despite the state being an outlier in terms of positive cases over the past few months. Markets were jam-packed ahead of the festival; last year too, the state saw a surge in cases after Onam. 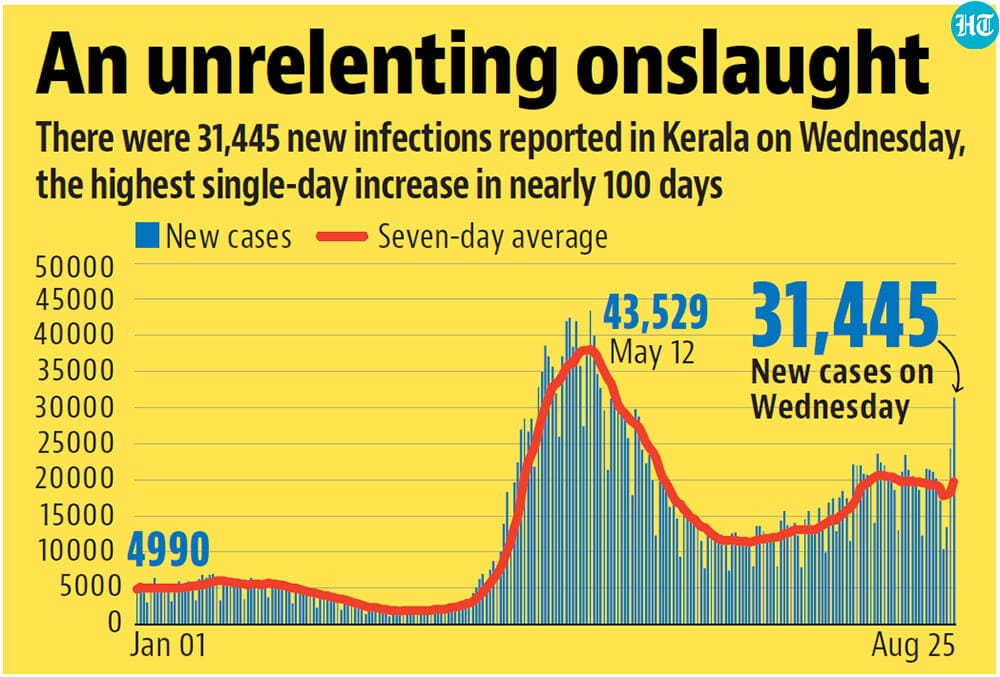 The fourth round of the sero survey conducted by the Indian Council of Medical Research in July showed antibody prevalence was 67. 7% nationally but it was only 42.7% in Kerala, meaning a huge chunk of its population is still susceptible to the virus. However, this theory is yet to be proven, and ICMR itself has said it does not make sense to disaggregate its overall sero-prevalence number across states.

What is evident -- but again, not established -- is that Kerala, which escaped the brunt of the second wave in April and May is now seeing it, with infections likely being driven by a variant of the SARS-CoV-2 virus. If there’s a silver lining it’s the state’s vaccination numbers: 47.5% of the eligible population have received at least one dose of the vaccine and26.8% have been fully vaccinated. These are among the best numbers in the country for a mid-sized state.

On Wednesday, the state reported 215 deaths taking total fatalities to 19,972. The number of active cases in the state as on Wednesday evening, was 170,292.

Many hospitals have started feeling the pinch; government hospitals said only 10% of their beds are available, but added that there is no shortage of oxygen or essential medicines. The ICU occupancy (both private and public) is stable, the government claimed: 2,080 patients are in ICU and 780 are on ventilators. Out of 14 districts, four reported more than 3,000 fresh cases. Highest cases were reported from Ernakulam (4,048) followed by Thrissur (3,865) districts.

Experts have asked the state to move away from cheap antigen tests and conduct more RT-PCR tests; the latter are considered the gold standard in testing. On Monday, Tamil Nadu conducted 1,52,000 RT-PCR tests and Karnataka 91,982 while Kerala’s share was 86,650. “The surge is on expected lines. The government will have to increase tests and vaccinate more people,” said Dr N M Arun, an internal medicine expert who has been tracking the case trajectory of the state.