Home / India News / Imran Khan UNGA 2019 Highlights- Terrorism has nothing to do with any religion: Pak PM on Islamophobia
india news

Imran Khan UNGA 2019 Highlights- Terrorism has nothing to do with any religion: Pak PM on Islamophobia

Prime Minister Narendra Modi is asddressing the 74th United Nations General Assembly session in New York. Through the week the Prime Minister held bilateral meetings with US president Donald Trump and other world leaders, including Iranian President Hassan Rouhani, German Chancellor Angela Merkel, Italian President Giuseppe Conte and Emir of Qatar Sheikh Tamim bin Hamad.In his address, the Prime Minister spoke about the need to deal with climate change at the earliest and emphasised on how India’s message to the world is that of harmony and peace, not dissension. Pakistan Prime Minister Imran Khan take the stage, where he is likely to raise the Kashmir issue.India will exercise its “right of reply” to respond to Pak PM Imran Khan’s speech in the UNGA session. Follow highlights here

Islamophobia has grown at a pace which is alarming: Imran Khan

Pakistan Prime Minister raised the issue of Islamophobia after the 9/11 attacks. He said that Islamophobia has grown at a pace which is alarming. It is creating a divison, he said.

“Terrorism has nothing to do with any religion,” Pak PM added.

Pak PM Imran Khan stressed that every year a huge amount of money leaves the poor countries and reaches richer countries of the world which in turn is widening the gap between the rich and poor. “This developing world is devastating. It is causing more poverty and deaths,” he added.

“Congratulatory messages pour in after the @UNGeneral Assembly speech and so do the selfie requests.

Those who were able to witness PM @narendramodi’s speech at the UN personally convey their good wishes to him, the Prem Minister’s office tweeted after PM Modi’s address at the 74th UNGA address. 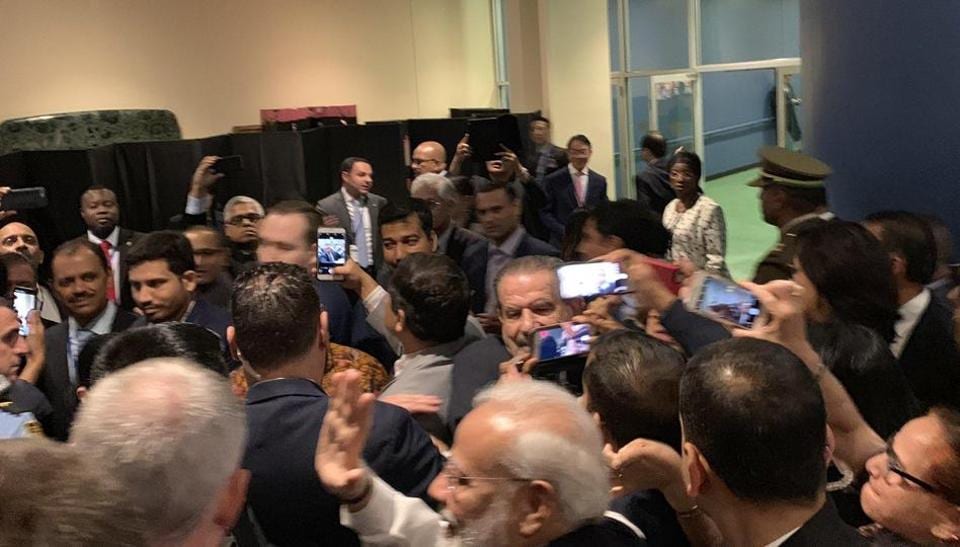 Harmony and peace, not dissension is our message: PM

“Harmony and peace, not dissension is our message,” Prime Minister Narendra Modi said in his UNGA address.

The world is going through a new era: PM Modi

“The world is going through a new era,” Prime Minister Narendra Modi said in his UNGA address, adding that with the kinds of changes that are coming up in the social life, personal life, economy, security, connectivity and international relations owing to technological advancement, countries do not have the option to confine themselves within their boundaries.

Our efforts, results for everyone: PM Modi

Out motto is “sabka sath, sabka vikas”, Prime Minister Narendra Modi said in his UNGA address. “When I look at other countries like India that are working and heading towards development, my resolution “our efforts, results for everyone ,” becomes even stronger, the Prime Minister said in New York.

PM gets applause for no use single plastic pledge

In his UNGA address, Prime Minister Narendra Modi pledged to push for no use single plastic and was appluaded fo his pledge.

This year, the world’s biggest democracy held the world’s biggest election in which the people of the country voted for me and my government becasue of which I got the opportunity to be here, the Prime Minsiter said as he began his address at the 74th UNGA session.

PM Modi up next

PM Narendra Modi will be shortly adressing the UNGA session. Lesotho PM Thomas Motsoahae Thabane is currently delivering his speech, PM Modi is up next.

Imran Khan to address a while after PM Modi

Pakistan Prime Minister Imran Khan is expected to deliver his speech at the 74th UNGA a short while after PM Narendra Modi. The Pakistan PM is likely to bring up the Kashmir issue in his speech, to which India will respond exercising its “right of reply.”

At SAARC meet, Jaishankar says elimination of terrorism a precondition for survival

In his address at the SAARC meet, minister of external affairs S Jaishankar said that the survival of South Asian countries depends on elimination of terrorism.

Ahead of PM Narendra Modi’s speech at the 74th UNGA, the PMO tweeted “All set for the @UN General Assembly session!,”

He is expected to begin his address at around 7:30 pm.

In PM Modi’s address at the 74th UNGA, climate and development are likely to be the big focus.

On Monday, while addresing the UN climate Action summit the Prime Minister had emphasise the time for talking is over and the world needs to take action now.

Modi pushed for a comprehensive approach to deal with climate change and called for a “global campaign to forge behavioral change.”

Prime Minister Narendra Modi will shortly address 74th United Nations General Assembly in New York. he is expected to deliver his speech at around 7:30 pm.