Looking forward to holding talks with His Highness Crown Prince @MohamedBinZayed and discussing the full range of friendship between India and UAE.

Deepening economic relations will also be on the agenda during this visit. pic.twitter.com/gpFmCeulj6

“All of you know that on September 7, India’s ‘Chandrayaan’ is going to land on the surface of moon. The entire world is discussing India’s space missions today. The world is astonished that how are we able to gain these results in such small budget, using only our skills,” said PM Modi.

“India has decided that we will multiply the size of our economy by twice in the upcoming 5 years. 5 trillion dollars economy in the target in front of us,” PM Modi said.

‘Do you feel there is a change in India’s attitude?’: PM Modi asks the Indian community of Bahrain

‘Will visit Shrinathji Temple to pray for this country’s prosperity’: PM Modi

“I will visit Shrinathji Temple tomorrow and will pray for peace and prosperity in this country. It is also a matter of happiness that renovation of this temple will also officially begin tomorrow,” said PM Modi.

PM Narendra Modi addressing Indian community in Bahrain: “It is the sacred festival of janmashtmi today. I wish you and the entire Indian community across the world on ‘Krishna Janmotsav’.”

‘Fortunate to be the 1st Indian PM to visit Bahrain’: PM Modi

PM Narendra Modi addressing Indian community in Bahrain: I realise that it took quite a long time for an Indian Prime Minister to visit Bahrain. However, I have been fortunate enough to be the 1st Indian PM to visit Bahrain.

MEA: 20 of the most prominent NRI businessmen were present during Rupay card’s launch and agreed to support this initiative. They also expressed their strong support for participating in the Jammu & Kashmir invest event which is being planned, through investment and human resource development. :ANI

‘Rupay card being launched in Middle East for the first time’: MEA

Ministry of External Affairs: Prime Minister Narendra Modi’s first engagement in the United Arab Emirates was the launch of Rupay card, it is the first time the Rupay card is being launched in the Middle East. :ANI

Prime Minister Narendra Modi meets Prince Khalifa Bin Salman Al Khalifa, the PM of Bahrain, in Manama. This is the first-ever visit by an Indian PM to Bahrain. 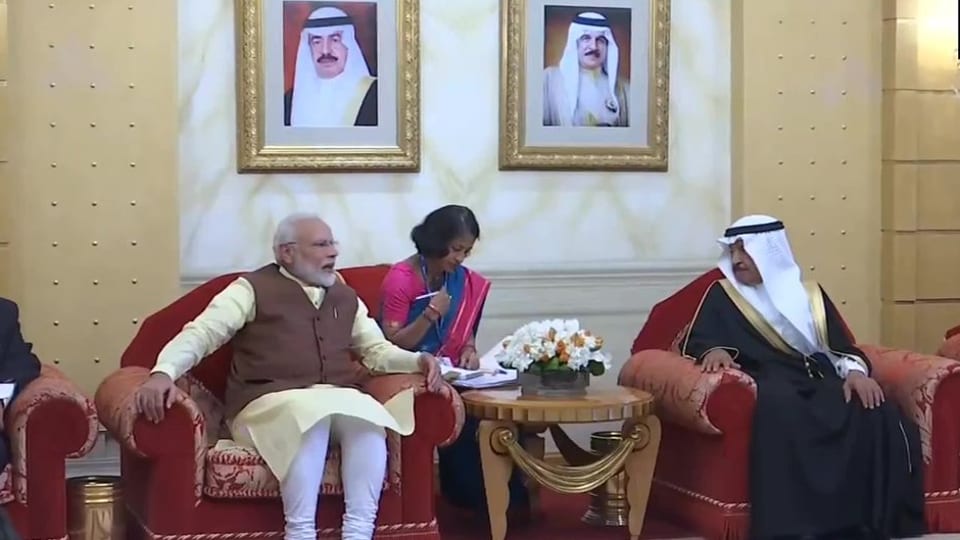 ‘A new energy in the relationship’: Raveesh Kumar

A new energy in the relationship, tweets Raveesh Kumar:

A new energy in the relationship

His Highness Crown Prince @MohamedBinZayed to PM @narendramodi : I am so grateful that my brother is coming to his second home. pic.twitter.com/tKcm8C77RT

A relationship built over generations!

PM @narendramodi interacting with the NRI business community in UAE at a Business Roundtable in Abu Dhabi. Urged them to look at the business opportunities available in India. pic.twitter.com/wr00N4UXGK

Narendra Modi arrives in the UAE on Friday

Prime Minister Narendra Modi arrives in the UAE on Friday. Modi reached UAE capital Abu Dhabi from Paris on the second leg of his three-nation tour to France, UAE and Bahrain.