Narendra Modi in Varanasi Highlights| ‘Every house had a Modi’: PM on BJP’s poll sweep

After the Bharatiya Janata Party’s (BJP) landslide victory, Prime Minister Narendra Modi is in his Lok Sabha constituency of Varanasi on a thanksgiving visit on Monday.He marked his visit by offering prayers at the Kashi Vishwanath temple before heading to address party workers.Modi won the Varanasi parliamentary seat by a margin 4,79,505 votes, defeating his nearest rival Shalini Yadav of the Samajwadi Party.Follow highlights here:

PM Modi thanks party workers, voters and UP at the end of his speech

PM Modi thanks the workers for their hard work and contribution at the end of his speech, thanks Varanasi voters and the whole of Uttar Pradesh.

PM Modi says BJP’s vote percentage is increasing, be it Ladakh, Kashmir Valley or Kerala but the political pundits still call us a Hindi heartland party. Says all government institutions , be it a government school or hospital, belong to the citizens, says it is our duty to improve them.

PM says he is proud of the country’s ancient heritage. We have tried to move forward, give equal importance to both our great heritage and modern vision. Says, we need to respect our culture and think of the future.

Wherever we got a chance, the Opposition’s voice has been heard, however small the numbers, gave them respect: PM Modi. The poor and common man had to wait for a long time for their voice to be heard. They were protesting but it got buried under the vote bank politics. We heard them and that is why gave 10% reservation for economically weaker section, never discriminated between beneficiaries, says PM.

We in BJP have faced two challenges, says Modi

We in BJP have faced two challenges, says Modi. Our workers have been killed for their ideology, says Modi, gives examples of Tripura, West Bengal and J-K. Adds, political untouchability is increasing by the day. He said that political detractors created perception about the BJP that it is untouchable. It is shameful and anti-democratic. Says BJP is the only party that follows and cares for democracy.

There has to be a synergy between the organisation and government. The government’s responsibility is to do work. And when a worker joins this, it creates a miracle. Work and worker creates a wonder, says PM. Work and workers are the biggest catalysts.

No alternative to transparency and hard work: PM Modi

There is chemistry beyond poll arithmetic: PM Modi

UP is giving new direction to politics, says PM Modi. Adds, 2014, 2017 and 2019 hattrick is not small. Even after this, if the eyes of political pundit do not t open, their ears do not hear the sound, then they are living in 20th century. Political pundits have to agree that there is chemistry beyond poll arithmetic.

When I interacted with party workers, I had said that while one Narendra Modi filed nomination but the election will be fought by Narendra Modi in every home.: PM Modi. You all became Narendra Modi and ran the whole campaign. Praises the workers, says they passed with distinction marks.

PM Modi begins his address to party workers in Varanasi. Says, as a BJP worker, I try to fulfil the demands made of me. A month ago, when I was here on April 25, Kashi’s image impressed the whole country. All of you ordered me not to come to Varanasi for a month, and as a BJP worker, for me your order was most important. On May 19, I wanted to come to Kashi but since I had been asked not to come to Kashi, I decided to go to Kedarnath. There would have hardly been any candidate who was so carefree as I was during the polling and results because I trusted you.

Amit Shah says, country’s people have blessed the PM. Says, despite the sweltering heat, people of Varanasi welcomed him and turned up fo his road show.

Amit Shah talks about the development of Kashi under Narendra Modi as its MP. Says, Modi transformed Kashi in last five years while maintaining its ancient essence.”

‘The nation has begun a new journey under PM’s leadership’

Taking a jab at congress general secreatary Priyanka Gandhi, without taking her name, Yogi said that many people wanted to contest election from Varanasi. But they gave up their intention seeing the heat of PM Modi’s Road show. Adds, “The nation has begun a new journey under the leadership of PM Modi, the whole country is with him in this journey.”

UP chief minister Yogi Adityanath addresses the gathering, welcomes PM Modi on behalf of party workers. Says, all efforts in forms alliance and grand alliance to stop Modi bit the dust because the PM worked tirelessly for five years.

After offering prayers in a detailed ritual, Prime Minister Narendra Modi left the Kashi Vishwanath temple. PM Modi’s cavalcade moved slowly, as the swelled up crowd flanked both sides of the road. 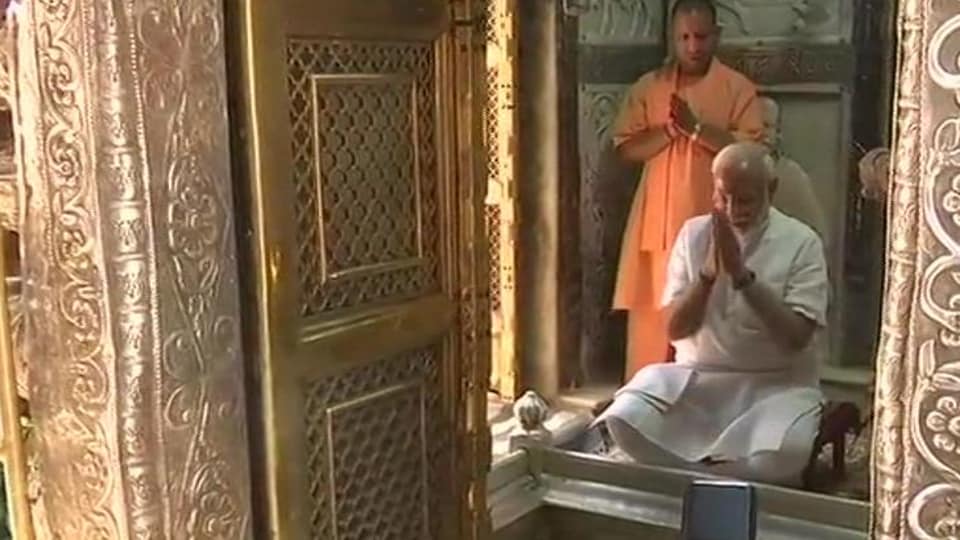 #WATCH Varanasi: Crowd breaks into chants of 'Modi Modi' as the convoy of PM Modi moves through streets of Varanasi to Kashi Vishwanath temple. pic.twitter.com/YW0t5dkQPP

Artists perform in Varanasi ahead of PM Modi’s visit 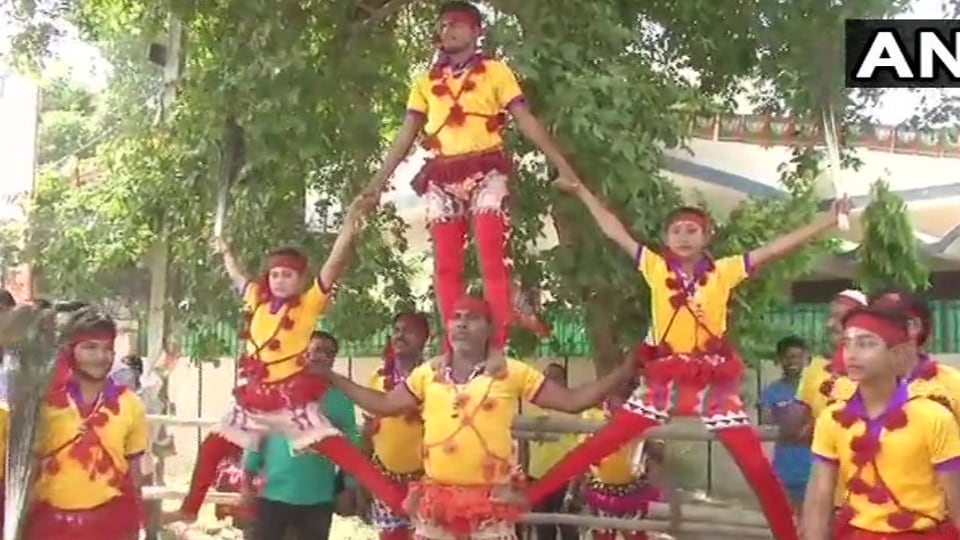 Prime Minister Narendra Modi was seen waving from his car on his way to Kashi Vishwanath temple.

Crowd queues up as PM Modi heads to Kashi Vishwanath

The crowd outside Kashi Vishwanath temple - first stop on PM Modi’s visit to Varanasi is growing as several wait for PM Modi to reach temple. 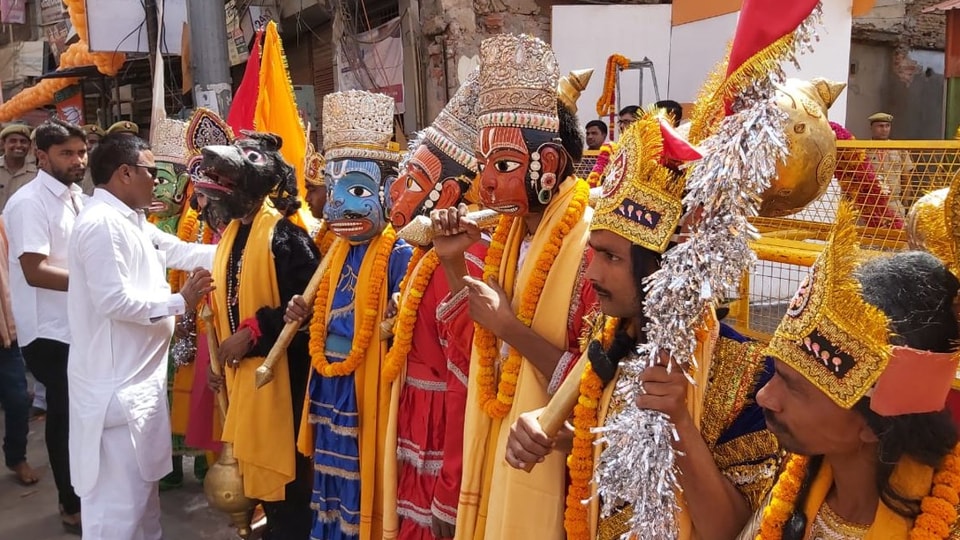 PM Modi’s thanksgiving visit is likely to include a road show, according to the sources in BJP. BJP workers plan to shower petals on Modi on the way to the Kashi Vishwanath temple.The BJP’s Kashi region spokesperson Navratan Rathi said preparations to give a grand welcome to Prime Minister Narendra Modi have begun.The preparations will be completed by Sunday evening.

Prime Minister Narendra Modi paid a visit to his mother in Gandhinagar on Sunday and sought her blessings after the BJP’s massive victory in the Lok Sabha elections 2019. PM Modi and BJP chief Amit Shah had arrived in Gujarat on Sunday on a two-day visit. The PM addressed his first rally on Sunday after the poll victory. He was welcomed by a huge crowd at the rally venue in Ahmedabad.

PM Narendra Modi reached Varanasi on Monday morning. He was received by Chief Minister Narendra Modi, UP Governor Ram Naik and BJP President Amit Shah. He will offer prayers at the Kashi Vishwanath temple which will be followed by a meeting with party workers later at 12 noon.

On Monday, Varanasi was all decked up to welcome Modi with BJP flags and posters everywhere. Cleaning and maintenance work has been completed.

On Sunday, Uttar Pradesh Chief Minister Yogi Adityanath held a meeting with local administration officials in Varanasi to assess preparations made ahead of Modi’s visit here.