Sabarimala temple gates opened at 5 pm on Wednesday as protests against the entry for women devotees of menstrual age turned violent.Despite the Supreme Court order, no women turned up at the opening of the temple.Earlier in the day, clashes erupted as protesters tried to stop women the temple, with police waving batons charging stone-throwing protestors.The protesting group of devotees had been staging a sit-in chanting Ayyappa mantra in the shelter in protest against the Supreme Court order permitting women of all age groups to enter the shrine.Here are the highlights:

Bus carrying journalists, others vandalised near Nilakkal base camp

Kerala: A bus, carrying journalists among other passengers, was vandalised at Laka near Nilakkal base camp by protesters this evening. Stones were pelted on the bus. #SabarimalaTemple pic.twitter.com/5JVJtRLLmQ

#WATCH #Kerala: Police personnel vandalise vehicles parked in Pampa. Incidents of violence had broken out today in parts of the state over the entry of women of all age groups in #SabarimalaTemple. pic.twitter.com/xi3H4f5UUU

Security tightened in Pamba and Nilakkal

DGP Lonknath Behera said 700 additional police personnel had already been deployed in Pamba and Nilakkal, the base camps of Sabarimala pilgrimage, to maintain law and order and ensure the safety of devotees proceeding to the temple.

“At least 700 armed police personnel, 100 of them women, are already placed in various locations. A team of commandos will also be deployed soon,” he said.

Prayers being offered at Sabarimalatemple

#WATCH: Prayers being offered at #SabarimalaTemple after its portals opened at 5 pm; devotees can offer prayers till 10.30 pm today. #Kerala pic.twitter.com/rBuneRDatN

RSS-BJP is behind all of this: Kerala minister on violence

10 KSRTC buses were damaged. Devotees from other states were beaten up & sent back. RSS-BJP is behind all of this. Supreme Court rule applies to all, the govt is just following & implementing it: EP Jayarajan, Kerala minister on incidents of violence today. #SabarimalaTemple pic.twitter.com/XTMAYJVQIm

Section 144 declarerd in 4 areas including 2 base camps

After violence, Section 144 was declared in four areas including two base camps.

Sabarimala temple gates open amid protests with no women in the menstruating age group in the queue.

The devotees can offer prayers till 10.30 pm today. The portals remain open till 22nd October.

A female journalist from CNN NEWS 18 was attacked by protesters, who smashed the windows of the car she was travelling in in view of the police, footage from the channel showed.

Saritha Balan, a journalist from online publication The News Minute, was kicked by protesters while accompanying devotees trying to access the site, she told Indian TV, while camera crews from several other channels had their vehicles vandalised.

ANI says its reporter Ayushmaan Kumar was attacked by protesters at Nilakkal base camp when he was taking the pictures of women checking the buses for women devotees. 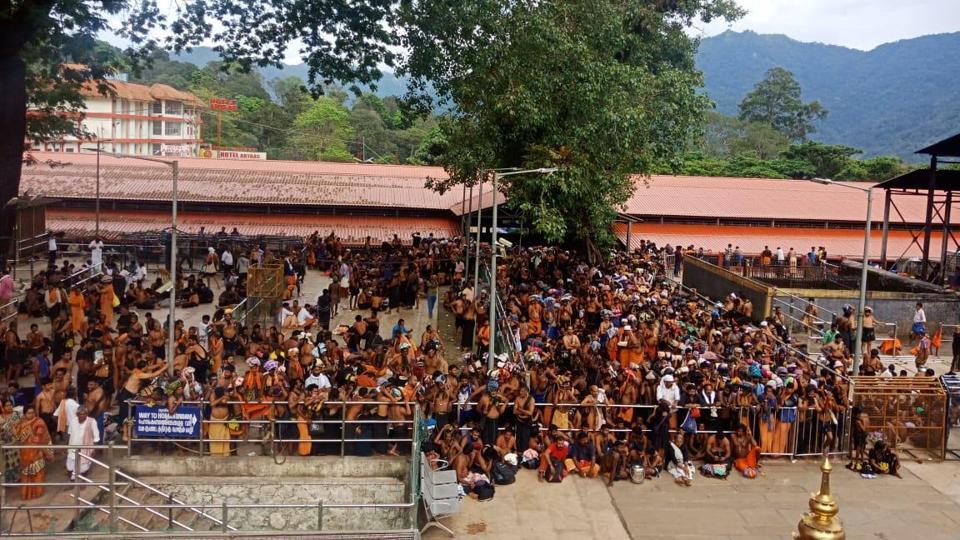 LDF govt is fully responsible for any law and order situation in state. It’s a very unfortunate situation, we aren’t responsible. No BJP worker is involved, we’re condemning that attempt: BJP’s MS Kumar on incidents of violence at Nilakkal base camp.

Police with batons charged a group of more than one hundred protestors trying to prevent women accessing the Sabarimala temple, an AFP reporter at the scene said. Demonstrators threw stones at police.

#WATCH: Police lathi-charge and pelt stones at the protesters gathered at Nilakkal base camp, in Kerala. #SabarimalaTemple pic.twitter.com/DMC1ePz0l2

Meeting underway at NCW office to discuss steps to be taken

The National Commission for Women has taken cognizance of the attack on women journalists in the ongoing protests at Sabarimala. A meeting is underway at NCW office for further steps to be taken.

Scenes of street battle at Nilakkal

Many cops, mediapersons and protesters injured in violence at Nilakkal, the second base camp which is 16 km away from Sabarimala temple

I can predict what is going on there, I think it is intentional,it's dirty politics they (protesters) are playing. We can't say if they are actual devotees. Supreme Court's order is Constitutional & govt is bound to implement it: K K Shailaja, Kerala Minister #SabarimalaTemple pic.twitter.com/f8V73u57Lm

Vehicles damaged in violence at Nilakkal

Violence reported in Nilakkal; many buses and vehicles are said to have been damaged.

Rahul Easwar, grandson of Sabarimala Tantri, who was among those opposing entry of women of menstrual age into Sabarimala, arrested. He is also head of an organisation called Ayyappa Dharma Sena and filed a review petition against the SC verdict on the Sabarimala case.

Armed and masked mobs attack women mediapersons who had gone to cover the protests near Kerala’s Sabarimala temple and vandalize their vehicles. Vehicles and reporters from at least four media organisations targeted - in some cases in presence of the police, the journalists say, reports news channel NDTV.

Minister warns against the ‘wrath of Lord Ayyappa’

Devasom board ex-president among 50 people detained

More than 50 people, including former Travancore Devaswom Board president Prayar Gopalakrishnan, taken into custody in Nilakkal and Pamba for protesting against entry of women into Sabarimala temple.

The Congress leaders hold a peaceful protest in Nilakkal against the entry of women in the age group of 10-50 into SabarimalaTemple.

Temple to be open till October 22

The doors of the temple that open at 5 p.m. today will remain open till October 22. This is the first time the temple would be opening after the Supreme Court order allowing women of all ages to visit the shrine..

40-year-old woman from Andhra sent back by protesters

Protesters force 40-year-old Madhavi and her family from Andhra Pradesh to abandon their trip to the Lord Ayyappa temple. Madhavi, accompanied by her parents and children, began set off for the pilgrimage on the Swami Ayyapan road, but 10 minutes into their trek they had to abandon their plan due to protests. 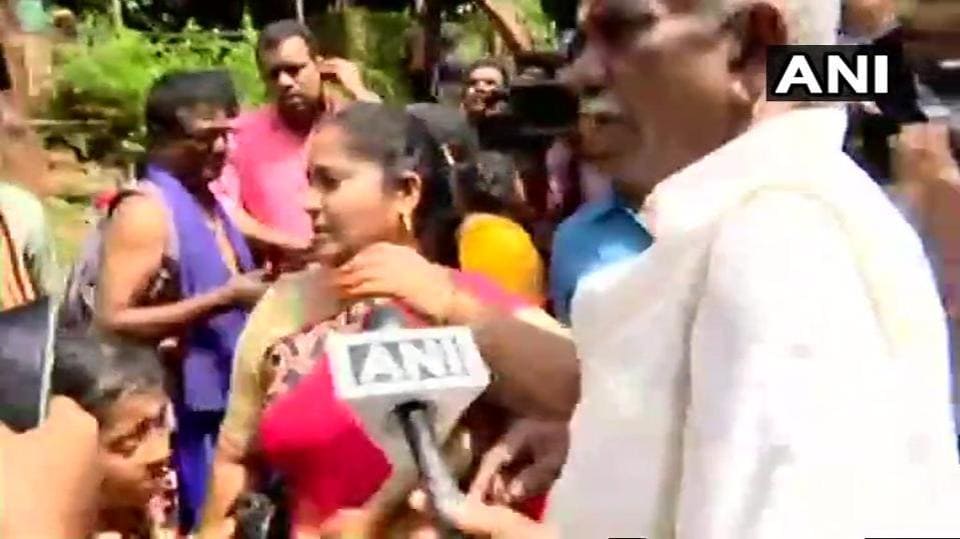 Forty-year-old Madhavi from Andhra Pradesh, on way to Sabarimala temple, was forced to abadon her pilgrimage by protesters. ( ANI photo )
11:49 AM IST

Police detain people in Pamba protesting against the entry of women into Kerala’s Sabarimala temple.

Women protest in Nilakkal against the SC order

#WATCH: Women protest in Nilakkal against the entry of women in the age group of 10-50 to #Sabarimala temple. #Kerala pic.twitter.com/GuxDZo0R7G

No one will be stopped from going to Sabarimala: Police chief

Kerala Police chief Loknath Behra says no one will be stopped from going to Sabarimala. “There is a very strong police presence in and around Sabarimala,” Behra said

Protests at Pamba base camp

Pilgrims begin arriving at the base camp

Pilgrims begin arriving at Nilakkal, the base camp of SabarimalaTemple as the portals of the temple are all set to open today, first time after the SC order allowing women of all ages to enter the temple

Day of bandhs, protests in Kerala

Temple removes board saying ‘women in the age group 10-50 are barred’. It was removed last night.