Home / India News / The lessons to be drawn from Chamoli disaster

The lessons to be drawn from Chamoli disaster

The effects of the climate crisis on Uttarakhand’s weather patterns and their impact on the environment’s capacity to sustain damage being done by the construction of dams makes the state particularly vulnerable.
Share Via
Copy Link
ByAbhishek Jha, Jayashree Nandi, Hindustan Times, New Delhi

Scientists have debated the exact cause of the flash floods that devastated Chamoli district of Uttarakhand on February 7. But there is little doubt that such disasters are likely to become more frequent. This could be because of long-term effects — such as the climate crisis — of human activity as well as more recent developments, such as the construction of dams to generate electricity in the fragile mountain terrain.

The effects of the climate crisis on Uttarakhand’s weather patterns and their impact on the environment’s capacity to sustain damage being done by the construction of dams makes the state particularly vulnerable. These factors definitely pose a threat to Chamoli, according to data on its weather analysed by HT. Here’s how:

A report assessing impact of the climate crisis over the Indian region published by the ministry of earth sciences last year said the Hindu Kush Himalayan (HKH) region has experienced a temperature rise of about 1.3 degrees Celsius from 1951 to 2014. India, as a whole, warmed by only 0.7 degrees from 1901 to 2018, the report said. An analysis of grid-level temperature data set of the India Meteorological Department (IMD) shows that almost all of Uttarakhand – and Chamoli in particular – has experienced the highest increase in both minimum and maximum temperatures. According to the Uttarakhand Action Plan on Climate Change (UAPCC) 2014, these trends in temperature are likely to continue in the future. In the Himalayan region, thermal discomfort to individuals – measured by a temperature-humidity index – is likely to increase in the 2030s. It is likely that this trend in temperatures in Uttarakhand has increased the speed of glaciers melting in the region. Scientists also agree that glaciers in the Himalayas have been retreating faster since the beginning of this century, HT reported on February 8. According to a report of the expert body constituted under the direction of the Supreme Court after the June 2013 Uttarakhand floods, receding glaciers leave behind unstable moraine (rock and sediment deposits left by a glacier at its extremities) dams. When such natural dams breach, they can discharge large volumes of water and debris suddenly, causing floods. 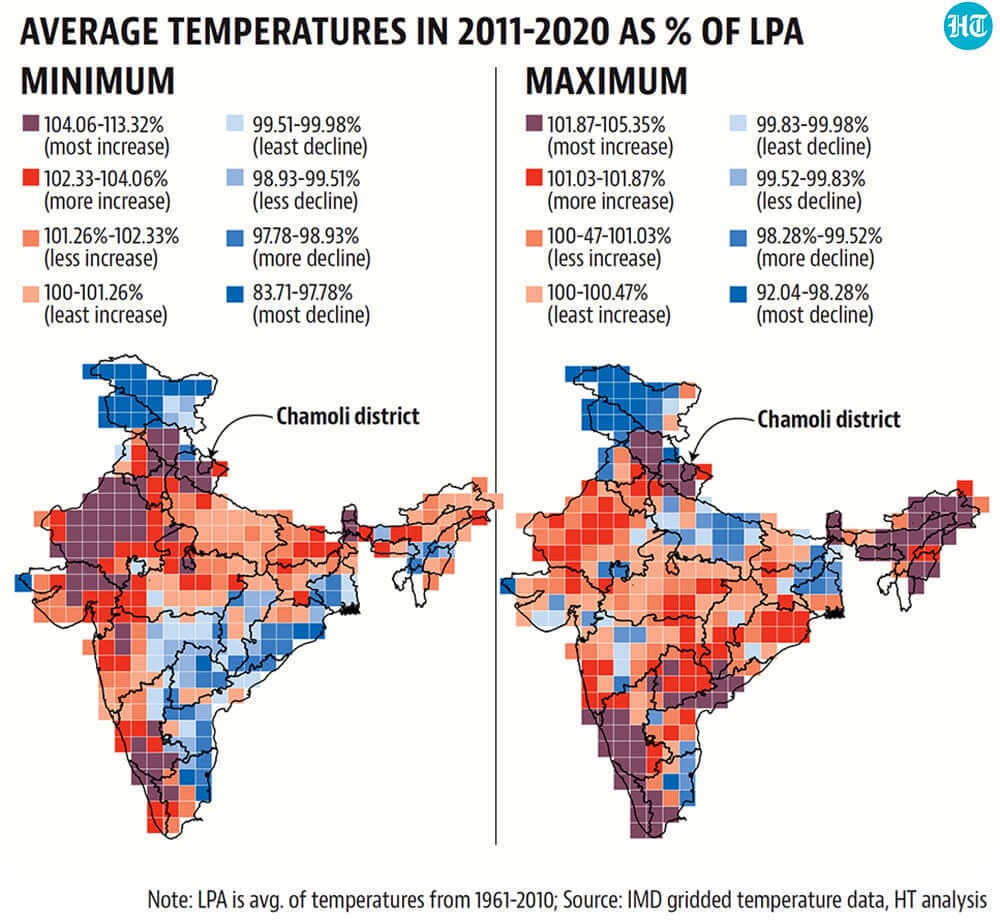 It is not just the rise in temperature that makes Uttarakhand vulnerable to floods. IMD’s gridded rainfall data set also shows that heavy and extreme precipitation (greater than 35.5 mm of rainfall in a day in a grid or box bound by two latitudes and longitudes of 0.25° each) has increased in the state, particularly in the higher regions of the state, including Chamoli. While rainfall of higher intensity itself increases the threat of a flood, in a hilly state such as Uttarakhand, it can be twice as bad as in a state in the plains. Rainwater being warmer than snow and ice can accelerate glacial melting and add to the volume of water flowing in rivers, increasing the threat of a flood. The expert body constituted after the 2013 floods, for example, had this to say about those floods. “The warm rainwater of severe intensity (even upto 30 mm in an hour) in early June caused accelerated snow melt that along with large overland basin runoff from intense rain caused unusual flood havoc in most rivers of Uttarakhand upto Haridwar on the Ganga.” Moreover, according to a research paper by Professor Robert Wasson and others who have analysed large floods in the Upper Ganga catchment, rainfall also triggers landslides in the region. These again lead to natural dams which, when they breach, can amplify the effects of rainfall. Such amplification will only get worse as rainfall gets more intense because of the climate crisis. 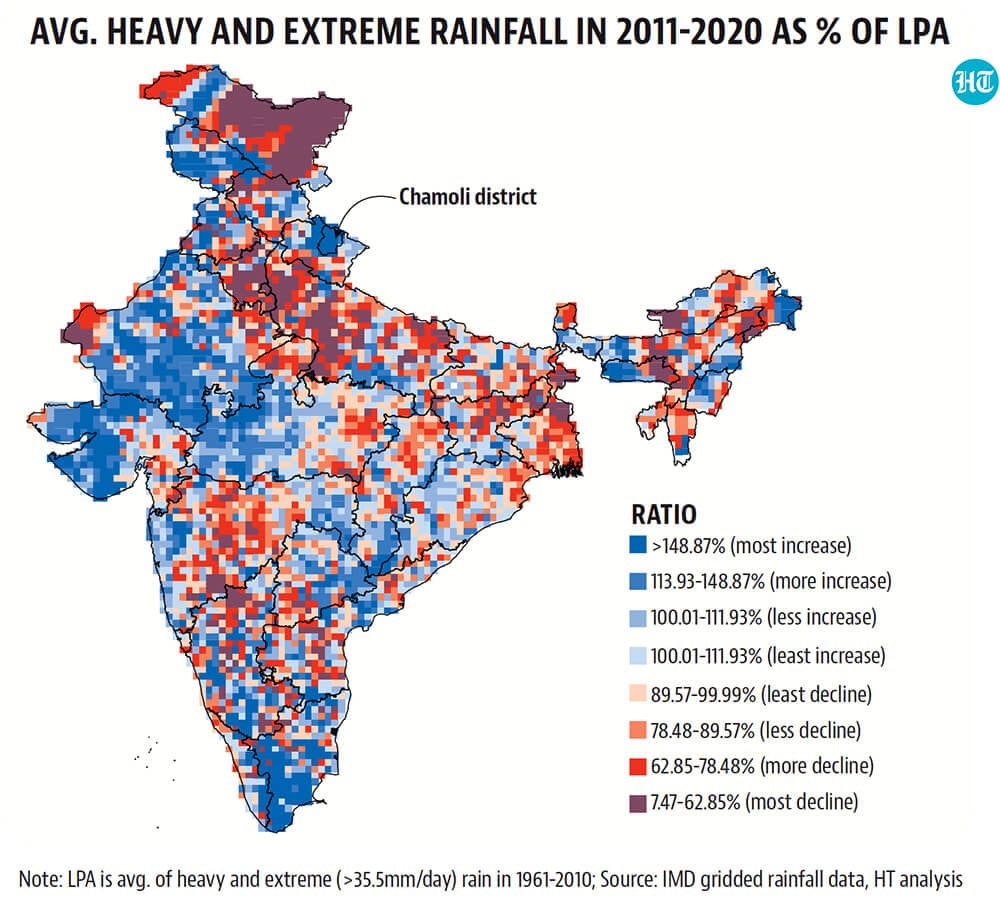 Hydropower projects are one of the cleanest forms of energy, as far as carbon dioxide emissions are concerned. Using them as a source of energy can reduce greenhouse gas emissions, which contribute to global warming and the effects of it discussed above. Still, developers of such projects in Uttarakhand need to take into account the unique environment of the state. According to Navin Juyal, a retired geologist from Ahmedabad’s Physical Research Laboratory, who is studying the Feb 7 glacier breach, policy makers should be extremely cautious about developing hydropower projects in Uttarakhand. This is because Himalayan rivers, being younger, carry many boulders and debris along in the event of a flood. “They are fed by glaciers from where debris flow into the rivers. Big boulders with sand and other debris often get mobilised and hydropower projects create an artificial obstruction in the flow of this material. When these boulders and sand are not able to flow freely, they also form dams holding water behind them. When hydrostatic pressure builds, these dams break and they cause floods,” Juyal said. So how much obstruction are we creating to the natural flow of rivers in Uttarakhand? According to a 2011 report prepared by the Alternate Hydro Energy Centre (AHEC) at the Indian Institute of Technology, Roorkee, for the environment ministry, almost half of the length of rivers in the Bhagirathi and Alaknanda basins is either diverted or submerged because of allotted hydropower projects. This can only worsen any floods in the state. 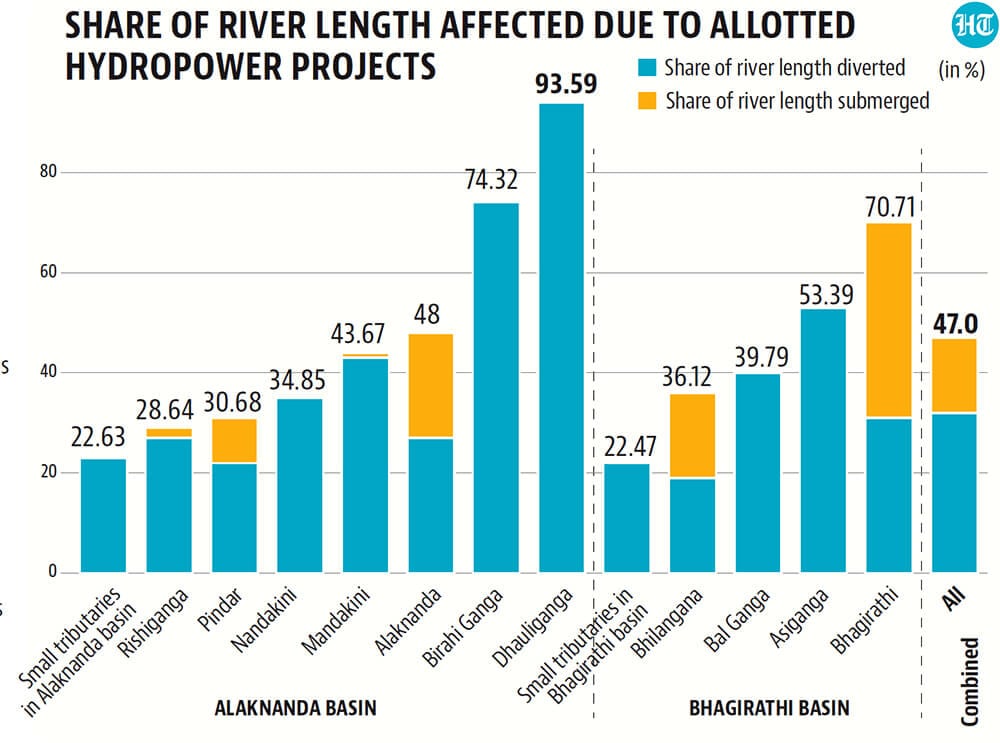 To be sure, there are contrarians. “Entire Rishikesh and Haridwar would have been washed away in the 2013 floods had the flood waters not got stored in Tehri dam after flowing down. I believe that hydroelectric projects are a victim and environmentalists take advantage of disasters to victimise them. There is nothing called higher reached of Himalayas. Hydroelectric projects can be located anywhere after the snowline. The two important factors needed for siting a hydropower project is height and volume of water. You will find height only in the Himalayas. Plus, water storage is extremely important for water security, so we need dams too,” said VK Kanjlia, former secretary of the Central Board of Irrigation & Power.