Why reservation may fail in levelling the field

A Constitution Bench of the Supreme Court has agreed to re-examine the 50% ceiling on reservations in India, which was put in place by the Supreme Court itself in 1992 in the famous Indra Sawhney case. The apex court took this decision while hearing a case on the validity of 10% separate reservations for Marathas in education and employment in government jobs in Maharashtra, something that would have breached the ceiling. Reservations were originally envisaged in the constitution as a temporary provision only for social groups designated as Scheduled Caste (SC) and Scheduled Tribe (ST). Over time they have come to occupy a more prominent role in politics, paved the way for not just evergreening such provisions but also expanding their coverage. From applying to just SC-ST social groups, reservations have expanded to cover OBCs, economically weaker sections of all social groups, who are neither SC-ST nor OBCs, and increasingly, once dominant communities that have now fallen on hard times (such as land-owning communities dependent on agriculture). While the argument in asking for a 50% cap on reservations can be questioned on the basis that merit itself is sometimes the function of privilege, it is clear that reservations are gradually losing their ability to level the playing field. Here are three charts which explain this. 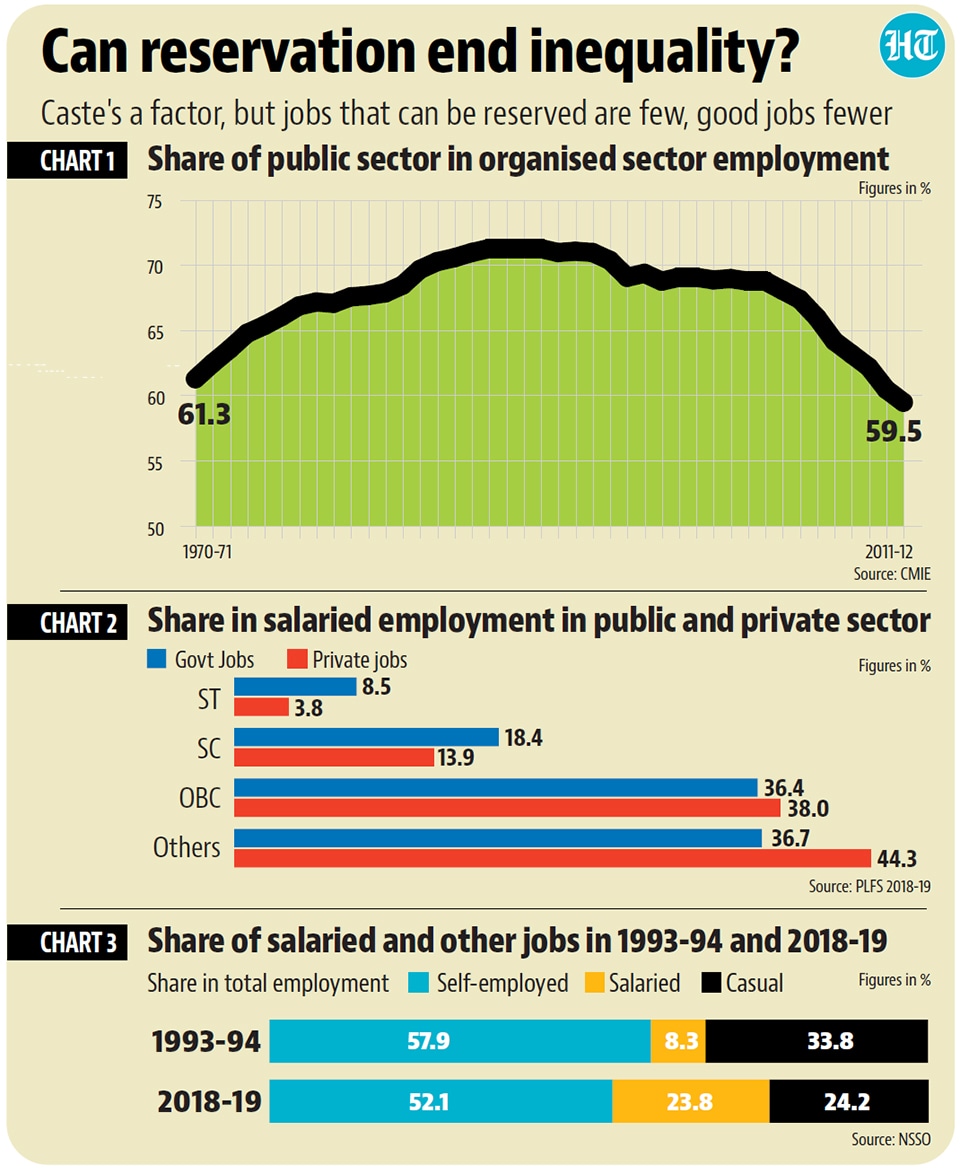 Reservations apply to the public sector, which is losing its importance

While the scope of reservations has gradually increased in India from being for just SC-ST groups to first OBC and now economically weaker sections from other social groups as well, the size of the pie which is covered under reservations has been declining gradually. Data from the Centre for Monitoring Indian Economy’s database shows that the share of public sector; where reservations apply, in organised employment in the country increased until the 1980s and then started declining as public sector started shrinking with the opening up of the economy. In 2011-12, the latest period for which data is available, public sector accounted for less than 60% of total organised sector jobs in the country. This includes government jobs. (Chart 1)

An analysis of unit level data from the latest Periodic Labour Force Survey (PLFS), India’s official source of employment statistics, shows that caste-wise inequality in salaried jobs (they are the highest paying jobs in India) is greater in private sector than in public sector. The former does not have reservations, while the latter has. A 2007 Economic and Political Weekly (EPW) paper by SK Thorat and Paul Attewell was based on an experiment where identical job applications were sent by candidates with names which suggested that they were upper caste, Dalits (SC) and Muslims. The authors found that companies discriminated against candidates with SC and Muslim surnames even in terms of contacting candidates. But reservations may not be the answer. (Chart 2)

Expanding reservations to private sector will not solve inequality problem

The declining share of India’s public sector employment should be read in consonance with the fact that the total number of organised sector jobs in 2011-12 was just 29.6 million, whereas the size of India’s labour force was 430 million. This statistic is the most telling reminder that even if reservations were to be expanded to the private sector, it cannot achieve much in equalizing access to quality jobs, even if the social unrest which the policy would cause, were to be set aside for a moment. A comparison of the share of salaried jobs in India during the post-reform period captures this point. The solution lies in increasing the size of the pie, not play around with the allocation of the slices.(Chart 3)