Delhi airport likely to have fourth runway operational by September

Thereafter, the strip will undergo a certification by the Directorate General of Civil Aviation and if all goes as planned, will be made operational, latest by September, the officials said.
READ FULL STORY
By Anvit Srivastava, Hindustan Times, New Delhi

Delhi’s Indira Gandhi International airport is likely to throw open its fourth runway for operations September this year, officials said, adding that construction work was nearing completion and the operator was looking to wrap up work and hand it over to the air traffic control by July.

Thereafter, the strip will undergo a certification by the Directorate General of Civil Aviation and if all goes as planned, will be made operational, latest by September, the officials said.

Once operational, the fourth runway will not only increase the per hour flight handling capacity of the Delhi airport, but will also cut down the waiting time for approaching and departing flights, the officials said. 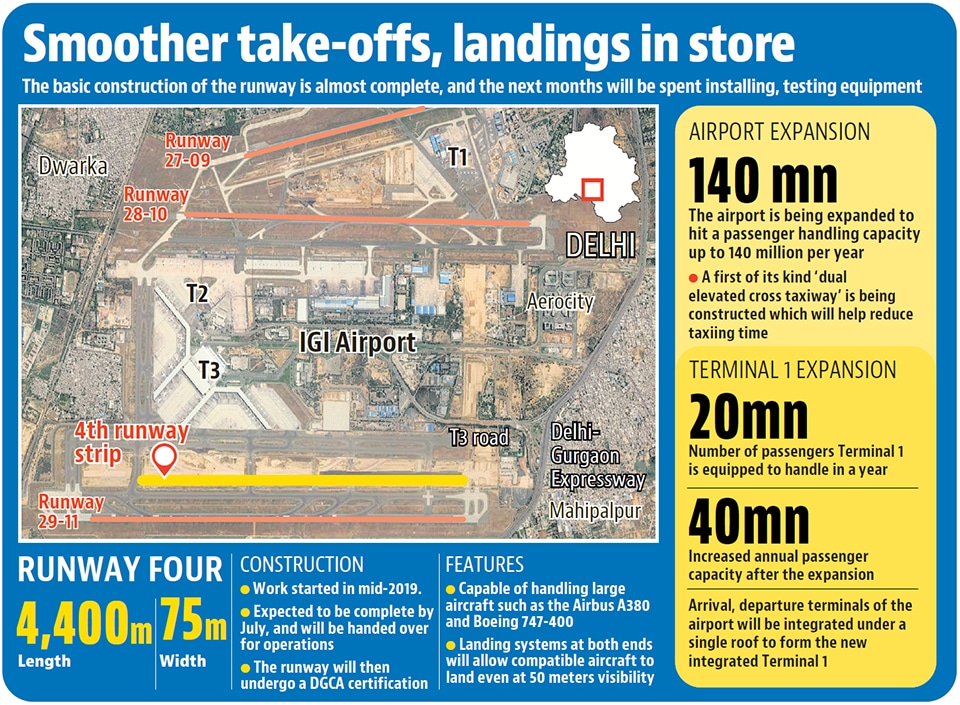 The new runway will be equipped with advanced landing systems allowing flight operations in visibility as low as 50 metres. The strip will be capable of catering to the biggest passenger aircraft, the Airbus A380, they said.

Officials in the know of the development said that the basic structural construction work of the runway is almost complete and that the next few months will be spent installing equipment, testing them and in construction of other required structures near the strip.

A senior officer in the ministry of civil aviation, who is aware of the development said that the runway is being built between the existing Terminal 3 and runway 29/11, which at present is the longest runway in India.

“The construction work of the fourth runway had started in 2019 and is in full swing. It is likely to be completed by July. As per the plan, the airport operator DIAL (Delhi International Airport Ltd) will hand over the air strip to its air side team and to the Delhi air traffic control in July, after which the runway will be audited by the DGCA. After due certifications and approvals, if all goes well, it is likely to be made operational by September,” the officer said.

The airport operator, DIAL, declined to comment on the development.

Another officer from the Delhi airport said that the construction work of the fourth runway was impacted and had to be stopped briefly in 2020 because of the raging Covid-19 pandemic. “The airport has managed to make up for lost time and will hopefully deliver the runway on time,” the officer said, requesting anonymity.

The officer said that the length of the fourth runway is 4,400 metres, a little less than the existing third runway 29/11 (4,430 metres). “Delhi will have both the longest and the second longest runway in the country. Total width of the runway will be 75 metres, making it capable of handling new generation large aircraft, such as the Airbus A380 and Boeing 747-400,” the officer said.

The fourth runway will also have instrument landing systems at both its ends to allow compatible aircraft to land even when the visibility is as low as 50 metres during dense fog. “This will also make Delhi airport the only one in the country to have three runways with advanced landing system,” the officer added.

Talking about how the fourth runway will enhance the flight operations capacity of the airport, an official from the Delhi air traffic control said, once in use, runway 29/11 and the new runway will be used, parallelly, for arrivals and departures.

“This will take the per hour capacity of Delhi airport from 75-80 flights to 105-110 flights, thereby reducing the congestion over Delhi’s airspace. At present aircraft are forced to hover and wait in queue before landing. The fourth runway will help save time making air operations smoother,” the ATC official said.

Delhi airport at present is undergoing expansion to attain a passenger handling capacity of up to 140 million per year. The current capacity of the airport is of around 100 million passengers.

As planned, apart from the fourth runway, the revamped airport will have a first of its kind ‘dual elevated cross taxiway’ which would help in reducing the taxiing time of aircraft. Terminal 1, which is at present closed for operations, is also being expanded and its total area will increase taking its passenger handling capacity from 20 million passengers per year to 40 million.

As per the plan, the arrival and departure terminals of the airport will be integrated under a single roof to form the new integrated Terminal 1. The international transfer area of Terminal 3 will also be increased, and a 7th check-in island will be added in T3 with a connected baggage handling stems and two arrival carousels.

The ongoing expansion will also impact the city side as the Central Spine Road (the main approach road to the T3) is being widened from 8 lanes to 12 lanes to cater to the expected increase in traffic. Once T1 is completed, additional lanes will be added to the departure ramp of T1 to improve traffic circulation and a dedicated corridor for cargo movement in and out of the airport, with a flyover close to NH8, will also be constructed to segregate the heavy vehicle movement from passenger vehicles.

Martin said even though landing on 29/11 is not a challenge task but having a displaced thresh hold because of the obstacles, it can be a challenge specially during bad weather.