The IPCC report titled ‘Climate Change 2021: The Physical Science Basis’ released on Monday said heatwaves and humid heat stress will be more intense and frequent during the 21st century over South Asia

Glacial retreat in the Hindu Kush Himalayas; compounding effects of sea-level rise and intense tropical cyclones leading to flooding; an erratic monsoon; and intense heat stress are likely to impact India in recent years, the Intergovernmental Panel on Climate Change (IPCC) has indicated.

Most of these impacts are irreversible and hence cannot be remediated even if greenhouse gas emissions decline dramatically, the IPCC said.

The IPCC report titled ‘Climate Change 2021: The Physical Science Basis’ released on Monday said heatwaves and humid heat stress will be more intense and frequent during the 21st century over South Asia.

Glacial retreat in the Hindu Kush Himalayas; compounding effects of sea-level rise and intense tropical cyclones leading to flooding; an erratic monsoon; and intense heat stress are likely to impact India in recent years, the Intergovernmental Panel on Climate Change (IPCC) has indicated.

Most of these impacts are irreversible and hence cannot be remediated even if greenhouse gas emissions decline dramatically, the IPCC said.

The IPCC report titled ‘Climate Change 2021: The Physical Science Basis’ released on Monday said heatwaves and humid heat stress will be more intense and frequent during the 21st century over South Asia.

The Indian Ocean, which includes the Arabian Sea and Bay of Bengal, has warmed faster than the global average, the IPCC said with “very high confidence”. The oceans factsheet released by IPCC on Monday indicates that sea surface temperature over Indian ocean is likely to increase by 1 to 2 degrees C (°C) when there is 1.5°C to 2°C global warming.

Over high mountains in Asia which include the Himalayas, snow cover has reduced since the early 21st century, and glaciers have thinned, retreated, and lost mass since the 1970s, the IPCC said, although the Karakoram glaciers haven’t recorded any major retreating trend.

Snow-covered areas and snow volumes will continue to decrease during the 21st century, snowline elevations will rise and glacier mass is likely to decline further as emissions rise. Rising global temperature and rain can increase the occurrence of glacial lake outburst floods (GLOFs) and landslides over moraine-dammed lakes, the IPCC warned.

India has recently suffered a spate of flooding and landslide disasters in high mountains of Uttarakhand and Himachal Pradesh. A glacier breach on February 7 in Uttarakhand triggered flash floods in the Rishiganga and Dhauliganga valleys, sweeping away the Rishiganga hydel project and National Thermal Power Corporation’s Tapovan Vishnugad project. The disaster is feared to have killed over 200 people. 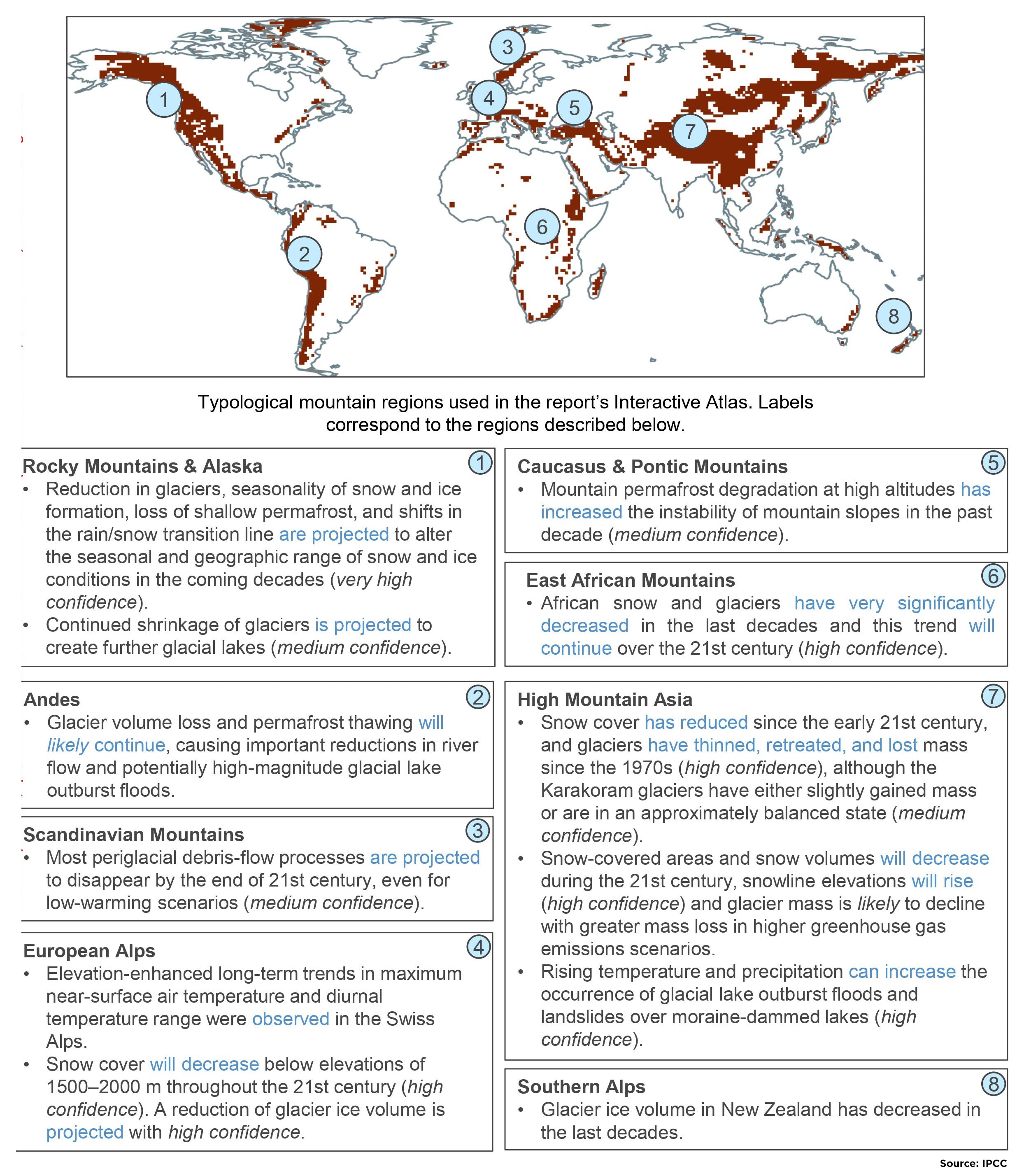 Heat extremes have increased while cold extremes have decreased, and these trends will continue over the coming decades over Asia. This the first time IPCC has released regional factsheets. The Asia projection maps indicate annual mean temperatures will increase by 1-2°C relative to 1850-1900 period in case of 1.5°C to 2°C global warming. There are likely to be 90 to 120 days in a year with maximum temperatures above 35°C in case of 1.5 to 2°C warming and over 180 days in case of 4°C warming.

Marine heatwaves will continue to increase. Fire weather seasons will lengthen and intensify, particularly in North Asia regions. Mean surface wind speeds have decreased and will continue to decrease in central and northern parts of Asia.

Glacier run-off in the Asian high mountains will increase up to mid-21st century and subsequently, it may decrease due to the loss of glacier storage, the report said. Sea level around Asia in the North Indian Ocean has increased faster than global average, with coastal area loss and shoreline retreat. Regional-mean sea level will continue to rise, the IPCC has said with “high confidence”. “About 50% of the sea level rise is due to the thermal expansion. Also, Indian Ocean region is warming at a higher rate that means the relative sea level can also increase over the regions. Hence, the coastal regions will see the sea level rise through the 21st century, and it will contribute to more frequent and severe coastal flooding in low level areas and coastal erosion. Along with this, extreme sea level events that were previously seen once in a hundred years, could also happen every year by the end of the century,” said Swapna Panickal, IPCC author and climate scientist from Indian Institute of Tropical Meteorology.

As far as monsoon is concerned, it has weakened in the second half of the 20th century mainly due to aerosols from human activity. Atmospheric aerosols are suspended liquid, solid, or mixed particles with highly variable chemical composition and size distribution. They are pollution particles which scatter solar radiation, and a few aerosol types can also absorb solar radiation thus having a cooling effect.

Though in the near term—next 20 years South and Southeast Asian monsoon and East Asian summer monsoon rain will be dominated by the effects of aerosols and internal variability, in the long-term, monsoon rain is likely to increase.

At 1.5°C global warming, heavy precipitation and associated flooding are projected to intensify and be more frequent in most regions in Africa and Asia, the report said adding that they have “high confidence” in the projection.

There is strengthened evidence since IPCC’s fifth assessment report released in 2014 that the global water cycle will continue to intensify as global temperatures rise, with rainfall and surface water flows projected to become more variable and unpredictable within seasons.

At the global scale, extreme daily rainfall events are projected to intensify by about 7% for each 1°C of global warming. Extreme rainfall events are defined as the daily precipitation amount over land that was exceeded on average once in a decade during the 1850–1900 reference period.

“A warmer climate will intensify very wet and very dry weather and climate events and seasons, with implications for flooding or drought, but the location and frequency of these events depend on projected changes in regional atmospheric circulation, including monsoons and mid-latitude storm tracks,” the report said.

Rainfall variability related to the El Niño–Southern Oscillation is projected to be amplified by the second half of the 21st century, it added.

Many regions are projected to experience an increase in the probability of compound events (i.e different types of extreme events happening at the same time or one after the other). This can be particularly alarming for India, experts pointed.

“2°C global warming has serious implications due to possible increases in extreme weather events like heat waves, heavy precipitation, intensification of tropical cyclones etc. Also, the variability of climate will increase suggesting more drought episodes where drying is happening and floods where wetting is happening. Dry becomes drier and wet becomes wetter. Another worrying fact is that we should expect compounding extreme weather events. For example, drought followed by heat waves. A flood followed by another flood. We have not documented this aspect very well. I have reviewed a few research papers recently for some leading journals on this emerging area,” said M Rajeevan, former secretary, ministry of earth sciences.

Some climate impacts in India are irreversible:

The IPCC report has also flagged that the climate crisis has caused certain impacts globally which are irreversible and continue to affect us in future. Greenhouse gas emissions since 1750 have committed the global ocean to future warming, it said adding that based on multiple lines of evidence, upper ocean stratification (vertical changes in sea water density), ocean acidification (decrease in ph value of oceans) and ocean deoxygenation (low oxygen zones in the oceans) will continue to increase in the 21st century. The rate at which these intensify will depend on emission trends.

Mountain and polar glaciers will continue melting for decades or centuries, the IPCC said, implying that Himalayas in India and neighbouring countries could be facing irreversible changes. Continued ice loss over the 21st century is virtually certain for the Greenland Ice Sheet and for the Antarctic Ice Sheet

“Some of the changes are locked in— these include increase in sea level rise, melting of glaciers and thawing of permafrost. We will see impacts of current warming in the coming decades. We will see extreme events that our current warming has locked in. In India, the increase in heat waves is masked by aerosol emissions, if these emissions are cut down, further increases in heat waves are likely. Very strong increase in heat waves, heavy rainfall events, further melting of glaciers can be expected and are very important for India. Sea level rise will cause flooding when tropical cyclones hit. These impacts are here and will not go away,” said Friederike Otto, Associate Director, Environment Change Institute, University of Oxford during a media briefing on Sunday.

• Climate change is intensifying the water cycle. This brings more intense rainfall and associated flooding, as well as more intense drought in many regions.

• It is affecting rainfall patterns. In high latitudes, rainfall is likely to increase, while it is projected to decrease over large parts of the subtropics.

• Changes to monsoon rain are expected, which will vary by region.

• Extreme sea level events that previously occurred once in 100 years could happen every year by the end of this century.

• Further warming will amplify permafrost thawing, and the loss of seasonal snow cover, melting of glaciers and ice sheets.

• Changes to the ocean, including warming, more frequent marine heatwaves, ocean acidification, and reduced oxygen levels have been clearly linked to human influence.

• These changes affect both ocean ecosystems and the people that rely on them, and they will continue throughout at least the rest of this century.

• For cities, some aspects of climate change may be amplified, including heat (since urban areas are usually warmer than their surroundings), flooding from heavy precipitation events and sea level rise in coastal cities.

How do we know climate change is due to human influence?

The current rates of increase of the concentration of the major greenhouse gases (carbon dioxide, methane and nitrous oxide) are unprecedented over at least the last 800,000 years. Several lines of evidence clearly show that these increases are the results of human activities. The basic physics underlying the warming effect of greenhouse gases on the climate has been understood for more than a century, and our current understanding has been used to develop the latest generation climate models. Like weather forecasting models, climate models represent the state of the atmosphere on a grid and simulate its evolution over time based on physical principles. They include a representation of the ocean, sea ice and the main processes important in driving climate and climate change. Results consistently show that such climate models can only reproduce the observed warming when including the effects of human activities in particular the increasing concentrations of greenhouse gases.