Prime Minister Narendra Modi, in his first Independence Day speech after returning to power, said his government has achieved many firsts in the last 10 weeks. The PM said Indians are no longer satisfied with incremental progress and are looking at long-term gains. “India does not want incremental progress. A high jump is needed, our thought process has to be expanded. We have to keep in mind global best practices and build good systems,” Modi said.He also took a swipe at the opposition for targeting the government of the repeal of Article 370 in Jammu and Kashmir. PM Modi asked the opposition why Article 370 wasn’t made permanent if it was so “important and life changing”.This is PM Modi’s first Independence Day speech after the he led the NDA to a massive victory in the Lok Sabha elections to retain power for a second consecutive term. His speech on Thursday saw him equal former BJP Prime Minister Atal Behari Vajpayee’s record of six I-Day speeches.Highlights: 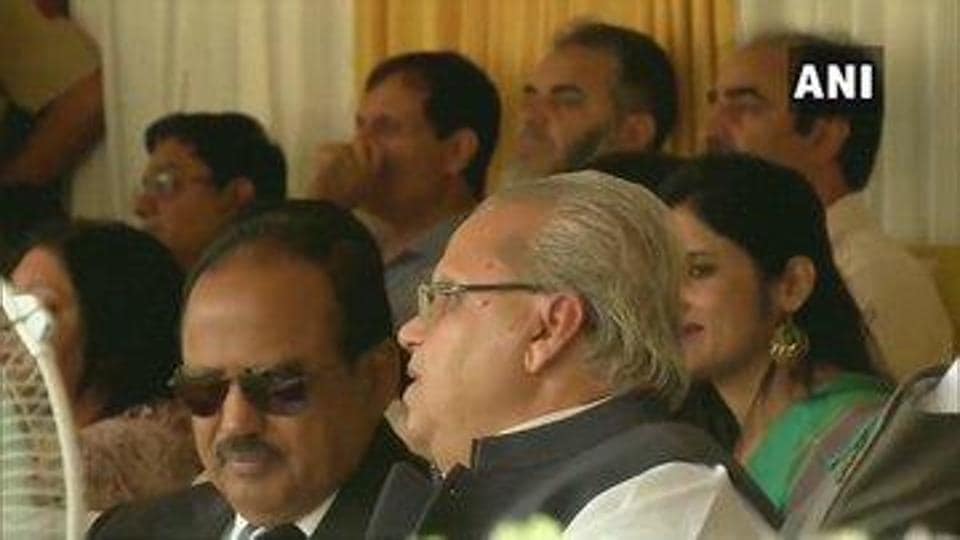 President of Russia, Vladimir Putin has written to Prime Minister Narendra Modi and President Ram Nath Kovind on the 73rd IndependenceDay. The letter states, “kindly accept cordial congratulations on the national day of the Republic of India, the Independence Day”, news agency ANI reported souring the information from Russian embassy.

“This Independence Day is very special for the entire country, there is also the additional significance of securing Union Territory (UT) status. I’m happy to be a part of the celebrations of the first Independence Day of the UT of Ladakh,” said BJP’s Ram Madhav in Leh.

I assure J-K people that their identity not on line: Satya Pal Malik

“I assure the people of Jammu & Kashmir that their identity is not on the line, it hasn’t been tampered with. The constitution of India allows different regional identities to flourish,” said Governor Satya Pal Malik, reported by news agency ANI

He said that the changes that the Central Government has brought are not only historic but also open a new door for the development of the people of Jammu-Kashmir, & Ladakh.

“Complete independence will be complete only to the extent of our approach in practice to truth and nonviolence.”

My best wishes to all of you on this our 73rd Independence Day, Congress leader Rahul Gandhi tweeted.

Interim Congress chief hoisted the tricolour at the Congress party office in Delhi. 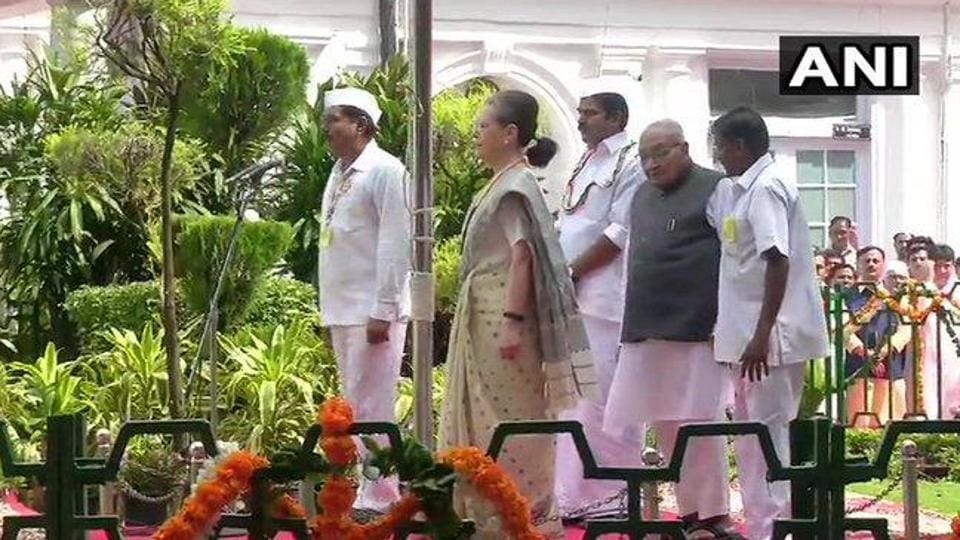 The Indo-Tibetan Border Police (ITBP) personnel hoisted the tricolour on the occasion of 73rd India Independence Day at OP Dorjila Post (altitude of 18,800 feet) in Sikkim. 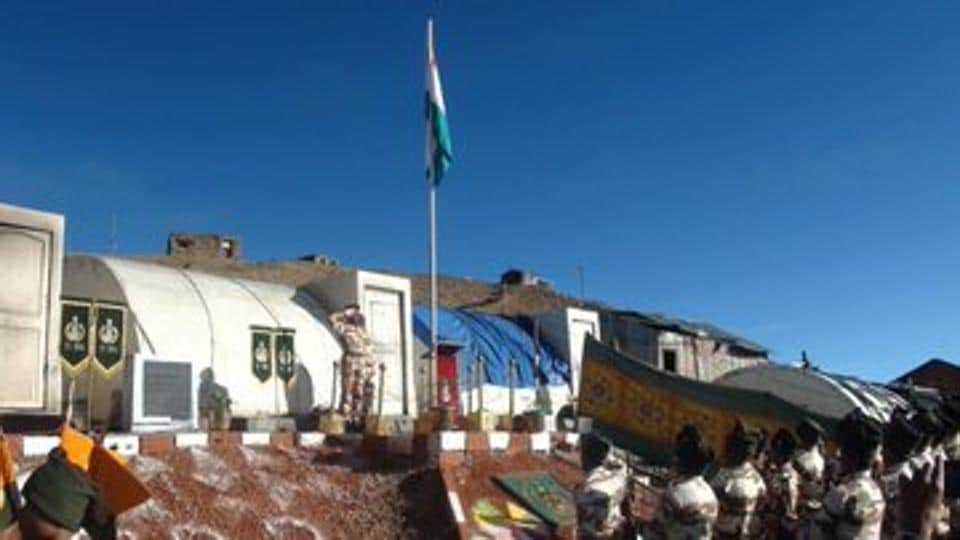 Harshpal Singh, Second-in-Command has been awarded the Kirti Chakra for displaying exemplary bravery and raw courage in an operation in which 3 JeM foreign terrorists were neutralised in Jamu and Kashmir, where despite suffering bullet and grenade blast injury he kept fighting, the CRPF said as reported by news agency ANI.

“I am elated. I am also feeling good for my Battalion, my organisation. I would like to thank all who supported me (at the time of operation) and stood by me after agreeing with my decision,” Harshpal Singh said on being awarded the Kirti Chakra .

Home Minister Amit Shah today hoisted the tricolour at his residence in Delhi. 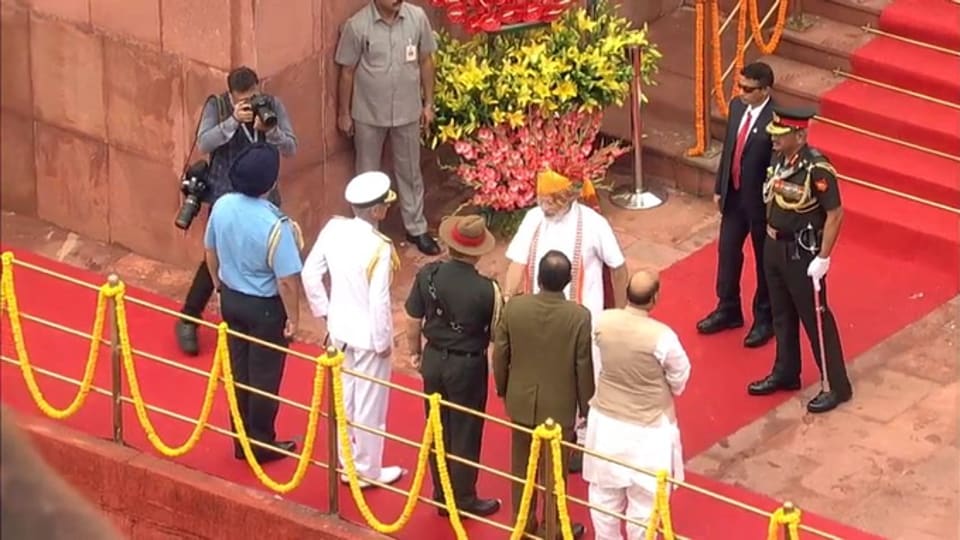 After his address to the nation, Prime Minister Narendra Modi met children at the Red Fort on the occasion of 73rd Independence Day. 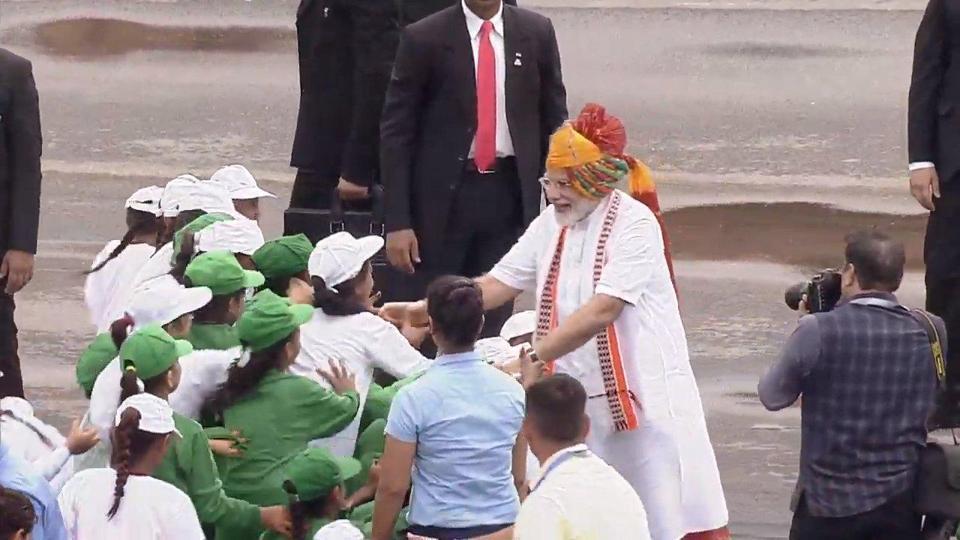 Chandrayaan is going to places where no other satellites have gone, said PM Modi.

Let us further the use of digital payments: PM Modi

Can we make this our motto.

Let us further the use of digital payments all over the nation: PM @narendramodi

PM Narendra Modi said that India has much to offer.

“I know people travel abroad for holidays but can we think of visiting at least 15 tourist destinations across India before 2022, when we mark 75 years of freedom,” he said.

Our priority should be a ‘Made in India’ product: PM

Our priority should be a 'Made in India' product.

Can we think of consuming local products, improving rural economy and the MSME sector: PM @narendramodi

Can we free India from single use plastic? The time for implementing such an idea has come. May teams be mobilised to work in this direction. Let a significant step be made on 2nd October: PM

India will soon have a Chief of Defence Staff: PM Modi

Our forces are India’s pride. To further sharpen coordination between the forces, I want to announce a major decision from the Red Fort:

India will have a Chief of Defence Staff- CDS. This is going to make the forces even more effective, the Prime Minister said.

“From the ramparts of the Red Fort, I give my greetings to the people of Afghanistan who are marking 100 years of freedom,” said PM Narendra Modi in his Independence Day speech.

“Wealth creation is a great national service. Let us never see wealth creators with suspicion.Only when wealth is created, wealth will be distributed.

Wealth creation is absolutely essential. Those who create wealth are India’s wealth and we respect them,” PM Modi.

Fundamentals of our economy are strong: PM Modi

“Today, the Government in India is stable, policy regime is predictable...the world is eager to explore trade with India. We are working to keep prices under check and increase development.

The fundamentals of our economy are strong,” the Prime Minister said in his I-Day speech.

Time has come to think about how we can boost exports. Each district of India has so much to offer.

“People’s thinking has changed. Earlier, people were happy with merely a plan to make a railway station.Now people ask- when will Vande Bharat Express come to my area.

People do not want only good railway stations or bus stations, they ask- when is a good airport coming,” said PM Modi.

“Earlier the aspiration was to have a good mobile phone but now, people aspire better data speed. Times are changing and we have to accept that”, he added.

“India does not want incremental progress. A high jump is needed, our thought process has to be expanded. We have to keep in mind global best practices and build good systems: PM

Let our people have freedom of pursuing their aspirations: PM

I always ask- can we not remove the excess influence of Governments on people’s lives. Let our people have the freedom of pursuing their own aspirations, let the right eco-system be made in this regard: PM

Every effort made to remove corruption and black money is welcome. These are menaces that have ruined India for 70 long years. Let us always reward honesty: PM @narendramodi

Every govt has worked for welfare of people: PM Modi

The Prime Minister said that in the last 70 years, every Government at the Centre and the various States, irrespective of which party they belonged to, have worked for the welfare of the people.

People from all walks of life need to focus on water conservation: PM

The movement towards water conservation has to take place at the grassroots level. It cannot become a mere Government programme. People from all walks of life have to be integrated in this movement: PM

“It is unfortunate, however, that so many people lack access to water even 70 years after Independence.

Work on the Jal Jeevan Mission will progress with great vigour in the years to come,” PM Narendra Modi assured.

Spirit of one nation, one Constitution a reality: PM

“One Nation, One Constitution- this spirit has become a reality and India is proud of that,” the Prime Minister said.

“The old arrangement in Jammu, Kashmir and Ladakh encouraged corruption, nepotism but there was injustice when it came to rights of women, children, Dalits, tribal communities. The dreams of sanitation workers were incomplete. How can we accept such a situation,” said PM Modi in his address.

“If the Article 370, as the opposition says, was so necessary why did they not make it permanent, why did it always remain provisional. It’s because they didn’t have the courage to come forward and take a bold move,” said PM Modi in his Independence speech.

“We neither delay solutions to problems nor do we keep them festering. Our government took the decision to revoke Article 370, which couldn’t be taken in the past 70 years,” PM Modi said in his Independence day speech.

Before 2014 elections people questioned if the country can change: PM

“Before the elections in 2013-2014 I went all over the country in order to try to understand the feelings of the people. There was disappointment on everyone’s face, people used to think can this country change?,” PM Min I-Day speech.

“The fear of triple talaq keeps haunting Muslim women in our country, which is why we took the step ti criminalise instant talaq,” PM Modi said in his Independence speech.

Today as we are marking Independence Day, many of our citizens are suffering due to floods in various parts of the country. We stand in solidarity with those affected by the floods: PM Modi

“The country fully understands the importance of water conservation and that is why a ministry for Jal Shakti has been formed. Steps have been taken to make the medical sector even more people friendly,” PM Narendra Modi said.

“Within 10 weeks of the new government, we took major steps for the welfare of the nation,” said PM Modi in his address. The Prime Minister then listed the government’s move to criminalise triple talaq, move to revoke 35A and the welfare schemes for farmers.

PM Modi began addressing the nation on the 73rd Independence Day. The Prime Minister extended greetings for the festival of Raksha Bandhan and also expressed his concern for the people in flood-affected areas of the country.

PM Narendra Modi hoisted the tricolor at the Red Fort.

Delhi: Prime Minister Narendra Modi inspects the Guard of Honour at the Red Fort. He will address the nation shortly. #IndependenceDayIndia pic.twitter.com/T7T6XJs2R2

Visitors, performers and jawans gather at the Red Fort ahead of Independence Day celebrations

Delhi: Visitors, performers and jawans gather at the Red Fort ahead of Independence Day celebrations. Prime Minister Narendra Modi will address the nation shortly, from here.

Delhi: Visitors, performers and jawans gather at the Red Fort ahead of #IndependenceDay celebrations. Prime Minister Narendra Modi will address the nation shortly, from here. pic.twitter.com/qQvu7mpreP

Security and preparation for Independence day celebration at Red Fort

Security and preparation for Independence day celebration at Red Fort. 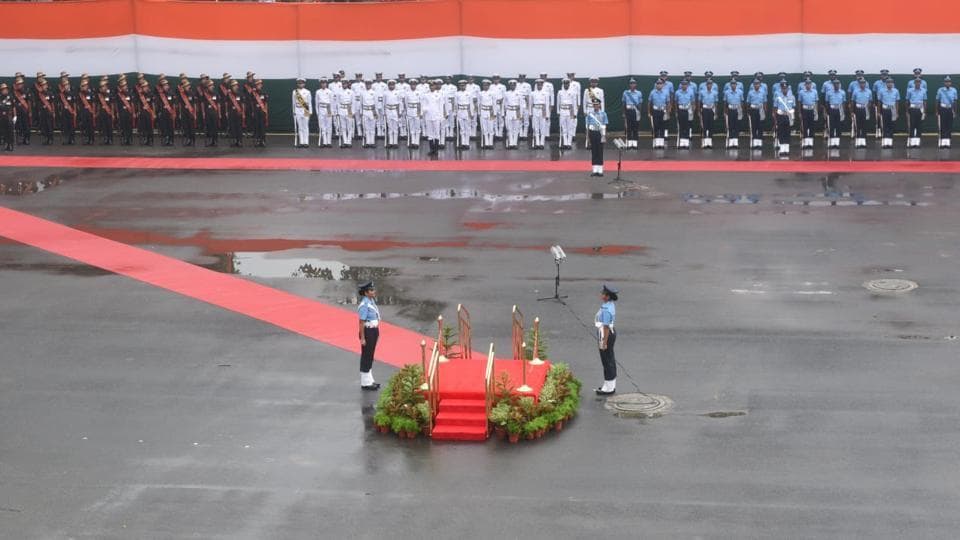 Defence Minister Rajnath Singh hoists the tricolour at his residence

Where to watch streaming of Independence Day parade

You can watch the full parade and Prime Minister Modi’s speech live on Doordarshan’s YouTube channel from 6:25am.

You can also watch the Independence Day speech on the webcast services of the National Informatics Centre here.

The Prime Minister’s I-Day speech will also be available on his website narendramodi.in.

This will be PM Modi’s first Independence Day address to the nation after his party returned to power for a second term with a majority in the April-May Lok Sabha elections.

PM Modi will pay tributes to Mahatma Gandhi at Rajghat at 7 am. At 7.30 am, the prime minister’s address to the nation from the ramparts of the Red Fort will begin.

The nation will celebrate its 73rd Independence Day today. On this day in 1947, India got independence from the British rule.