“The biggest challenge is to develop trust among people, as they voted for my party and not for me. With my work, I have to create a special space in their hearts, and to make the Opposition realise that there is no term like Hindu terrorist or terrorism,” said Thakur.
READ FULL STORY
Bhopal | By Shruti Tomar

Pragya Thakur’s day begins early. Yoga is followed by meditation and a two-hour puja in her home temple. Then she switches into “MP mode”. At 9.30am, the 49-year-old newly elected Member of Parliament from Bhopal descends to her living room with the help of an assistant to meet people. At her “janta durbar”, most of them sit on the carpet in the spacious hall and some in the chairs arranged in a circle around Thakur’s special recliner. She greets them with chants of “Bharat Mata Ki Jai” and “Vande Matram”. They repeat after her.

Each of them has something to say to her. On June 12, Thakur asked an old lady to speak first. Vimla, 62, began to weep. She said she was being harassed by her landlord to pay an outstanding rent of ~16,000. She said she lived with her son who spent most of his money on alcohol. She complained he didn’t care about his parents but his wife and kids. Thakur listened quietly before launching into a sermon: “I understand your problem but, Amma, you are obsessed with ‘putra moh’ [love of son]. You have to show him the right path. He has to pay the rent.” Thakur asked her older sister, Upma Singh, who lives with her, to note down the number of the woman’s sons and call them in for counselling. Vimla touched Thakur’s face in blessing and left the hall.

Thakur has a lifetime’s reputation for saying it as she sees it. “She had the image of ‘dabbang didi’ during her youth. Whether riding a motorcycle or beating up stalkers, Didi always believed in empowerment of women both physically and mentally,” said her associate Pushya Mitra from Bhind, who says she has known Thakur for 40 years.

Thakur was born in Bhind district, 502km north of Bhopal, in 1970. She was one of four daughters and a son. Her father, an ayurveda practitioner and an active member of the Rashtriya Swayamsevak Sangh, died in 2012. Her 75-year-old mother lives with her in Bhopal. Thakur attended a government school in Lahar and later studied at a local college and then a university in Bhopal. She began her political career as a member of the Akhil Bharatiya Vidyarthi Parishad (ABVP), the RSS’s student wing. In 1998, she became a holy woman, accepting the title “Sadhvi” from a seer.

In 2008, bombs went off near a mosque in Malegaon, a town in northern Maharashtra, killing six people and injuring over a hundred. Later that year, Maharashtra’s anti-terror squad (ATS) charged Thakur with aiding the attack. The motorbike to which the explosives were strapped was registered in Thakur’s name. The ATS also accused her of attending a meeting organised to plot the attack. She was arrested in October 2008 and released on bail in 2017, after some witnesses turned hostile. Thakur also previously faced charges in the murder of former RSS pracharak Sunil Joshi in Madhya Pradesh in 2007. She was acquitted in February 2017 for lack of evidence.

This April, the Bharatiya Janata Party (BJP) declared Thakur as its candidate from Bhopal. She was up against former chief minister Digvijaya Singh. Prime Minister Narendra Modi described the party’s Lok Sabha candidate as a symbolic answer to “all those who labelled the rich Hindu civilisation as terrorist”. Thakur termed the fight a “religious battle.” 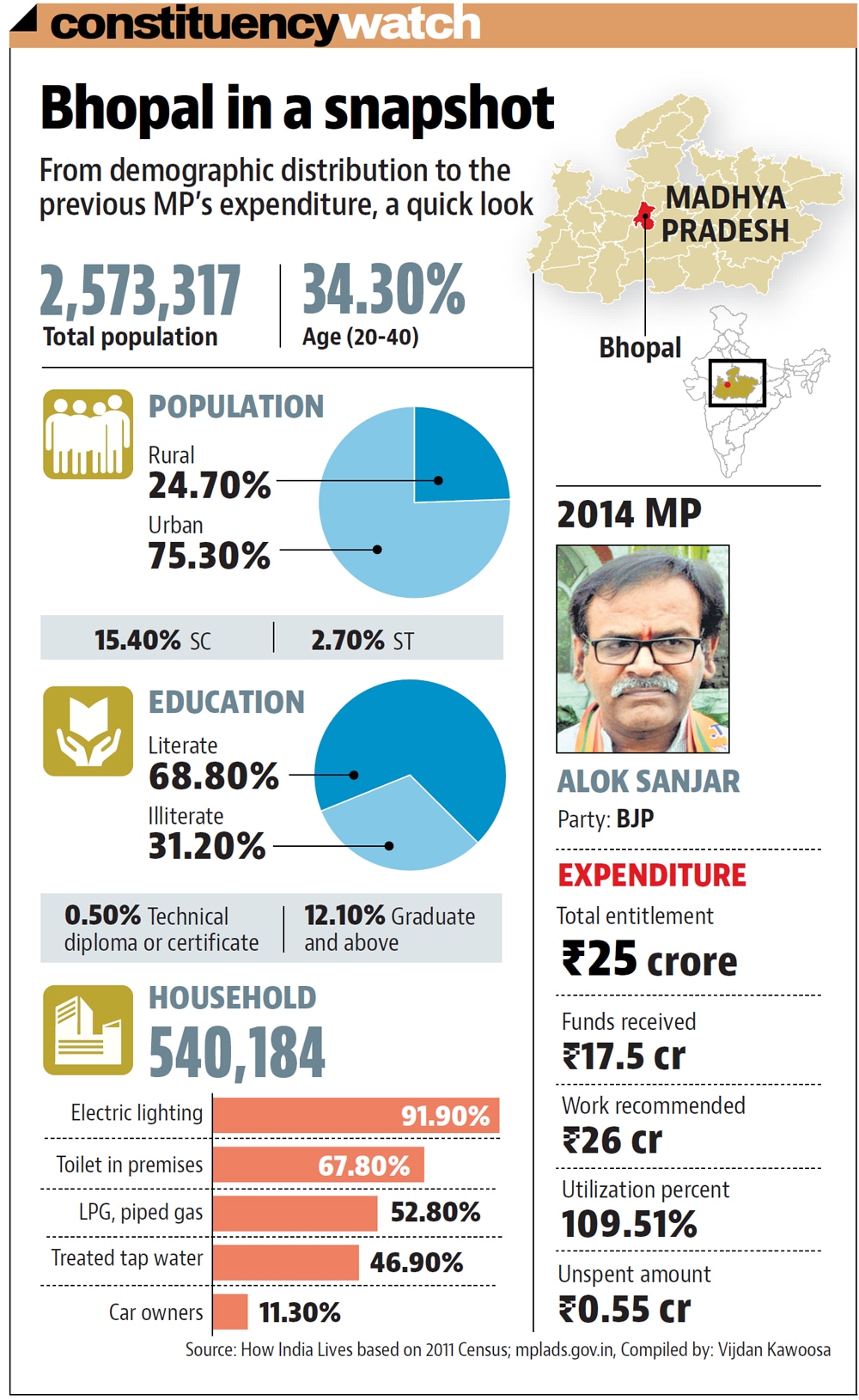 She entered her campaign with an aggressive spirit, making one controversial remark after another. She appeared to credit herself with the tragic death of Hemant Karkare, former ATS chief, while defending 2008’s Mumbai terror attack. “I cursed him,” she said about him. Later in her campaign, she termed Mahatma Gandhi’s assassin Nathuram Godse a “patriot” – a statement for which Modi said he could never forgive her.

The EC subsequently put a temporary ban on her campaign. During those 72 hours, she was seen visiting temples, serving cows, participating in pujas, and singing bhajans. Ultimately, her campaign was validated by her massive victory — she defeated Singh by 364,822 votes. She referred to her election win as the victory of “dharma over adharma”.

Thakur is now busy balancing her two roles of lawmaker and Sadhvi. HT followed Thakur around for a day. During those hours she tried to reach as many as people as she could: visiting the Shahar (city) Qazi to convey her Eid wishes, rushing to a hospital to see an ailing five-year-old kid, consoling the family of a rape victim, offering help to a trader whose small shop was gutted in fire.

Thakur’s high-security two-storey rented bungalow in Bhopal’s Riviera Town is an open house for people. Some are given food and lodging, but on the condition that they submit their Aadhaar numbers to her team.

She met at least 50 people, from Bhopal and outside, during the June 12 durbar. Then she retreated to her private section of the house upstairs. “Didi is ailing. We feel hurt when people mock her illness. She is capable of walking but after taking a few steps, she loses her strength,” said Kalpana, one of her trusted core group of eight to 10 people.

Thakur has often said her health suffered from prison torture and a preventive surgery for breast cancer. On the campaign trail, however, she claimed her cancer was cured by cow urine. Some Congress leaders accused her of feigning illness after she was seen walking in a Delhi hotel following her Parliament visit in a wheelchair. “Didi is clear at heart and a straight-forward person,” Piyush Shrivastav, convenor of her social-service organisation, Jai Vande Mataram Jan Kalyan Samiti, said.

Thakur said, “Politicians of other parties say so many wrong things against me but now I will keep mum because I know Thakurji [referring to lord Ram] is seeing everything. He [Thakurji] did justice to me after I spent nine years in jail. He gave me a platform to prove myself, and now he will give an answer to these people who are attacking a Sadhvi for no reason.”

Top among her challenges as MP is her constituency’s water shortage. The level of water in the lakes and dams is low, and the groundwater level has been termed “alarming” in parts of the city by a Central Ground Water Board study. The loss of green cover also affects daily life in Bhopal. The city’s maximum temperature has deviated by 4-6 degree Celsius due to felling of 400,000 trees in the past 10 years for development projects.

Thakur is catching up with these issues. Shortly after assuming charge, she went to see Upper Lake, one of Bhopal’s major sources of water, which has partly dried up. “Water and green cover are two major concerns. I held a meeting with authorities and asked them about how I can contribute to resolving them,” she said to HT.

“I am also going to hold a plantation drive in which at least 5 lakhs trees would be planted in rainy season in Bhopal and Sehore,” she added.

That’s not all, though. People in Bhopal expect their new MP to deliver on various other fronts, from the civic inclusion of Muslim-majority localities to the awarding of compensation to the families of victims of the Bhopal gas tragedy 34 years on.

Thakur acknowledges her job won’t be easy. “The biggest challenge is to develop trust among people, as they voted for my party and not for me. With my work, I have to create a special space in their hearts, and to make the Opposition realise that there is no term like Hindu terrorist or terrorism.”