Election rallies organised by three major political formations in West Bengal adhered to almost none of the Covid-19 safety protocols prescribed by the Election Commission of India, HT found in a spot check, highlighting the health risks of crowded public meetings at a time when infections are surging across India.

In addition, there was little arrangement made by political parties to ensure that people at the rallies wore masks or sanitised themselves. 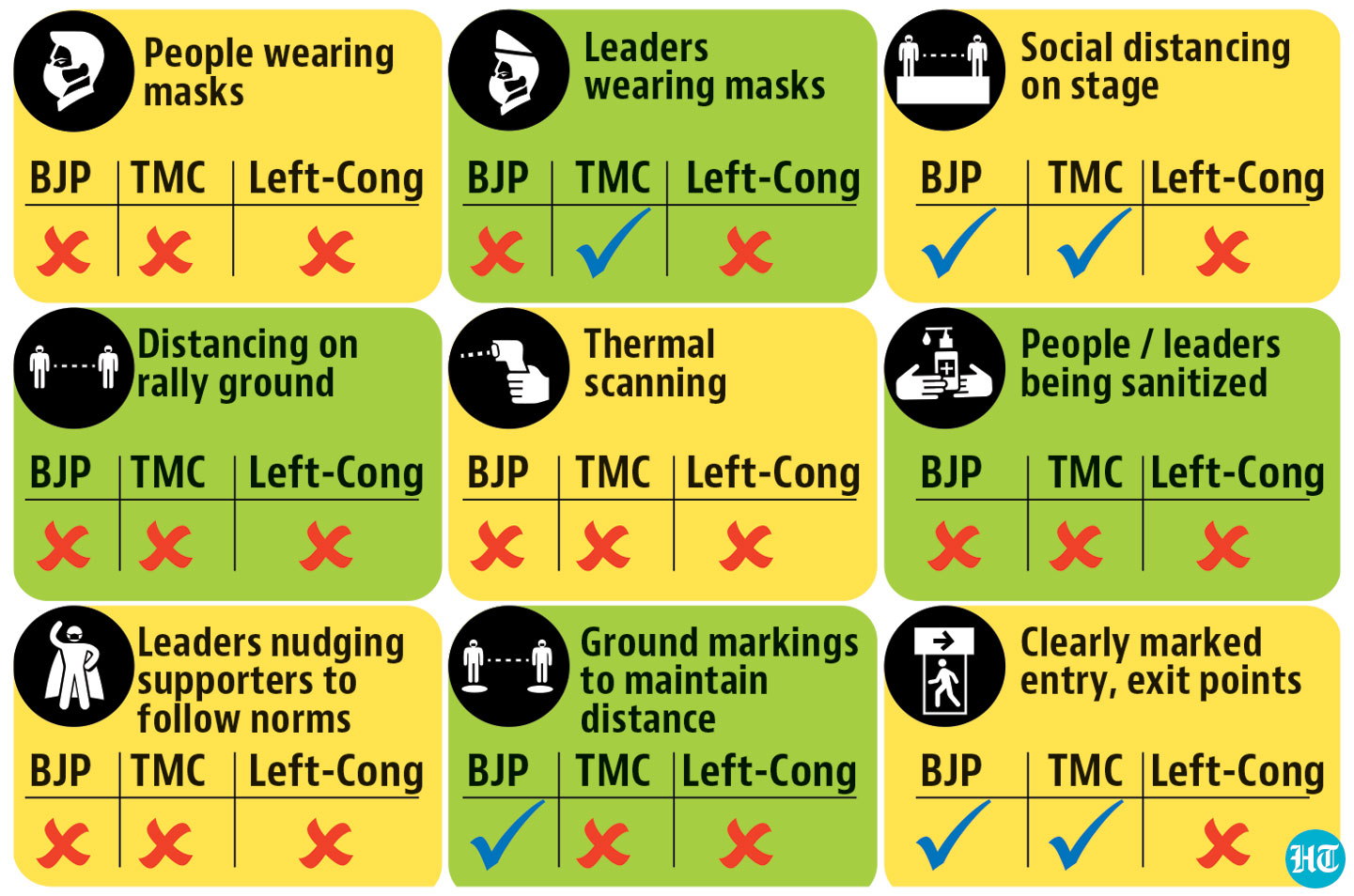 “The coronavirus has gone. There has not been a single case in these areas since last year,” said Avijit Roy, an 18-year-old BJP supporter at a rally by party president JP Nadda at Jamui in Bengal’s Purba Bardhaman district.

87km away, at a rally by TMC leader Abhishek Banerjee, Rabiul Sheikh agreed with him. “We do not wear masks. Those are for city people,” said Sheikh, a septuagenarian who supported the TMC.

A smaller roadside meeting organised by the Sanyukta Morcha in south Kolkata witnessed similar scenes, with most people in the crowd huddled together without sanitiser or masks.

Health experts said non-adherence to Covid-19 protocols was risky for a state where four rounds of the eight-phase elections were left, and political leaders had planned dozens of rallies until the last day of polling on April 29. The state has already seen a rise of17.91% in infections since March 1, and posted4,817 cases on Tuesday. Experts connect the rapid spread of Covid-19 to crowded, mask-less rallies in every corner of the state.

“We have potential superspreaders all around us, be it political rallies in the districts or rush at markets in Kolkata before the Bengali new year. Hospitals in Bengal are running out of beds. Alarming is an understatement,” said Dr Koushik Chaki, a member of West Bengal Doctors Forum. The doctors body wrote to ECI and the state government on April 7, expressing deep concern about the risk of Covid posed by election rallies.

When ECI announced polls to four states and one Union territory in late February, it also issued Covid-19 protocols to reduce transmission. This included compulsory masking, distancing, limiting maximum number of people in rallies and vehicles in convoys, and thermal checking of temperature to identify symptomatic people.

But these guidelines have been consistently flouted in the month-long campaign since, and experts have criticised the poll watchdog for failing to enforce the norms more strictly.

Last week, ECI wrote to all recognised state and national political parties and warned them it might ban rallies and meetings if guidelines were not followed during the remaining phases of elections in West Bengal. Forty-five constituencies go to the polls in the fifth phase on April 17, the largest of the eight rounds.

Elections to Tamil Nadu, Kerala, Puducherry and Assam ended on April 6. The results of all five regions will be announced on May 2.

“The Election Commission of India (ECI) had issued guidelines. As those were being flouted at public meetings and rallies, the ECI even issued a warning and was taking necessary steps. Now that the Calcutta high court has issued orders, those would be strictly implemented,” an ECI official said.

Eighteen-year-old Avijit Roy and a dozen of his fellow first-time voter friends huddled on a tractor ferrying BJP supporters from local villages to a temporary helipad at Jamui on Tuesday afternoon.

A few hundred people, many of whom crowded around the helipad built on a paddy field, were waiting for BJP national president JP Nadda to land for a road show from Jamui to Shera Bazar, a part of the Khandaghosh assembly constituency, about 130km to the west of Kolkata.

It was 2pm and the temperature was unforgiving. Yet, there was no dearth of enthusiasm among people. The only thing missing was an adherence to Covid-19 safety protocols.

“People in these parts do not care much about Covid-19 protocols. After all they have been through a long lockdown period last year,” explained Sunil Sinha, a local BJP worker whose had a pair of dark sunglasses but no mask.

Roy’s friends crowded together, shouting “Jai Shri Ram”. They didn’t wear masks but most of the local policemen and central armed police force (CAPF) personnel did. “We cannot afford to be negligent,” said a CAPF constable.

It was 3pm when Nadia’s scarlet red helicopter arrived. As the rotor blades raised a small dust storm, people ran in every direction. “This is the funny part. We love to watch helicopters land and take off,” said Roy. Nadda boarded an SUV and headed for the road show. The crowd followed him on foot huddled close to each other.

The BJP said it was focusing on making supporters follow Covid guidelines. Admitting that people were violating safety protocols at rallies, Bengal BJP’s chief spokesperson Samik Bhattacharya said, “We are formally announcing at our political programmes that everybody must wear mask but people need to be conscious.”

At a sit-in demonstration in Kolkata by chief minister Mamata Banerjee to protest a 24-hour campaign ban imposed by ECI, there was barely any distancing. TMC workers jostled to be within a few metres of her, and, outside the barricade, a few hundred people had gathered.

“I have it in my pocket. Will wear it at the right time,” said a man in the crowd, when asked why he wasn’t wearing a mask. Some had the mask on their chins and others had only covered their mouths, not noses.

“It is very hot, you see. Covering the mask make it difficult to breathe. So I have covered my mouth keeping just the nostrils uncovered,” said Sandipan Bose, a 56-year-old TMC worker.

Scores of people could be seen standing next to each other in groups on the footpath just outside the barricade and on both sides of the road. “No I hardly use a hand sanitizer. I put on my face mask and that is enough. I take it down only to have a smoke or tea when I am on the road,” said Tarun Halder, a TMC worker seen smoking at a nearby stall. A few TMC leaders were wearing masks, but sat close to each other without maintaining social distancing norms.

At another party rally in Birbhum district’s Bolpur, people were dancing in groups to film songs being played over loudspeakers from e-rickshaws that also carried men, women and schoolchildren huddled together. “This is how campaign takes place in these parts. There is no corona here,” said Rahim Sheikh, a villager.

State minister Chandranath Sinha said the large turnout at rallies was a cause for concern. “I am taking only a few aides during campaign. I am telling people not to come out in such large numbers. But nobody seems to be listening. This is an extremely difficult situation,” Sinha said.

The third front has focused on smaller events, corner meetings and door-to-door campaigns to canvass support. But even at these events, there was scant adherence to Covid-19 protocols. This was evident at a Congress rally in south Kolkata, which was much smaller in size than BJP and TMC events, on Tuesday.

Tapan Biswas, who attended the CPI(M) rally at RR Plot in east Kolkata (before the fourth phase polls) said: “Hardly anyone, including me, was wearing a mask.”

Party leaders said ECI guidelines were generic, and there was no penalty for flouting them. “It is impossible to control each and every one when hundreds or thousands of people come to attend a public meeting or a road rally. You can control the numbers and maintain the protocols to a certain extent if the meeting is being held in a hall,” said Amitabha Chakraborty, a Congress leader.

The ECI set guidelines for door-to-door campaigns that restricted the number of participants to five. But at several such campaigns, scores of party supporters were seen walking without masks and jostling for space. “We should be alert but not be terrorised,” said Tanmoy Bhattacharya, CPI-M leader.

“Mass gatherings, if allowed without properly following the safety protocols, will act as super-spreaders. The HC order is welcome. Let us hope that the administration will do something to implement it. We also need to increase our testing and strengthen contact tracing of the infected persons. Isolation of the infected person and a proper surveillance is very important. All these have taken a back seat along with maintaining safety protocols as a result of which, the cases are rising,” Manas Gumta, general secretary of Association of Health Service Doctors in the state, said.