Congress victories over the Bharatiya Janata Party (BJP) in the key Hindi belt states of Madhya Pradesh and Rajasthan are the biggest political upset since the 2014 Lok Sabha elections. A caste-wise breakup of newly elected MLAs shows that the change in political fortunes has happened without any major upset to the social groupwise distribution of power in both the states. Less than a fourth of assembly constituencies have seen a change in the caste of the MLA between 2013 and 2018 in both the states (See maps for 2013 and 2018 for Rajasthan and Madhya Pradesh).

Constituency-wise winners by caste in Rajasthan Here are some key points from the social profile analysis of assemblies in these two states.

1. Upper castes continue to have a disproportionate share among MLAs: While the share of upper caste MLAs has been coming down gradually in both Madhya Pradesh and Rajasthan, they continue to be the largest group. 2. Bipartisanship to dominant groups: To be sure, upper castes are not the only groups which enjoy high political representation in these two states. A handful of intermediate castes and Other Backward Classes (OBCs) with social, political and economic dominance in local regions also have a large share in the assembly by ensuring representation from big parties. This can be seen from the disproportionately large share of dominant groups among both Congress and BJP MLAs. In Rajasthan, at least half of both Congress and BJP MLAs come from just five castes: Brahmins, Rajputs, Banias, Jats and Meenas. Interestingly, Meenas enjoy this dominance despite belonging to the Scheduled Tribe category. In Madhya Pradesh, the dominant group capture is slightly lower than it is in Rajasthan. However it is not insignificant.

Brahmins, Rajputs, Banias, Kurmis, Gujjars and Yadavs have had a share of at least 40% among MLAs from both the Congress and the BJP (see charts 3A and 3B). 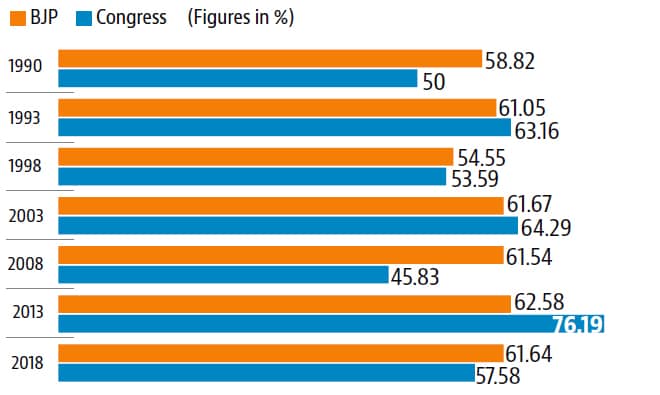 No single caste in the OBC/ intermediate caste category has a share of even 30% among MLAs from these two groups in the Madhya Pradesh assembly. As a result, OBCs have been prevented from forming stronger parties dedicated to their representation, like their counterparts in Uttar Pradesh and Bihar. Madhya Pradesh actually resembles Uttarakhand more, whose politics is also dominated by upper castes (see charts 4A and 4B) What does stability of caste representation despite political volatility tell us about the importance of caste in politics in these two sates? It shows that both major parties in Rajasthan and Madhya Pradesh are sociologically somewhat undifferentiated. Both Congress and BJP recruit their candidates from the same pool of local elite candidates, despite the rhetoric on inclusiveness and token gestures made to smaller communities.

As a result, local politics, as well as state-level politics mediated by local actors, remains largely the province of traditionally dominant groups. Both states have not seen the kind of ‘plebeian revolution’ that took place in other Hindi belt states, such as Uttar Pradesh or Bihar. This is also what sustains bipolarity in those states, and has led to the absence of a third party supported by groups under-represented under the major parties.

This finally has larger implications for the understanding of patronage, the resilience of patterns of domination and for the capacity of the state to deliver public goods to citizens.