This is the fifth time India’s second lunar mission has been postponed, but the first time it happened after the assembly of the spacecraft was completed at the country’s only launch site at Sriharikota.
Share Via
Copy Link
Hindustan Times, Sriharikota | ByAnonna Dutt

India postponed its second lunar mission, Chandrayaan-2, roughly an hour before blast-off on Monday after scientists noticed a glitch in the launch vehicle, delaying its bid to become only the fourth country to land a spacecraft on the moon.

Fifty six minutes and 24 seconds before the scheduled lift-off at 2.51am on Monday from Sriharikota in Andhra Pradesh, scientists at the Indian Space Research Organisation (Isro) noticed a snag in the indigenously built GSLV Mark III, India’s most powerful rocket, said two senior scientists on condition of anonymity.

The glitch was detected by the rocket’s inbuilt system, they added.

“This system performed precisely in the way it was designed to and we managed to save the nearly ₹1,000 crore mission in time,” said a senior Isro official who did not wish to be named.

“We were lucky that the mission did not enter the automatic launch sequence else all would have been lost. All things are in our control,” said the official, adding that the problem may have been in the rocket’s avionics or propulsion system. “We cannot launch with even 1% doubt.”

In its official statement, Isro did not elaborate on the nature of the problem. “A technical snag was observed in the launch vehicle system at T-minus 56 minutes. As a measure of abundant precaution, Chandrayaan-2 launch has been called off for today,” Isro associate director (public relations) BR Guruprasad said. 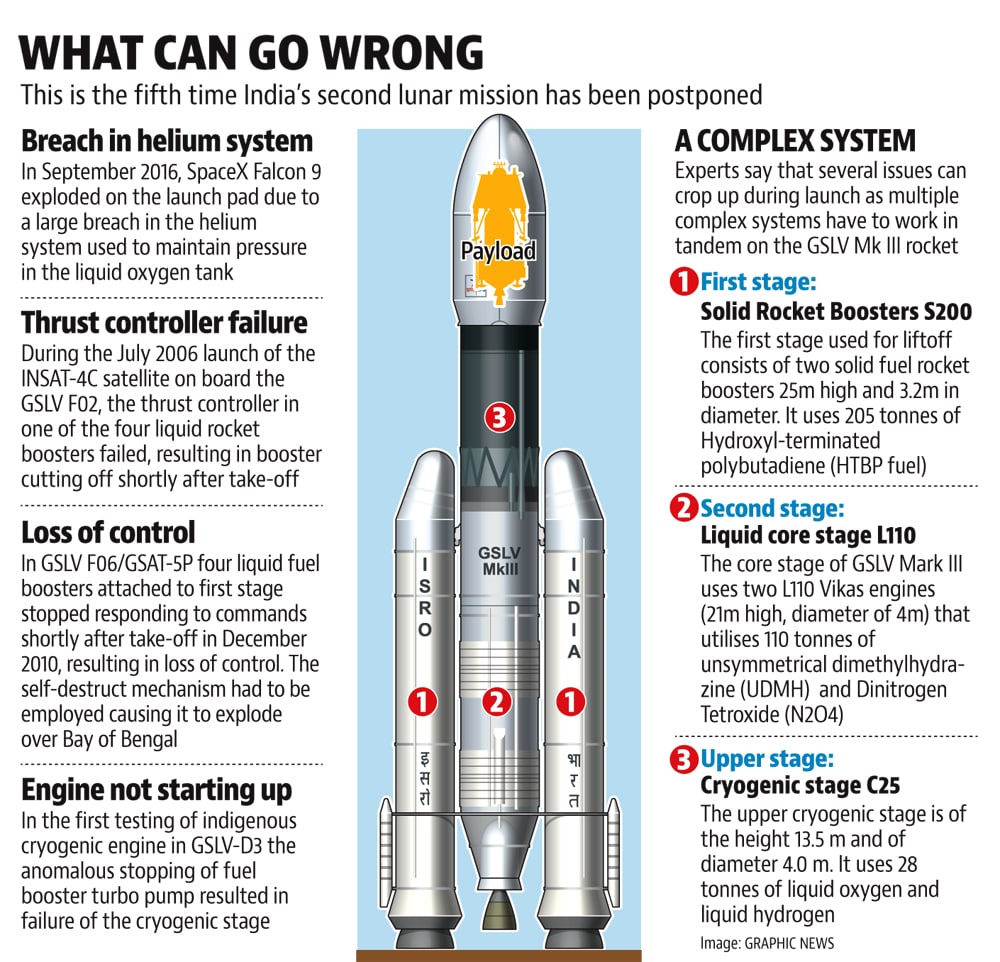 This is the fifth time India’s second lunar mission has been postponed, but the first time it happened after the assembly of the spacecraft was completed at the country’s only launch site at Sriharikota.

No revised launch schedule was released as of Monday evening but a former Isro scientist, who worked on the mission, said scientists were racing to plug the leak in time for a new launch window at the end of the month.

“The discussion now is on whether it [the snag] can be dealt with on the launch pad itself. If not, the propellant will have to be emptied and the rocket disassembled and then reassembled. This can be done in a week to 10 days and the launch window at the end of the month targeted,” said the scientist.

If that window is missed, the next opportunity for launch will come in September, which will necessitate changing the spacecraft’s orbit. This will require more fuel and likely drive up costs of the mission.

All senior Isro officials, including chairperson K Sivan, are investigating what went wrong, but no scientist has been allowed near the rocket because it is still filled with fuel. “The committee is in session. We will come to know what has happened only after they are done,” said a second official from Isro on condition of anonymity.

The 3,850kg Chandrayaan-2 consists of an orbiter that will circle the moon for about a year, taking images and testing the atmosphere; a lander named Vikram, after Vikram Sarabhai, known as the father of India’s space exploration; and a rover named Pragyaan, which was scheduled to soft-land between two lunar craters on the south pole of the moon on September 6.

It was to spend 14 days studying the topography, seismography and chemical and mineral composition of lunar rocks and look for water deposits -- confirmed by India’s first lunar mission in 2008, Chandrayaan-1, which didn’t land on the moon.

Chandrayaan-2 will follow Chang’e-4, launched by China, which in January became the first spacecraft to successfully land on the far side of the moon. Only three countries -- the United States, the erstwhile Soviet Union, and China -- have successfully landed missions on the moon.

The former Isro scientist quoted above said as the glitch was in the GSLV Mark III rocket, it could likely be fixed without putting the mission in jeopardy.

Isro’s decision to hold off the launch was hailed by experts and scientists.

“Isro has an exceptional success rate when it comes to launching systems. Checking and diagnosing complex systems in a rocket till the last minute is an art by itself, which they seem to have mastered,” said Rajesh Kumble Nayak, head of the Centre for Excellence in Space Sciences India in Kolkata’s Indian Institute of Science Education and Research (IISER).

“I am glad that people at Isro decided to hold back rather than hurrying into a major disaster. I guess the mission will be held back for a few weeks, which is much better than a failure,” Nayak told PTI.

(with inputs by Ashok Bagriya)