With the disengagement process between the Indian and Chinese armies making measurable progress in Galwan Valley, Hot Springs and Gogra, the focus of reducing tensions in eastern Ladakh has shifted to the sensitive Finger Area near Pangong Tso, which remains the “biggest test” and “hardest part” of the disengagement process, two officials familiar with the developments on the ground said on Wednesday.

The Indian Army has observed a marginal thinning of troops, vehicles and removal of structures from a key spur there over the last 24 hours, said an official, speaking on condition of anonymity. “Some Chinese People’s Liberation Army (PLA) elements have retreated from Finger 4 but it can’t, by any stretch, be seen as disengagement,” he added. 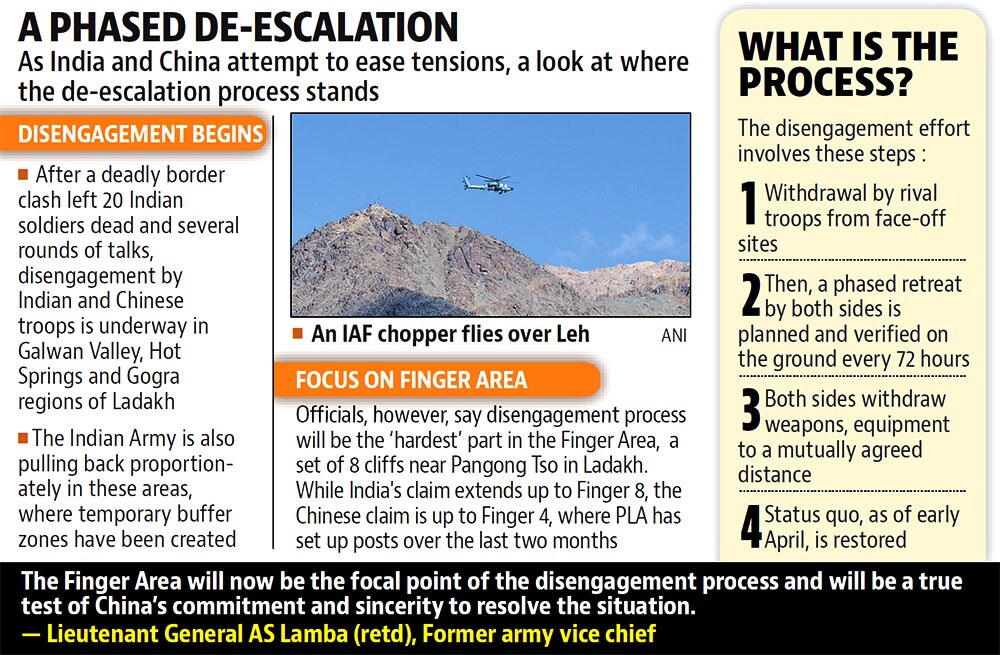 The Finger Area refers to a set of eight cliffs jutting out of the Sirijap range overlooking the Pangong lake.

The disengagement process began after military-level talks on June 30, and a subsequent conversation on July 6 between national security adviser (NSA) Ajit Doval and Chinese foreign minister Wang Yi. There is no clarity on the nature of discussions that took place on the Chinese presence in Pangong Tso — whether any decision was taken to disengage now, or to leave it for subsequent discussions after making progress in other areas. The army did not officially comment on the matter.

Before the PLA grabbed positions on Finger 4 overlooking Indian deployments, the army would patrol right up to Finger 8 that New Delhi considers within Indian territory. The new positions held by the PLA have curtailed the scope of Indian patrols. Fingers 4 and 8 are 8km apart.

The Indian claim line in this sector extends to Finger 8, while the Chinese claim is up to Finger 4 where the PLA has set up permanent bunkers, pillboxes, observation posts and tented camps over the last two months.

Military experts, too, said the Finger Area will test the disengagement process.

“Disengagement appears to be making reasonable progress in Galwan Valley, Hot Springs and Gogra. The Finger Area will now be the focal point of the disengagement process and will be a true test of China’s commitment and sincerity to resolve the situation,” said former army vice chief Lieutenant General AS Lamba (retd).

But even as uncertainty persists on Pangong Tso, the army has begun a rigourous verification process to monitor the withdrawal of the PLA from Galwan Valley, Hot Springs and Gogra, where 4-km buffer zones between troops have come up, as reported by HT on Wednesday.

While the PLA has withdrawn up to 2km from Patrolling Point 14 (Galwan Valley) and PP-15 (Hot Springs) over the last three days, a similar retreat is expected to be completed at PP-17 (Gogra) within a 24-hour time frame (by Thursday evening), said a third official. The Indian Army, too, is pulling back proportionately in these areas.

The disengagement effort involves rival troops pulling back a specified distance from face-off sites, with further retreat taking place in phases as the complex plan progresses on a verifiable basis on the ground every 72 hours by both sides. It also entails the phased withdrawal of weapons and equipment to a mutually agreed distance, and finally the restoration of status quo ante (the situation as it existed in early April).

The creation of buffer zones will temporarily restrict the patrolling activities of both armies in the region. While some experts saw this as a necessary step, others cautioned that the temporary curtailing of patrolling rights should not become a long-term feature undermining Indian presence and control.

The army is also keeping a strict vigil along the contested border in the Depsang sector, where a 2013 Chinese intrusion blocked the access of Indian soldiers to several patrolling routes, including the ones leading to PPs-10, 11, 11A, 12 and 13.

The military buildup in Indian and Chinese depth areas hasn’t thinned, with both sides keeping their guard up. The deployment of thousands of soldiers, fighter jets, helicopters, tanks, artillery guns, missile systems and air defence weapons continues in the region.

At the June 30 meeting between delegations led by Lieutenant General Harinder Singh, commander of the Leh-based 14 Corps, and Major General Liu Lin, commander of the South Xinjiang military region, the Indian side reiterated its demand for the pullback of Chinese troops from friction points along the Line of Actual Control (LAC) and sought the restoration of status quo ante in Pangong Tso, Galwan Valley, Hot Springs, Gogra and Depsang plains, apart from emphasising the need for thinning the military buildup in the region. The first part of this process is underway at the moment.