In Aadhaar-PAN linkage, a gender lost

Aadhaar recognises the third gender but PAN doesn’t. What’s at stake for the transgender community as the deadline to link the two nears?

Reshma Prasad’s latest identity crisis is not of her making. The 26-year-old Bihar-based transgender woman is in a quandary thanks to rules framed by the Indian state. Since the Finance Act (2017) made it mandatory to link the PAN card with the Aadhaar card — the deadline is now March 31, 2018 — she has been unable to do so. The reason is startlingly mundane: the PAN card application form, downloadable from the website of the Income Tax department does not, as yet, have a ‘third gender’ column. Prasad, therefore, cannot possess a PAN card that correctly identifies her gender. Prasad’s Aadhaar card identifies her as a transgender, but her existing PAN card reflects the gender assigned to her at birth, which was male. As a result of the mismatch, the two cannot be linked. To many, this may appear to be a technical error. But its implications are multiple and stand to impact the entire transgender population of the country, which according to the 2011 census, is around 488,000.

The Finance Act 2017 introduced a provision, Section 139AA to the Income Tax Act (1961), which made the linking of PAN with Aadhaar mandatory. The aim was to curb tax evasion, weed out multiple PANs, and track fraudulent financial transactions. Failure to comply with the deadline is expected to lead to the cancellation of PAN cards. It is also mandatory now, after a gazette notification of the Ministry of Finance issued last year, to provide the Aadhaar number while filing tax returns, except for those who do not have an Aadhaar card.

For the transgender community, identity is a fraught issue. Assigned a gender at birth that is at odds with their own self-identity, transgender persons also face severe stigma. Four years ago, the Supreme Court delivered the National Legal Services Authority (Nalsa) judgment, which mandated that the state should ensure social, political, and economic inclusion and offer all manner of reparation to the third gender population starting with access to welfare schemes. It also declared that self determination of identity was a cornerstone of fundamental rights guaranteed to transgender persons. Since then, various state governments have begun to set up transgender welfare boards. A government-aided college in West Bengal hired a principal who was a transgender woman; the Kochi metro hired transgender persons in different departments. The central government introduced a Transgender (Protection of Rights) Bill 2016, which is expected to be tabled in the budget session that resumes on March 5. The Aadhaar card introduced a third gender option in its application form. The PAN card, however, still does not have the option of selecting gender beyond ‘male’ and ‘female’.

“When I accept myself as a transgender person, I want every identity card to reflect my gender correctly: from car papers to medical insurance card, to property documents to PAN card,” said Prasad, who is based in Patna. “When I am fighting for my transgender identity to be recognised, then why would I change my ID card to ‘female’ or use an ID card that says ‘male’?”

No PAN, no company

Not being able to file income tax returns as a transgender person is not Prasad’s only cause for worry right now.

Last year, the state government of Bihar came out with the Bihar Startup Policy 2017. The vision was “to enable Bihar emerge as the most preferred destination for start-ups and entrepreneurs”. The policy furthermore, promised to “unleash regulatory enablers for supporting startups” registered in Bihar not prior to five years and with an annual turnover not exceeding R25 crore. Prasad submitted an idea: NaachBaaja.com, a performers aggregating platform for transgender persons, men and women. The Bihar government released a list of 32 selected ideas in October. Prasad’s was one of them. Preetesh Anand, treasurer of the Bihar Entrepreneurs Association, a not-for-profit organisation that helps first-time entrepreneurs raise a business, remembers being impressed with her idea right off the bat. “It will help create sustainable development for this community. We think of song and dance as ‘kala’, but when members of the transgender community dance or sing, we don’t associate it with ‘kala’. This business has the power to change social perception,” he said.

Anand helped Prasad create a business plan and even attempted to register her company. But once again, the lack of a PAN card in the correct gender put a spanner in the works. To receive the financial grant of R10 lakh from Startup Bihar, Prasad needs to register her company. To do that, she needs to create a Digital Signature Certificate on the website of the ministry of corporate affairs, for which both PAN card and Aadhaar are needed. The mismatch between the two has made it impossible for her to obtain this certificate, and register a company.

Mis-gendered by state and society

The matter is one of urgency, experts in the field say, for till such an order is passed, or correction made by the IT department, transgender persons will also continue to face the ignominy of being mis-gendered. Prasad is being mis-identified as ‘male’ by his PAN card. Oinam Yambung, a transman in Imphal, will soon be mis-gendered as ‘female’ on both his identity cards. The 39-year-old advocacy officer with SAATHII, a non-governmental organisation that works on access to quality HIV/AIDS services in India, had made an Aadhaar card which stated his transgender identity. When he applied for a PAN card, he ticked ‘male’ in the application form, as there wasn’t any transgender/third gender column. Last year, he found that he could not register on the income tax website because of the gender mismatch between his PAN card and Aadhaar card. So, he returned to the Aadhaar card help centre and asked for a change in gender to male, as he is a masculine-identifying person. “The people at the centre told me, ‘How can we change the gender to ‘male’ in your card? You’re born a woman.’ They didn’t know that Nalsa judgment clearly specifies that gender is based on self-determination,” said Yambung. He was forced to apply to change the gender on both his identity cards to ‘female’, even though that is not how he identifies.

“(When this is over) I will sensitise the persons at the Aadhaar centre. I’ll tell them, I am also a man. I have the right thanks to the Nalsa judgment. So why are you not able to understand me?” said Yambung. 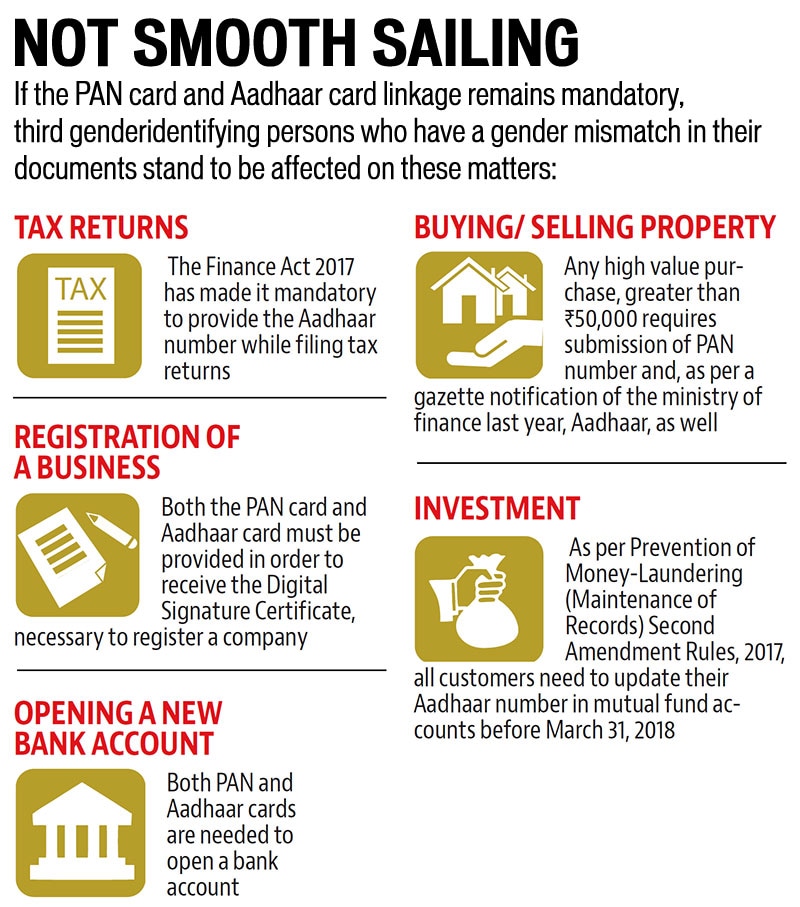 In August 2017, Prasad had written an application to the Patna office of the commissioner of income tax (admin and TPS), which was forwarded to the headquarters of the principal director general of income tax (systems), based in New Delhi on August 16, 2017. The following month, a Gujarat-based non-governmental organisation Lakshya Trust appealed to the office of the chief commissioner of income tax in Vadodara requesting for “an inclusion of a column for transgenders in the application form for obtaining PAN Card.” Lakshya Trust runs a project titled ‘Wajood’, which among other things, helps transgender persons apply for ID cards like PAN and Aadhaar. The letter was forwarded to New Delhi office on September 27, 2017. Neither has received any response since then.

Hindustan Times sent an email to Central Board of Direct Taxes with a list of questions: The PAN card application form does not have third gender column. Are there any plans in the offing to do so?; as a result of the rule that mandates giving of Aadhaar number (or enrolment number) while filing ITR, what provisions have been made for transgender persons with gender mismatch on different legal documents?; if introducing a third column is a technical matter, which organisation is responsible for getting it done, and what would be the time-frame within which they will get this done? A spokesperson responded, “We are looking into the matter, but cannot issue a statement right now.”

“I’ve tried everything,” said Prasad. Around the time that she sent a letter to the income tax department, she filed a public interest litigation in the Patna high court asking that they direct the Centre to introduce a third gender column in PAN card application forms, and update the online system of authenticating and linking the two identity cards. The court dismissed the petition stating that the matter of linking Aadhaar to various schemes was already pending before a Constitution bench in the Supreme Court, thus making it sub-judice. “They mistook my case as related to the one being heard in the Supreme Court, and dismissed it,” said Prasad.

The Supreme Court is currently hearing a clutch of 30 petitions that have been filed since 2012 challenging, among other things, the constitutionality of the Aadhaar Act 2016. Last year, the apex court issued a partial stay on Section 139AA, which made it mandatory to link PAN card with Aadhaar, providing relief only to those who haven’t got an Aadhaar card. It upheld the mandatory linking of the identity cards for those who possessed both. “But, our petition did not challenge the government notification to link PAN with Aadhaar,” explains Vikash Kumar Pankaj, the advocate who represented Prasad’s case. “We only asked that they direct the government to introduce a third gender column in PAN application forms. All government agencies are required to do this.”

A silent IT department, a PIL that has been dismissed, an indifferent technical system, and a looming deadline: Prasad’s situation seems to appear bleaker by the day, but she is not giving up.

On Valentine’s Day, Prasad, along with a group of other transgender rights activists from around the country, met up at the office of the Human Rights Law Network (HRLN) in New Delhi’s Jangpura area. Several issues pertaining to their lives were discussed, of which 12 were starred — the HRLN plans to file petitions in the Supreme Court on all these matters, including a procedure to change gender identity that is based on dignity, mandating the need for gender-neutral toilets and addressing harassment of gender non-conforming students in educational institutions. Nabila Hasan, a lawyer with HRLN will file a special leave petition in the Supreme Court to argue Prasad’s case. “We are not challenging the Aadhaar card. We are simply saying that the correct gender of the person has to be put on the PAN card,” she said.