Kashmir highlights: J&K, Ladakh to come into existence on October 31 after President’s nod

President Ram Nath Koving gave his nod to The Jammu and Kashmir Reorganisation Act, 2019 on Friday evening, ending the special status of Jammu and Kashmir (J&K). Article 370 and Article 35A, cleared in the parliament earlier this week, have defined the state’s relationship with the Union for seven decades now, were effectively rendered null and void.Jammu and Kashmir remained on high alert today though restrictions were lifted in the Valley to allow people to offer Friday prayers in local mosques. However, they won’t be allowed to congregate at Srinagar’s historic Jama Masjid. The Kashmir valley has been under lockdown since Sunday midnight, a day before the government moved to divide the state into two Union Territories and also scrapped Articles that granted special status to Jammu and Kashmir. The President okayed the move soon after both houses of Parliament passed it.The Centre is monitoring the situation and on Thursday, National Security Advisor Ajit Doval reviewed the situation in a meeting held in the Police Control Room of the J&K Police. Highlights:

Jammu and Kashmir Governor, Satya Pal Malik told ANI that PM Modi’s address to the nation on Thursday night had a calming effect. “The situation is peaceful. Relaxations will be given before and on Eid. The festival will be celebrated in a proper manner. He added that 1600 employees are on duty to ensure essential services like power supply, water and sanitation. “10,000 people in Kashmir are reporting for their duties. Most bank ATMs are operational. We’ve released advance salary for August of daily wage workers,” the Governor said.

Round the clock services available for people in Kashmir: J&K Guv

Jammu and Kashmir Governor Satya Pal Malik has said that he visited the Lalla Ded Hospital and GB Pant Children Hospital today. “There are round the clock services at hospitals. Cash has been disbursed for medicines, patient welfare and for fuel for ambulances. ‘Langars’ are operating at TRC, hospitals &other public places in Srinagar. For Eid, 2.5 lakh sheeps and goats have been arranged. 30 lakh poultry has also been arranged. We have two months stock of ration. There is sufficient stock of petrol, diesel and regular supply for LPG,” he said.

Jammu and Kashmir, Ladakh to come into existence on October 31

Two new UTs -- Jammu and Kashmir, and Ladakh -- will come into existence on October 31: MHA

President Kovind signs on The Jammu and Kashmir Reorganisation Act, 2019

Prohibitory orders banning congregation of more than 4 people under Section-144 has been removed from Jammu paving the way for reopening of schools and colleges in the region from tomorrow as per the order released by the Deputy Magistrate of Jammu district on Friday. Relaxation for Jammu follows an assessment that situation in the region was normal.

Situation in Kashmir is under control, normal in Jammu: ADGP

Muneer Khan, additional director general of police, law and order in Kathua, Jammu and Kashmir has said that the situation in Jammu is normal. While in Kashmir, the situation is under control. “All steps necessary to maintain law and order will be taken,” Khan told ANI.

“On their side, they (Pakistan) would like to project a panic situation, but that is not the situation So, it is time for Pak to stop interfering in other nation’s affairs: Raveesh Kumar.

He says, “we can only request Pakistan to re-consider its unilateral steps and we can only regret (what Pak has done).”

He added, “Pakistan thinks it will not be able to mislead people if there is development in Jammu and Kashmir.”

It is time for Pakistan to accept reality and stop interfering in internal matters of other countries: MEA spokesperson.

He adds, we hope Pakistan reconsiders its unilateral decisions and address the core issues. We can only urge them to re-consider those steps.

Raveesh Kumar said, “Actions taken by Pakistan unilateral.This has been done without consulting us.We’ve urged them to reconsider their decision.Our sense is that whatever is being done by Pakistan is to present an alarming picture of bilateral relationship.”

Airspace has not be closed, but there has been some re-routing. On Samjhauta Express, it is a unilateral decision, we never asked for it. We regret Pakistan’s decision: Raveesh Kumar

PM has articulated his vision of J-K and Ladakh

PM has very clearly articulated his vision of Jammu and Kashmir and Ladakh yesterday in his address. Now there will be more opportunities.: Raveesh Kumar, MEA spokesperson, addressing media.

Pakistan on Friday suspended the Thar Express - the last rail link with India - a day after Islamabad stopped the Samjhauta Express service between the two neighbours, reports Reuters.

“We have decided to shut down the Thar Express as well,” Reuters quoted Pakistan’s railways minster Sheikh Rasheed as saying.

Watch: Locals at a mosque in Srinagar to offer prayers

#WATCH Jammu and Kashmir: Locals arrive at a mosque in Srinagar to offer Friday prayers. pic.twitter.com/HRzWkULtfY

People are arriving at their local mosques to offer Friday prayers after restrictions in the Kashmir Valley were eased earlier in the day. 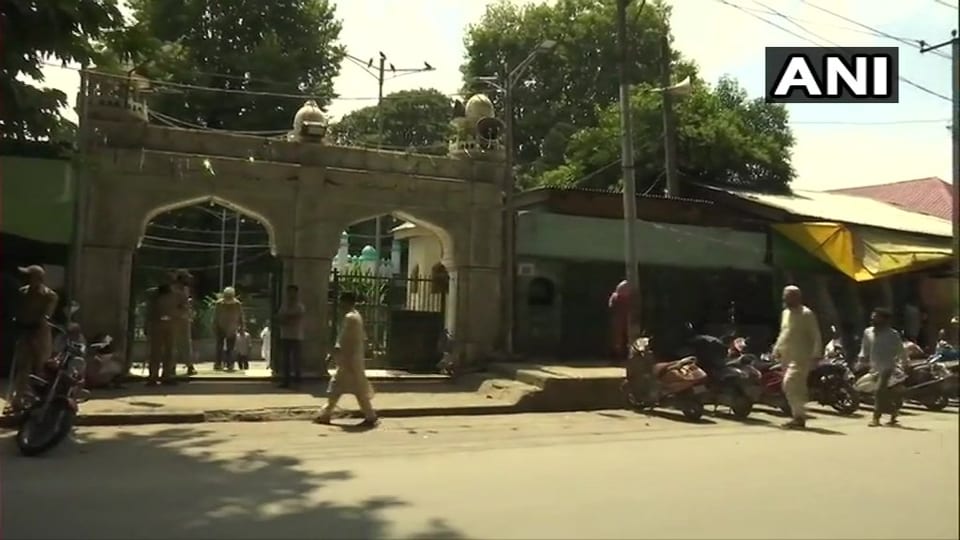 Sitaram Yechury being sent back to Delhi

CPI(M) general secretary, Sitaram Yechury is being sent back to Delhi, reports PTI quoting party sources. He, along with CPI leader D Raja, were detained at the Srinagar airport earlier in the morning. The duo had gone there to meet their party colleagues.

The CPI(M) hit out at the Centre for detaining its general secretary Sitaram Yechury and CPI leader D Raja at Srinagar airport, saying it was an “anti-democratic” act, which showed the ruling BJP’s “authoritarian face”.

“The politburo calls upon the people to protest this anti-democratic act of the BJP government,” the statement said.

“This shows the authoritarian face of the BJP government,” it added.

As with Udhampur and Samba districts, schools in Kathua, too, have reopened on Friday. All three districts fall under the Jammu division. 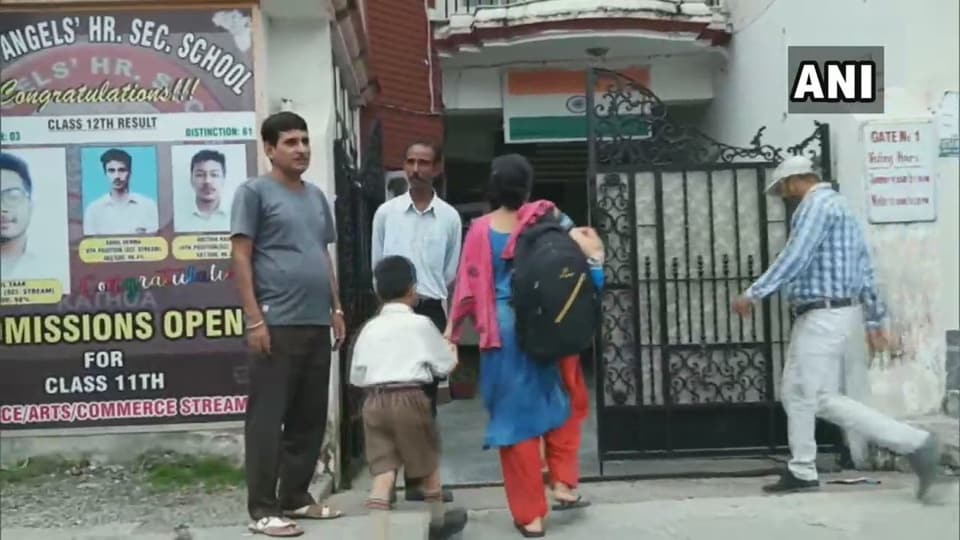 Divisional Commissioner Jammu, Sanjeev Verma, says the current situation in Jammu Division is under control and there is peace. Talking to reporters, Verma said, “rumors regarding removal of some district is totally baseless and one FIR regarding this is being registered in Samba District.”

National Security Advisor Ajit Doval visited downtown Srinagar today and spent over 2 hours in the area, reports ANI. He interacted with troops and locals and also had lunch with CRPF personnel.

‘Trying to negotiate with them’: Yechury

Yechury said he and CPI leader D Raja were detained at Srinagar airport and denied entry into the city. The Left leaders had gone there to meet their party colleagues.

Talking to PTI over phone, Yechury said, “They showed us a legal order which did not allow any entry into Srinagar. It stated that even escorted movement int the city was not permitted due to security reasons. We are still trying to negotiate with them.”

Earlier in the day, he had tweeted about his visit (see below).

Com D Raja and I are on our way to Srinagar on the 9.55 am Indigo flight to meet Com Yousuf Tarigami and our other comrades in Jammu & Kashmir pic.twitter.com/axRKZkLbV6

CPI(M) General Secretary, Sitaram Yechury has been stopped at Srinagar Airport. He had arrived in J&K to meet members of his party’s unit, there.

Srinagar residents move about for their work

Following easing of restrictions, people were seen moving about in Srinagar, taking care of their daily chores.

#WATCH Jammu and Kashmir: Latest visuals from Srinagar as people move about for their work. pic.twitter.com/UYlI6cTSMK

Schools reopened in Udhampur on Friday, reports news agency ANI. Deputy Commissioner of Udhampur Piyush Singla says,“Section 144 is still imposed, but with some exceptions in certain areas. Security plan is in place. Vulnerable areas are being monitored closely. Markets are also open from 11 AM to 5 PM”. 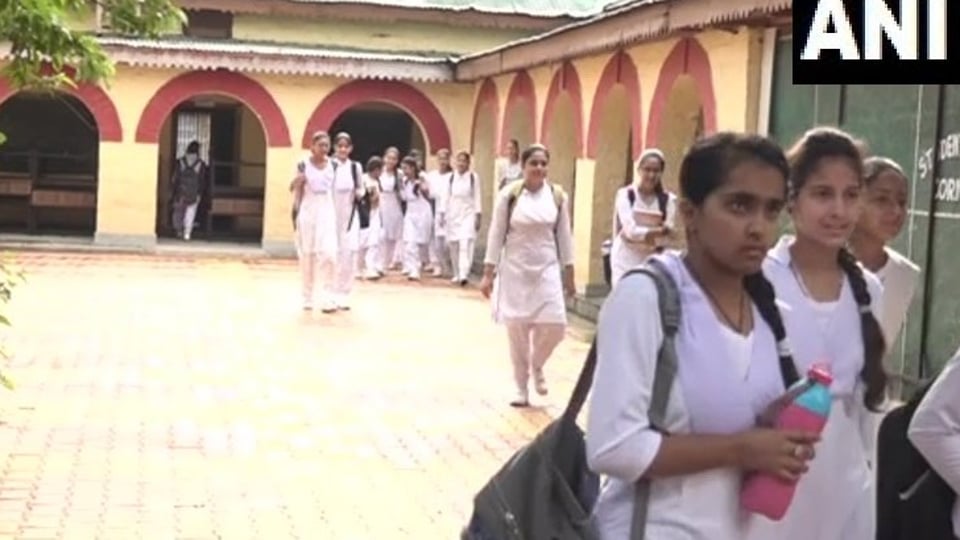 Schools reopened in Samba district of Jammu and Kashmir on Friday, reports ANI.

Restrictions to be eased in Kashmir Valley to allow Friday prayers

Restrictions will be eased to allow people in the Kashmir Valley to offer Friday prayers in local mosques, officials said. However, there will be no Friday congregation at the historic Jama Masjid, reports PTI.

The decision was taken as a precautionary measure to maintain law and order, a day after restrictions in some parts of the civil lines areas of the city and Dal Lake were eased to allow free movement of people, they said.