A three-judge bench, headed by Chief Justice of India (CJI) NV Ramana, held that the spectrum of legal questions emanating from the tussle between the factions belonging to Maharashtra chief minister Eknath Shinde and former CM Uddhav Thackeray requires to be dealt with by a larger bench for an authoritative pronouncement.

The Supreme Court on Tuesday referred the adjudication of legal issues arising out of the split in Shiv Sena to a Constitution bench of five judges, noting that the matter “raises important issues” involving the contours of disqualification proceedings and the powers of the Governor and the Speaker in their respective spheres — a move that, once the top court rules on the matter, will clarify several contentious and sticky issues which have been raised time and again over the past decade.

A three-judge bench, headed by Chief Justice of India (CJI) NV Ramana, held that the spectrum of legal questions emanating from the tussle between the factions belonging to Maharashtra chief minister Eknath Shinde and former CM Uddhav Thackeray requires to be dealt with by a larger bench for an authoritative pronouncement.

In its order of reference, the bench, which included justices Krishna Murari and Hima Kohli, also doubted the correctness of the 2016 judgment by another five-judge bench in the Nebam Rabia (Arunachal Pradesh disqualification) case in holding that the Speaker cannot initiate disqualification proceedings when his own removal is sought. 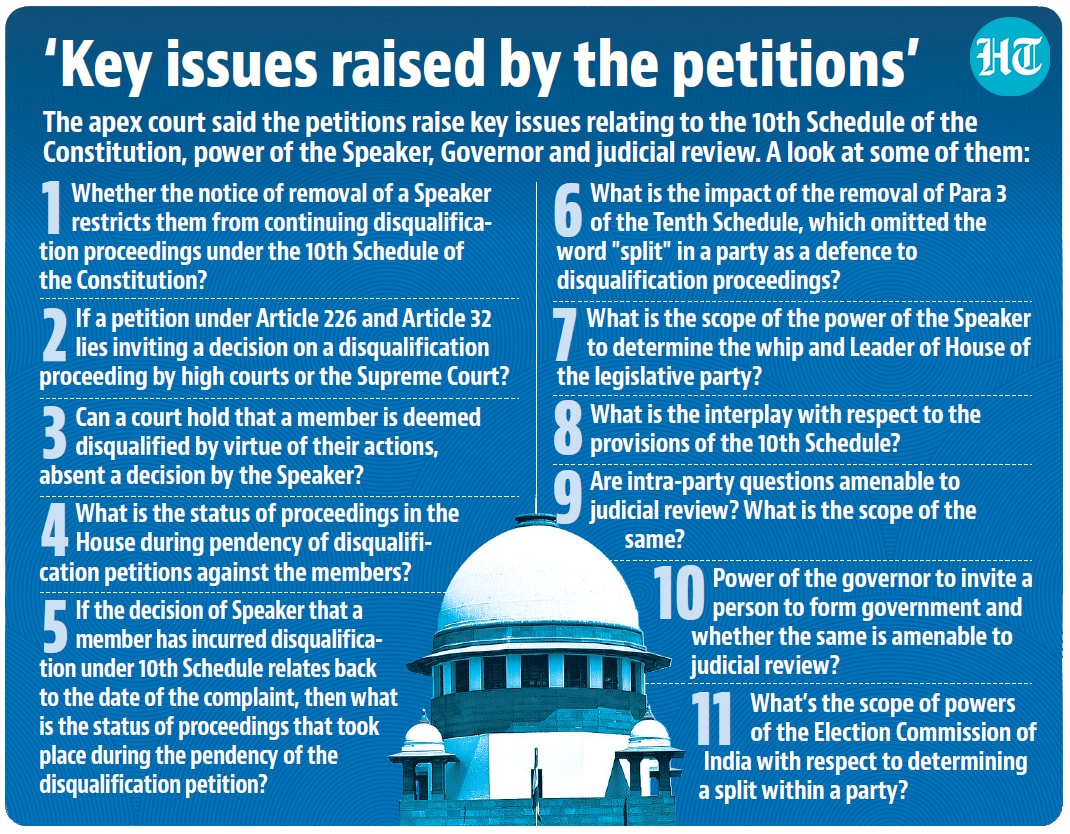 While the composition of the larger bench is yet to be known, it will sit on Thursday to take up a plea by the Uddhav camp to stop the Election Commission of India (ECI) from acting on Shinde’s plea to declare his group as the “real” Shiv Sena and allot the bow and arrow symbol.

Asking ECI to stay its hands in the matter till Thursday, the CJI said that the Constitution bench will consider the Uddhav faction’s plea as the first issue in the wake of a contention that a decision by ECI in favour of Shinde will render the whole proceedings before the top court meaningless.

Apart from the stay on the proceedings before ECI, there is also a court-mandated restraint on the Maharashtra Speaker against disqualifying MLAs from either the Shinde or the Uddhav camp.

While the Shiv Sena has not split formally, the faction led by Shinde is supported by a majority of the party’s legislators; it has also claimed that it is the Shiv Sena.

The raft of issues framed by the three-judge bench in its order on Tuesday included the question as to whether the notice of removal of the Speaker restricts him from continuing the disqualification proceedings under the Tenth Schedule (anti-defection law) of the Constitution.

Other issues included the maintainability of a writ petition before a high court or the Supreme Court for inviting a decision on a disqualification proceeding and whether a court can disqualify a legislator. The bench also sought the larger bench’s decision on the sanctity of the proceedings and decisions taken in the House during the pendency of disqualification petitions against the members and after they are held to be disqualified.

The court further framed a legal issue regarding the authority of the Governor to invite a person to form the government and whether the same is amenable to judicial review. It also asked for a determination on the scope of the power of the Speaker to determine the whip and Leader of House of the legislative party.

The five-judge bench has been called upon to ascertain the impact of the removal of Para 3 of the Tenth Schedule, which did away with a split in a party as a defence against disqualification of members and the scope of the powers of the Election Commission of India with respect to determining a split within a party. “Are intra-party questions amenable to judicial review?” another issue framed by the court asked.

The coup led by the rebel MLAs forced Uddhav to resign as CM on June 29, leading to a dramatic takeover by Shinde as Maharashtra CM on the very next day. Later, the Shinde faction also proved majority on the floor of the House with the support of the Bharatiya Janata Party (BJP), whose leader Devendra Fadnavis took oath as deputy chief minister on June 30.

On July 20, the court observed that some “important constitutional issues” emanate from the petitions arising out of the split in the Shiv Sena, musing that a larger bench may be needed to settle the points of law. The court had on that day asked both sides to submit the legal issues involved in the matter to enable it to examine if a constitution bench should ideally hear it.

While the Uddhav camp has implored the top court to itself decide the disqualification petitions against the legislators from both factions, the Shinde camp argued that an intraparty dissent against the leadership is not an issue to be decided through a judicial order and that the petitions filed by the Uddhav camp are not sustainable in law since they intrinsically involve political issues.

The top court is seized of a batch of six petitions filed by Shinde and Uddhav factions in relation to disqualification proceedings against the MLAs of both camps, election of Rahul Narwekar as new Speaker of the assembly, recognition of a new party whip for Shiv Sena, and the governor’s directive to Uddhav for proving majority on the floor of the house and subsequently inviting Shinde to form the new government in the state.

While the first two petitions in the Supreme Court were filed by the Shinde faction to stop the deputy speaker (there was no speaker at the time) from disqualifying them as MLAs, the Thackeray camp also approached the apex court later, challenging the actions of the governor in directing Thackeray to prove the majority on the floor of the House as well as inviting Shinde to form the government in the state.

The Uddhav camp further challenged Narwekar’s decision to recognise Shinde as the leader of Shiv Sena and appointment of a new chief whip of the party. Apart from these petitions, the Uddhav camp has also moved a plea to stop ECI from deciding Shinde’s plea on recognising the latter’s group as the real Shiv Sena and allot to them the bow and arrow symbol.

In 1985, the Constitution was amended to institutionalise the concept of disqualification on the ground of defection and the Tenth Schedule was added, which is commonly referred to as the anti-defection law. The law applied to both the Lok Sabha and state assemblies.

The 1985 amendment recognised splits and mergers as exceptions to the rule of defection. A split takes place when at least a third of the members of a political party form a group of their own, while a merger occurs when two-thirds of the members supported the move for a merger with another political party. However, the 91st amendment of the Constitution in 2003 did away with the concept of a split in a political party, and deleted the impugned provision from the Tenth Schedule. The 2003 amendment resulted in mergers becoming the only exception against the rule of defection.