Number of seats and date of polls 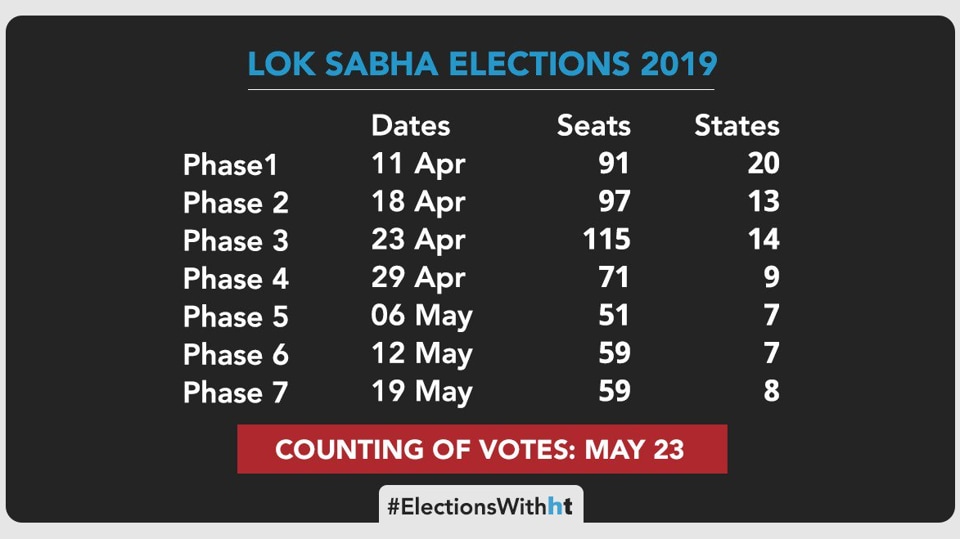 Urge people to participate in the festival of democracy: Biplab Kumar Deb

General #Elections 2019 have been declared! Best wishes to Election Commission for smooth conducting of elections. Elections to be conducted in #Tripura in 2 phases- 11 & 18 April. Urge my fellow citizens of Tripura to wholeheartedly participate in the festival of democracy: Biplab Kumar Deb, Tripura CM

Commission has also directed political parties/candidates to desist from using environmentally hazardous publicity material and promote usage of eco friendly substances for preparation of election campaign material, this is a kind of appeal to everybody: CEC

EVMs used in this country for over two decades: CEC

EVMs used in this country for over two decades: CEC when questioned on doubts raised by Opposition leaders about the functioning of EVMs.

We have tried to cover left-wing extremism affected areas of various states at one go. Once the left-wing affected states get covered which require much more force, then those forces can move to other areas: CEC

Time to throw out the most dictatorial and anti-federal govt in the history of India: Kejriwal

Ultimately back to We the people -the real power of our democracy. Time to throw out the most dictatorial and anti-federal govt in the history of India. Time to seek answers on demonetisation, jobs, destruction of traders n destroying brotherhood amongst different communities: Arvind Kejriwal

Call upon the people of India to turn out in record numbers: Amit Shah

We welcome the declaration of elections for the 17th Lok Sabha. I call upon the people of India to turnout in record numbers and enhance the vibrancy of India’s electoral process: Amit Shah

Hope elections are conducted in a level playing field: Kumaraswamy

India is set for another election. In this battle of democracy, I hope elections are conducted in a level playing field. All parties and candidates must follow the guidelines issued by the ECI and uphold the values of democracy, and respect the decision of the voters: Kumaraswamy

First time since 1996, assembly polls in J&K are not being held on time: Omar Abdullah

“First time since 1996 Assembly elections in J&K are not being held on time. Remember this the next time you are praising PM Modi for his strong leadership. What happened to @rajnathsingh’s assurance to Lok Sabha & Rajya Sabha as well as to the all party meeting recently in Delhi that all forces would be made available for simultaneous polls?” tweets Omar Abdullah.

The festival of democracy, Elections are here. I urge my fellow Indians to enrich the 2019 Lok Sabha elections with their active participation. I hope this election witnesses a historic turnout. I particularly call upon first time voters to vote in record numbers: Narendra Modi tweets

The festival of democracy, Elections are here.

I urge my fellow Indians to enrich the 2019 Lok Sabha elections with their active participation. I hope this election witnesses a historic turnout.

I particularly call upon first time voters to vote in record numbers.

High-powered committee looking into complaints regarding EVMs. We are waiting for the report. All bypolls to be held simultaneously with Lok Sabha polls: CEC

No assembly elections in J-K

EC recently visited J-K, met political parties and govt officials. Due to constraints in number of security forces and recent violent incidents in J-K, there will be no elections in the state. Three special observers for J-K: CEC

Five-phase poll in J-K, no state to have six-phase polls

Dates of polling and number of seats

Elections to be held in seven phases

Elections to be held in seven phases. April 11 voting, May 23 counting: EC

IT giants have promised action against hate speech: CEC

IT giants such as Google and Facebook have promised action against hate speech: CEC

All political ads on social media will require pre-certification: CEC

Measures being taken to reach out to voters in the remotest of corners in the country using community radio, folk arts. Candidates asked to declare social media accounts. All political ads on social media will require pre-certification: CEC

Citizen app will help public reach out to us: CEC

Special observers will be sent to sensitive states. Stringent monitoring of all events on poll days using information technology. cVIGIL, a citizen app, will help public reach out to Election Commission on any malpractices: CEC

If we seize unaccounted cash, we put it out in local newspapers for information. This protects the identity of whistleblowers: CEC

Faces of candidates on EVMs: CEC

Faces of candidates on EVMs. Central police forces to be deployed in large numbers. CEC refuses to disclose exact number.

VVPAT, paper trail in all polling stations. Model Code of Conduct comes into effect from today itself in the entire country. Any violation will be dealt with in the strictest manner: CEC

Photo of candidate to make sure the voter has clarity. 10 lakh polling stations, increase of 10%: CEC

We held discussions with the home ministry. Officials have been slogging for months to ensure credible elections. Total electorate 900 million, 84.3 million voter increase. 15 million between age of 18 and 19: CEC Sunil Arora

Exams, festivals, harvest, weather factored in for deciding poll dates. We are trying for participatory elections. We also looked into examination schedules and festivals before deciding on the poll schedule: CEC Sunil Arora

CEC Sunil Arora says Indian elections a beacon light for all emerging democracies. The poll panel held deliberations will several departments including railways to ensure a smooth process. A team of the Election Commission visited different states and union territories, he says.

Lok Sabha Elections 2019: All you need to know about Madhya Pradesh ahead of polls 2019

The Congress party got a major boost ahead of the Lok Sabha 2019 election in the Hindi heartland state of Madhya Pradesh as it wrested power from the BJP after 15 years by winning the assembly polls held last year.

The BJP had swept the national polls in Madhya Pradesh in 2014 and won 27 out of the 29 Lok Sabha seats in the central state. The grand old party had won only two seats that year – chief minister Kamal Nath from Chhindwara and Jyotiraditya Scindia from Guna. In 2015, Kantilal Bhuria won the Jhabua-Ratlam by-election following the death of Dileep Singh Bhuria.

The Lok Sabha election 2019 and assembly polls are likely to be held simultaneously in the coastal eastern state of Odisha, where the ruling BJD has held the fort for nearly two decades now.

The Bharatiya Janata Party (BJP) has been working towards getting a foothold in Odisha, identified as one of the priority states ahead of the polls, and prepared a blueprint with the twin objective of strengthening the organisation and gaining mass support in the state.

When the election schedule is announced on Sunday evening, the model code of conduct will immediately come into effect.

Also Read| Lok Sabha election 2019: Model code of conduct: What it means, how it is enforced

The Election Commission on Saturday directed political parties to desist from displaying photographs of defence personnel in advertisements or otherwise as part of their election propaganda or campaigning.

The direction came after a complaint by the ministry of defence.

Lok Sabha elections are expected to be held in seven to nine phases.

Elections will be held for 543 seats of Lok Sabha

The elections will be held for 543 seats of the Lok Sabha on approximately 10 lakh polling booths across the country.

Dates for Lok Sabha elections to be announced by poll panel at 5 pm today.