It’s television’s biggest night of the year at the Emmy Awards 2019 in Los Angeles. There were stars aplenty but no ringmaster for the three-hour show. However, it went just as smoothly as February’s no-host Oscars. HBO’s Game of Thrones won two big awards of the night but Phoebe Waller Bridge’s Fleabag got the most wins. The Television Academy’s 24,000-plus voters had two weeks in August to pick their favourites. Check out highlights from the Emmy Awards ceremony here:

Game of Thrones wins best drama series. The show ran for eight seasons and is considered the most popular show to have ever existed. 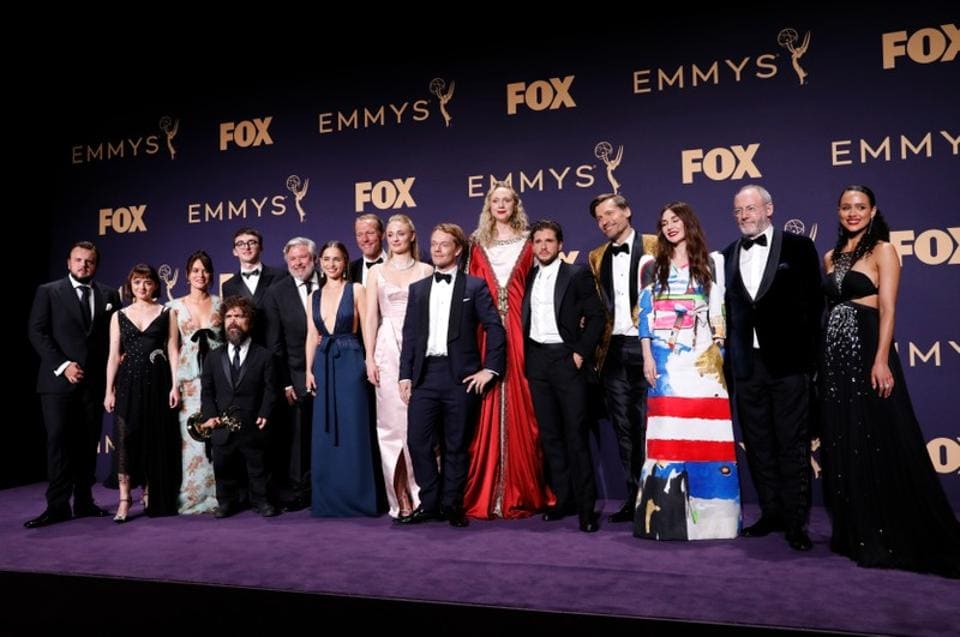 The cast of Game of Thrones pose backstage with their award for Outstanding Drama Series. ( REUTERS )
8:25:00 AM IST

Phoebe Waller Bridge’s show Fleabag has scored its fourth and final win of the night. It won the best comedy series award. “This is just getting ridiculous,” Phoebe said in her speech. Read our review here.

Jodie Comer has won the best lead actress award in a drama series for Killing Eve. She plays Villanelle on the show written by Phoebe Waller Bridge. 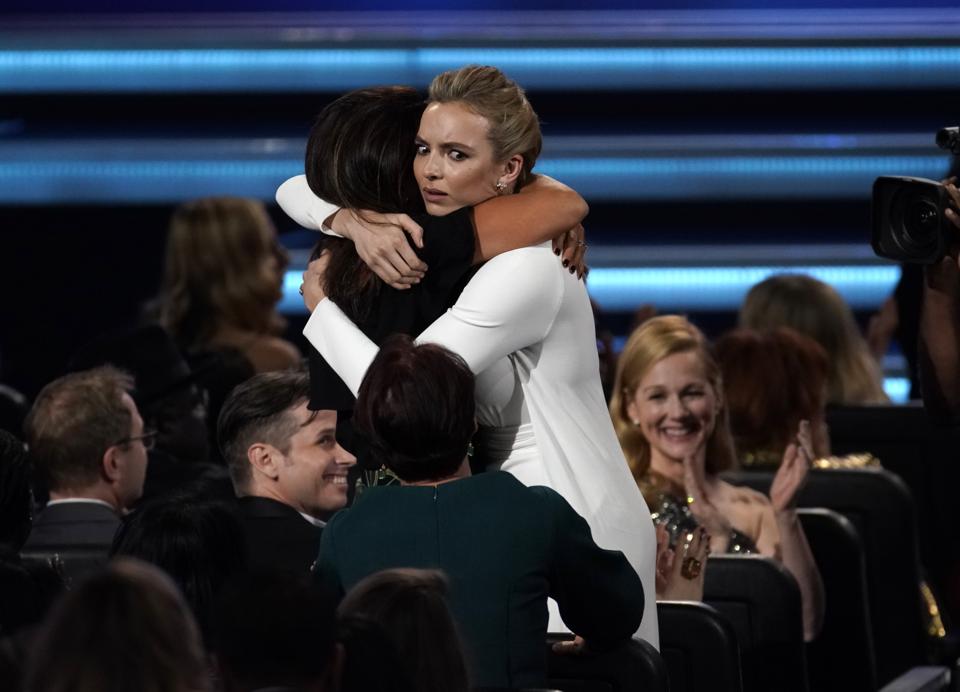 Jodie Comer reacts as she wins Outstanding Lead Actress in a Drama Series for Killing Eve. ( REUTERS )
8:15:00 AM IST

Jason Bateman won best directing (drama) Emmy for Ozark. His reaction to his name being announced has now turned into a meme.

Billy Porter has won the Best Actor trophy for Pose, beating the likes of Kit Harington and Bob Odenkirk. This is his first Emmy win. “The category is love, y’all, love,” he said on stage as he accepted his award. 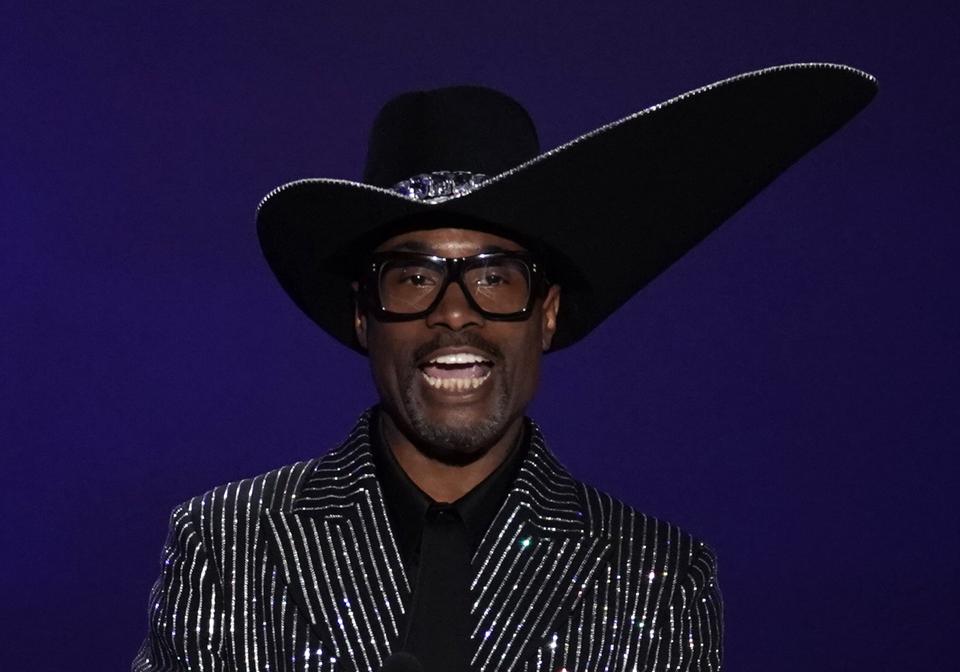 Julia Garner wins the award for Best Supporting Actress in a Drama Series for Ozark, beating out Sophie Turner, Maisie Williams, Lena Headey, and Gwendoline Christie from Game of Thrones. 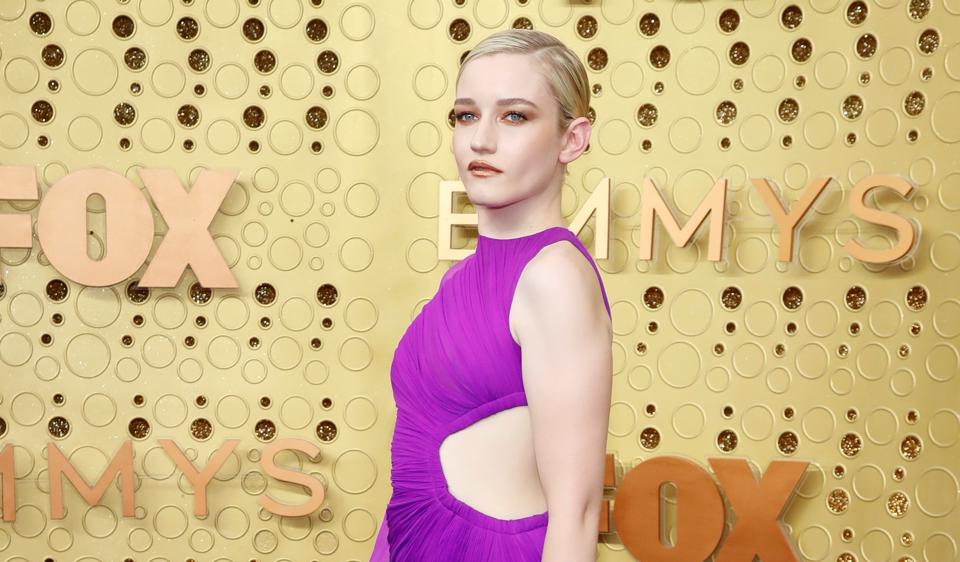 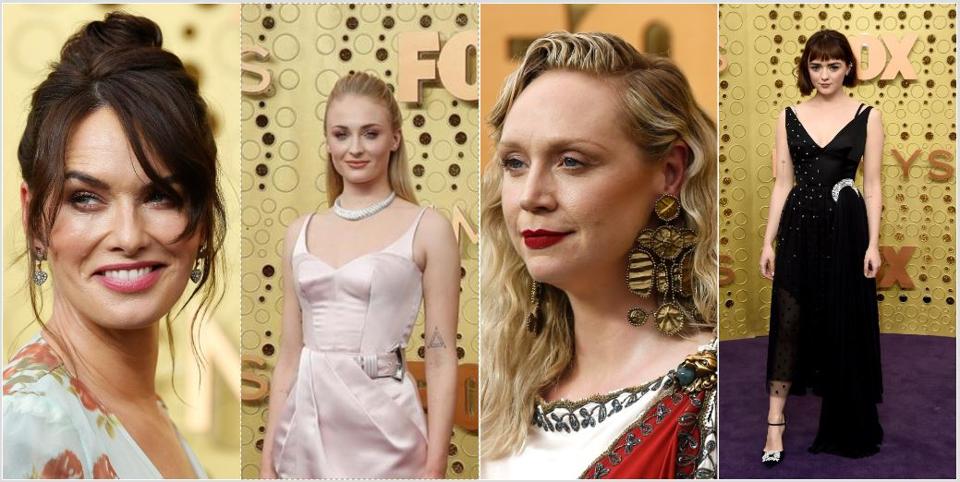 Peter Dinklage has won the best supporting actor award for Game of Thrones. This is his fourth Emmy win. “I would do it all again in a heartbeat,” he said in his speech. Read our review for the finale here. 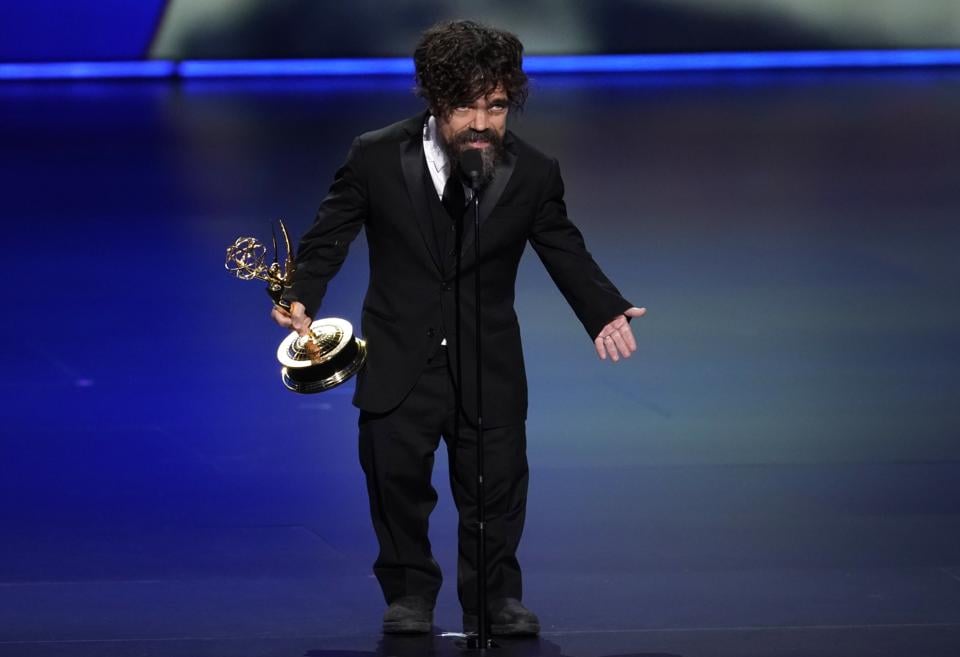 Peter Dinklage accepts the award for Outstanding Supporting Actor in a Drama Series for Game of Thrones. ( REUTERS )
7:34:00 AM IST

Game of Thrones cast moments win over the internet

Alfie Allen shared a stunning selfie with the entire cast of Game of Thrones on Instagram. A video from the ceremony shows a sweet moment between Sophie Turner and Kit Harington. 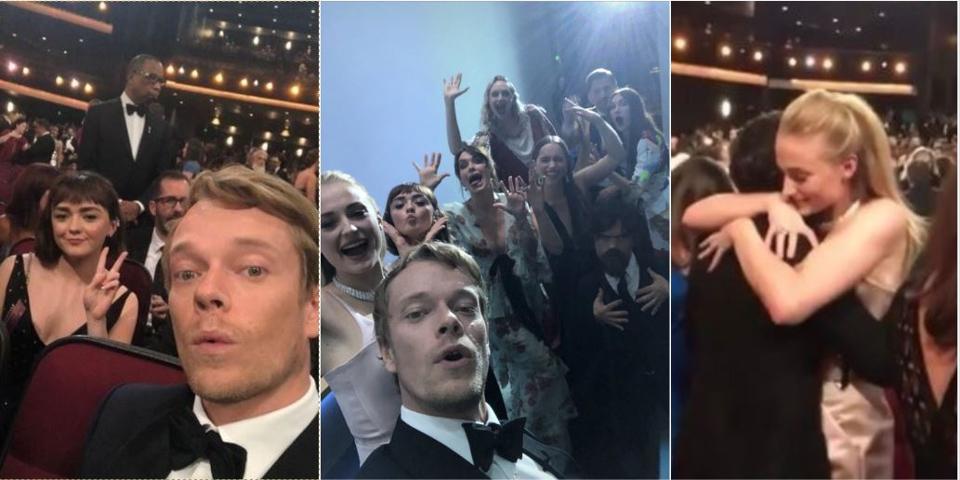 Saturday Night Live has won the Best Variety Sketch Series. The episode submitted for consideration was the Adam Sandler-hosted episode, in which the SNL veteran paid tribute to the late Chris Farley. 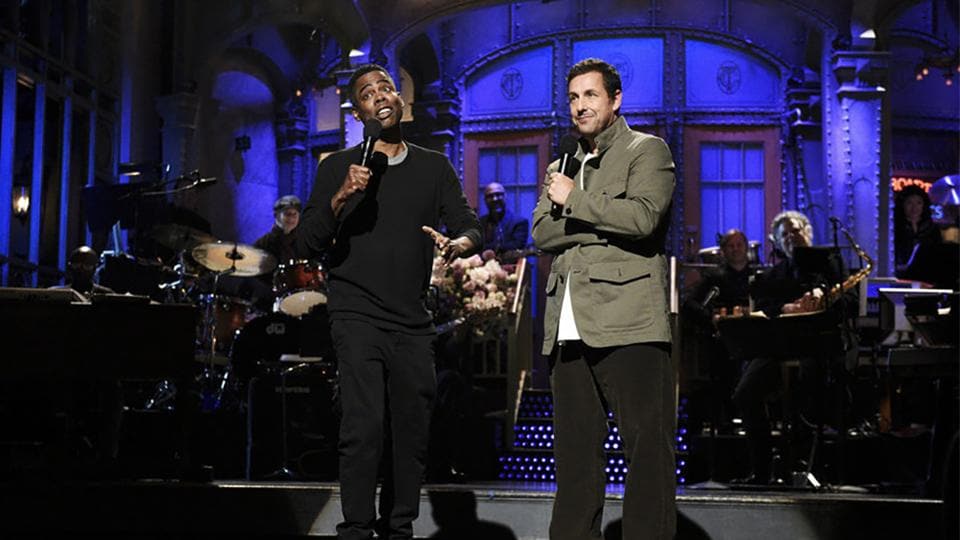 Chris Rock and host Adam Sandler during the I Was Fired monologue on SNL. ( Will Heath/NBC )
7:24:00 AM IST

Last Week Tonight With John Oliver wins best writing for a variety series. On his show, Oliver tackles a variety of issues from around the world.

HBO’s hit show Chernobyl has won the award for Best Limited Series as expected. This takes the show’s trophy tally to 3 for the night. 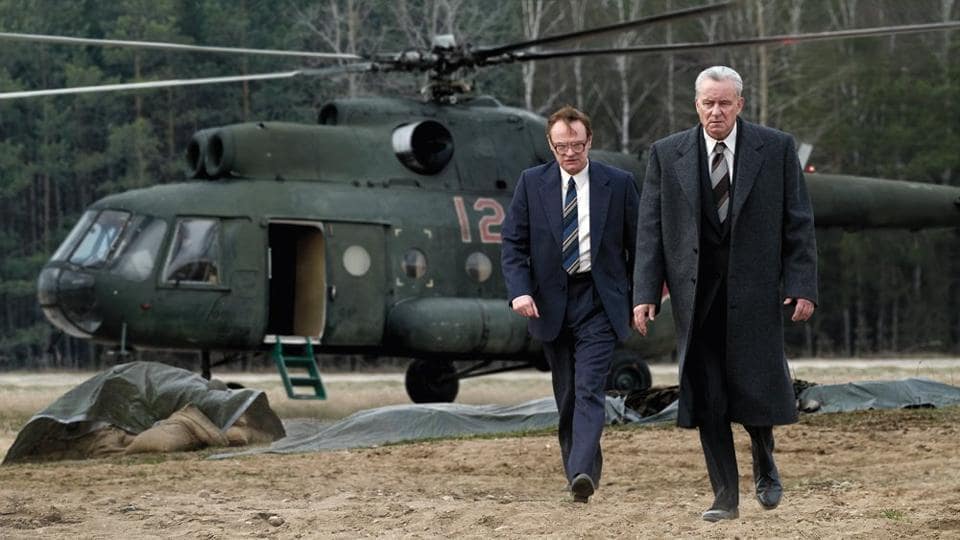 Stellan Skarsgard and Jared Harris in still from Chernobyl.
7:07:00 AM IST

Michelle Williams wins best lead actress in a limited series for Fosse Verdon. She played the popular actor Gwen Verdon in this series about a failed marriage and life in the showbiz. Read our review here.

“The next time a woman, and especially a woman of color, because she stands to make 52 cents on the dollar compared to her white male counterparts, tells you what she needs in order to do her job, listen to her, believe her,” she said in her speech. 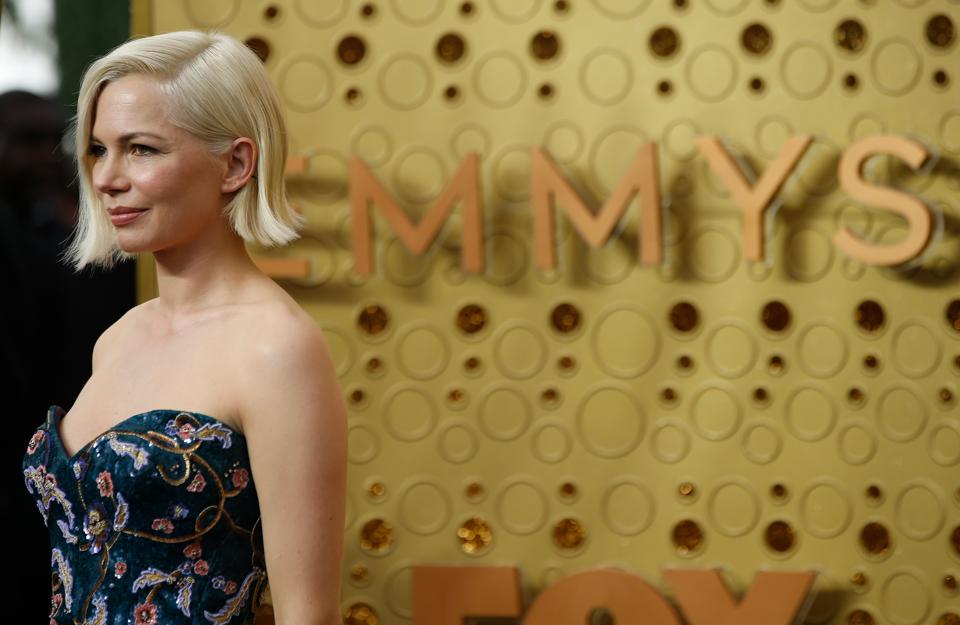 Black Mirror special episode Bandersnatch has won the Best TV Movie award. The episode was path breaking for how it got viewers to participate and interact with the character. Read our review here.

Jharrel Jerome wins best actor in a limited series or movie for Netflix’s When They See Us. The show was about five young black men accused of raping a white woman in New York’s Central Park in the 1980s. It is the first win of the night for the series written and directed by Ava Duvernay. Read our review here. Craig Mazin wins for best writing for a limited series

Craig Mazin has won best writing for a limited series or movie for HBO show Chernobyl. Craig earned a lot of praise for his show based on the 1986 nuclear disaster. ““I’m very pleased to accept this in their memory,” he said in his speech. Read our review here.

Ben Whishaw has won the best supporting actor for a limited series or movie for A Very English Scandal. He starred on the show with Hugh Grant.

Best Directing for a Limited Series goes to Johan Renck

HBO’s Chernobyl got its first award for the night with Best Directing for a Limited Series going to Johan Renck. Read our review here.

Patricia Arquette has won best supporting actress in a limited series for The Act. 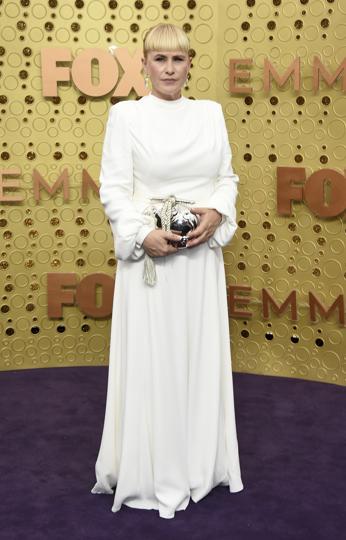 The cast of Game of Thrones, including Sophie Turner, Carice Van Houten, Maisie Williams, Kit Harington, Emilia Clarke and other took the stage at the Emmys. 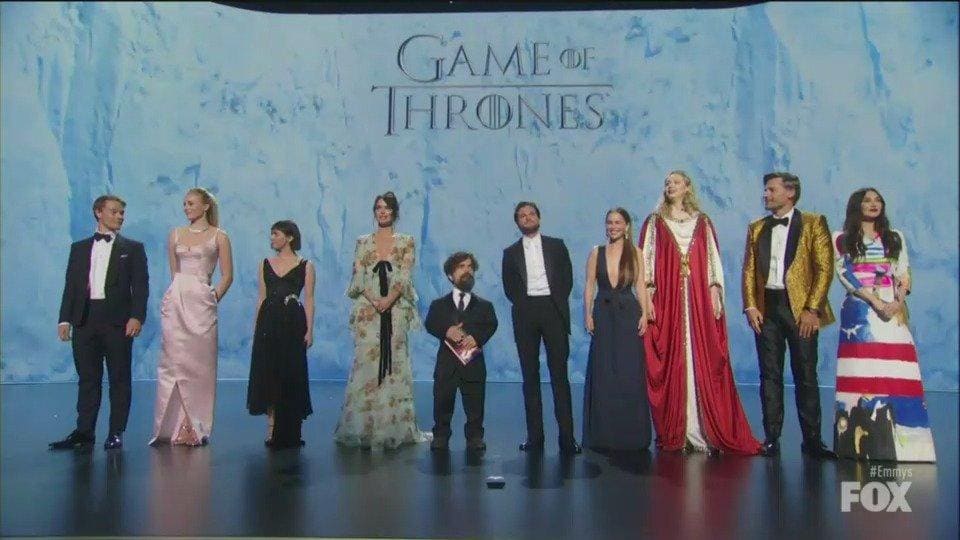 Phoebe Waller-Bridge wins best actress in a comedy series for Fleabag. “No! Oh my God... No... I find acting really hard and really painful,” she said. Read our review here. The Emmy Award for best actor in a comedy series has gone to Bill Hader of Barry for the second straight year. Hader took home the Emmy for the HBO comedy about a hit man-turned-actor. 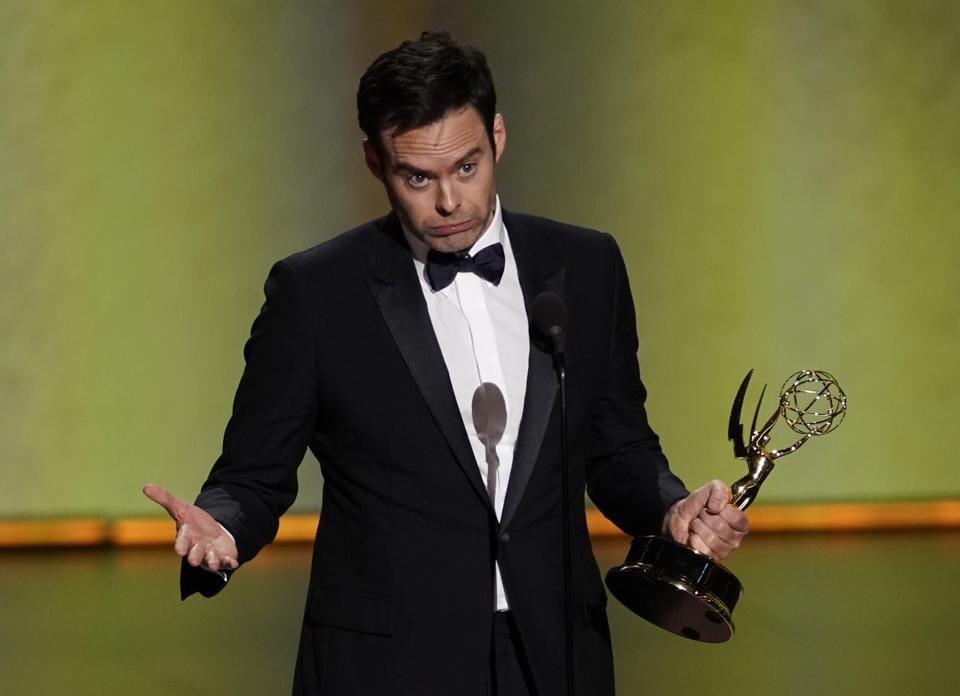 Bill Hader accepts the award for Lead Actor in a Comedy Series for Barry. ( REUTERS )
6:05:00 AM IST

Harry Bradbeer has won the best directing for a comedy series for Fleabag. He thanked his “crew who made something beautiful for almost no money. A cast who only has to open their mouths to make me look good. And thank you, Phoebe, for coming into my life like a glorious grenade.”

Phoebe Waller Bridge has won her first Emmy for the night. She won for best writing for a comedy series for her series Fleabag. “Look at her,” she said on stage with her Emmy in her hand. 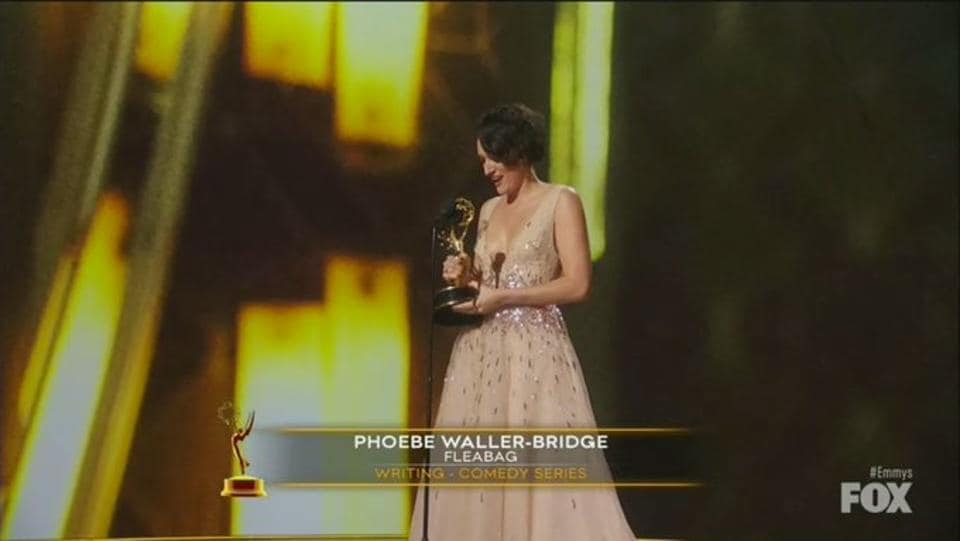 The Emmy Award for best supporting actress in a comedy series goes to Alex Borstein for The Marvelous Mrs. Maisel for the second straight year.

The first Emmy Award of the night has gone to Tony Shalhoub for best supporting actor in a comedy. Shalhoub took his fourth Emmy on Sunday night at the Microsoft Theater for his role on Amazon’s The Marvelous Mrs. Maisel.

Homer Simpson was about to host the Emmys, until a piano got in the way.

Homer Simpson took the stage at the Microsoft Theater to open the host-less Emmys telecast on Sunday, and as he called it an honour he was smashed by an animated grand piano.