Home / Entertainment / Bollywood / Did Deepika Padukone just reveal her Chhapaak look? Ranveer Singh is already all over it

Did Deepika Padukone just reveal her Chhapaak look? Ranveer Singh is already all over it

Deepika Padukone has shared a new picture on Instagram, presumably from the sets of Chhapaak, her new film, being directed by Raazi’s Meghna Gulzar. Her husband, Ranveer Singh, has already left a comment.

Deepika Padukone has shared a new picture on Instagram, presumably from the set of her upcoming film, Chhapaak. She captioned the image with a clap board emoji and the hashtag, ‘BTS’.

Deepika is seen wearing a simple sweater; her sleeves are rolled up and she has several open books in front of her. Her hair is tied in a bun and she has a smile on her face. Chhapaak is the true story of acid attack survivor Laxmi Agarwal, and is currently in production under the direction of Meghna Gulzar. The film marks Deepika’s first project since her career-defining performance in Padmaavat, and her first film as producer.

Meghna announced that Chhapaak had commenced production recently with an Instagram image of a yellow dupatta with acid stains. She said that Deepika will be seen in heavy makeup in the film. Speaking at a Chennai event, she said, “You won’t be seeing Deepika, you know. You will be seeing a disfigured Deepika. There is an uncanny similarity between the survivor and Deepika.”

Laxmi has nothing but admiration for Deepika. She told Hindustan Times in an interview, “I am so happy that Deepika is playing the role. I have no right to judge her. How can I judge someone for something which I can’t do. She has played wonderful characters on screen and I believe she will give her best.”

Meghna has said that casting Deepika in the role was serendipitous. In a note written for the actor’s website, Meghna said, “It was a moment of serendipity when I asked for a meeting with Deepika. I had had many conversations with myself that she just may not be interested in doing the kind of film that I was taking to her. And she wasn’t.” 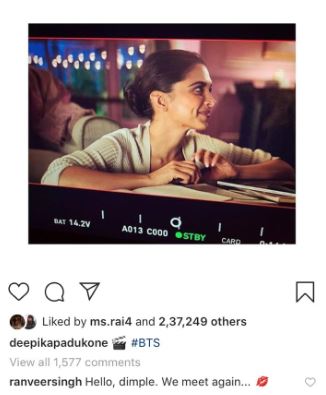 Deepika and her husband, actor Ranveer Singh, have been two of the most visible actors in recent months, with Ranveer delivering back-to-back hits in Simmba and Gully Boy, released shortly after their secretive, but highly publicised wedding in Italy in November. Ranveer commented on the post, writing, “Hello dimple, we meet again.”