Pulkit Samrat made prawn curry for girlfriend Kriti Kharbanda, a picture of which she shared on social media.

Amid the nationwide lockdown due to the outbreak of coronavirus in the country, Bollywood celebrities have been flaunting their culinary skills on social media. Actor Pulkit Samrat treated his actor-girlfriend Kriti Kharbanda to some prawns.

Kriti took to Instagram, where she shared a photograph of the prawn curry made by Pulkit and she captioned it: "And then, death by amaze food happened! @pulkitamrat showing off his cooking skills." 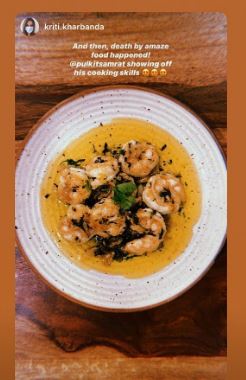 Recently, Kriti shared a post where she could be seen enjoying a champi (oil massage on the head) by her boyfriend Pulkit Samrat. She also jokingly claimed that her new motto in life is to make Pulkit give her a champi!

Meanwhile Pulkit took to Instagram and posted a black and white picture of himself along with his dog -- a husky. "Ek Dooje Ke Liye (for each other)" he captioned the image.

Kriti Kharbanda gets oil massage from boyfriend Pulkit Samrat: ‘I made him look like Champak, then give me a champi’
trending topics
Coronavirus LiveCovid-19 Cases IndiaCOVID-19 State TallyCovid-1983PM ModiBihar COVID-19 Cases