Priyanka Chopra and Nick Jonas are back in Delhi after attending the Oscars After Party in Los Angeles. See their new picture here.

Priyanka Chopra and her husband, American singer Nick Jonas are definitely among the most fancied couples globally. Together, they spell glamour like nobody else. After stunning fans with their appearance at the Oscars After Party, the couple reached Delhi on Tuesday. Priyanka took to Instagram to share a new picture of them together and wrote: “Best travel buddy ever..hello Delhi.. so good to be back. @nickjonas.”

Best travel buddy ever..hello Delhi.. so good to be back.. ❤️🇮🇳💋 @nickjonas

Looking great as usual, she mentioned how Nick was her best travel companion and that they were in Delhi. It is not clear what brings the two to Delhi; it could be her shoot for Shonali Bose’s The Sky is Pink or some other work. Looks like their friends in Los Angeles are missing them already; actor Elizabeth Chambers reacting to the post, wrote in the comments: “Love, but back to LA soon pls!” 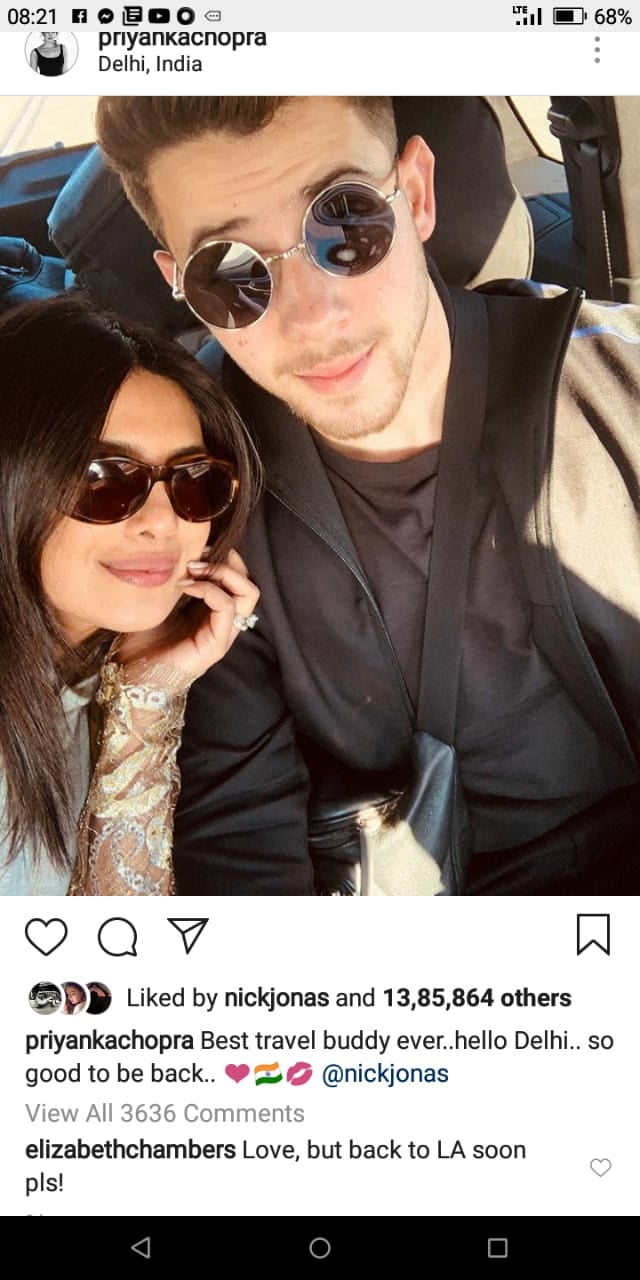 It may be recalled that at the Oscars After Party, the couple were enjoying the limelight. Their ‘sticking-out-the-tongue-at-each-other’ act got a fair degree of attention. They obviously are very comfortable in each other’s company.

Moreover, Priyanka looked spectacular in a back-less black sheer gown, so much so that when her make up artist Pati Dubroff put up her picture, Miley Cyrus commented: “Pretty love”.

It may be recalled that Miley is rumoured to have dated Nick in the past and is now married to Liam Hemsworth. Another noticeable fact was that Priyanka seem to missing the pre-wedding bash of Akash Ambani in Switzerland. Much of Bollywood, including Shah Rukh Khan, Aishwarya Bachchan, her husband Abhishek, Ranbir Kapoor, Alia Bhatt, Karan Johar and Jacqueline Fernandez are among the big names who have already reached the Alpine nation for the pre-wedding festivities of Akash Ambani and Shloka Mehta.