A year ahead of elections to Delhi’s municipal corporations, the Aam Aadmi Party (AAP) on Wednesday won four out of five wards in civic bypolls held on February 28, while the Congress bagged one seat, and the Bharatiya Janata Party (BJP), which has been the ruling party in the three MCDs for 14 years now, drew a blank.

Delhi chief minister and Aam Aadmi Party (AAP) national convener Arvind Kejriwal said the result were a positive message for his party ahead of the 2022 contest. “The results show that the people of Delhi trust the AAP’s model of good governance,” he said, before accusing the BJP of corruption and misgovernance in the three municipal bodies.

In terms of overall vote share, the AAP got 46.1% of the total votes cast. The Congress and the BJP got 27.29% and 21.84% respectively, according to election commission data. 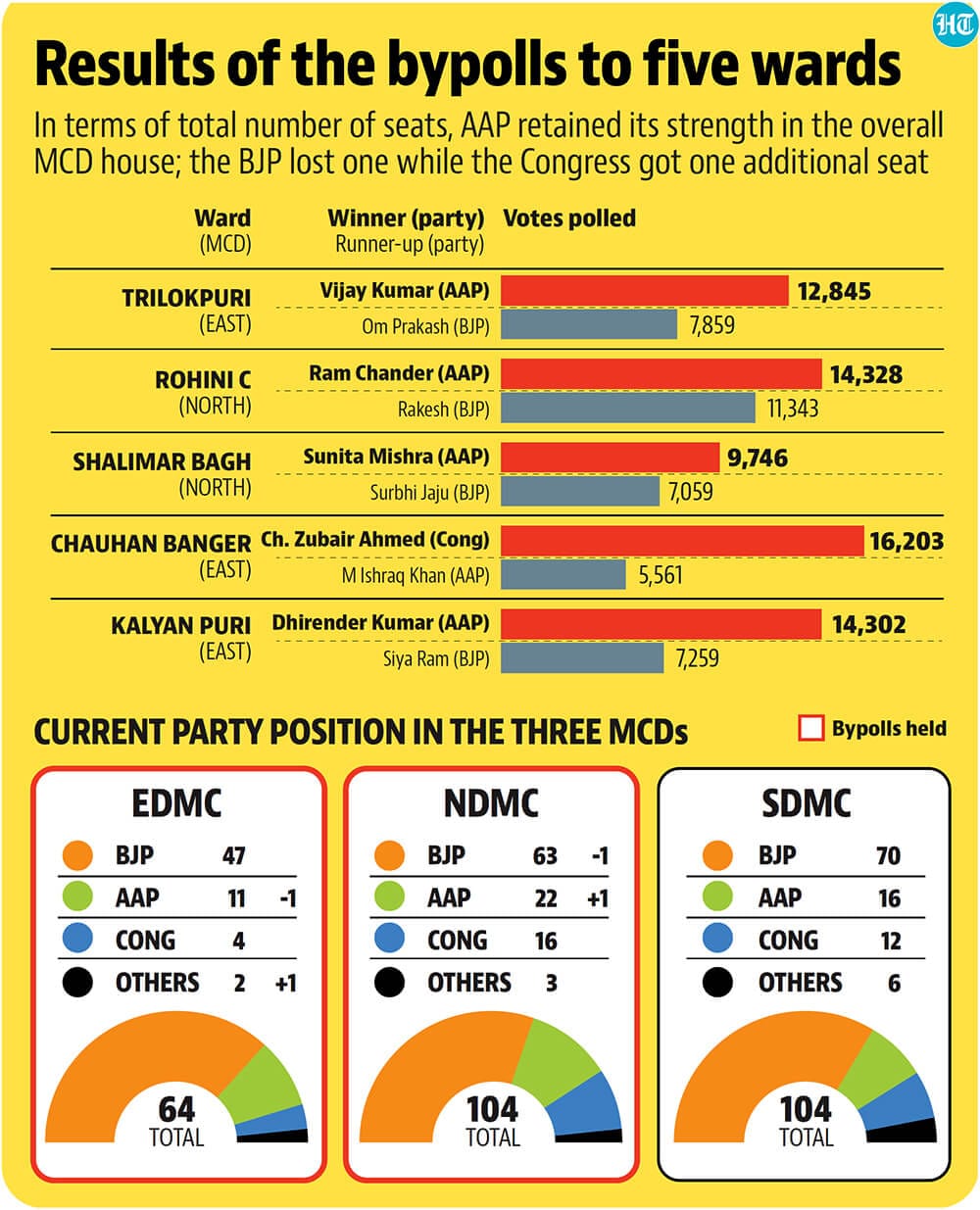 Out of the five seats that went to bypolls on February 28, AAP retained three seats that it had won in the 2017 municipal polls, and gained one from the BJP, while losing one to the Congress.

The bypoll results are a blow to the BJP -- the party lost all seats with margins varying from 2,700 to 7,000 votes, which are significant given the sizes of wards, indicating the people’s dissatisfaction with the performance of the civic bodies.

The AAP, however, lost Chauhan Banger ward (one of the few wards with a large Muslim population) in east Delhi to the Congress by a margin of 10,642 votes.

The five seats fell vacant after four councillors won the assembly elections in 2020 representing the AAP, and one -- Renu Jaju, former BJP councillor from the Shalimar Bagh ward -- died two years ago.

During its bypolls campaign, AAP had hit out at the BJP for corruption, mismanagement and flawed policies, which, it alleged, has landed the corporations in a crisis. The BJP, on the other hand, was blaming the ruling party in the Capital for paralysing the corporations by not giving funds on time.

“The BJP should resign from the municipal bodies after this miserable defeat and let the municipal polls happen in Delhi right now. People have lost their trust in the BJP. They believe that only the AAP can bring a positive change in the municipal corporations,” AAP’s incharge of municipal affairs Durgesh Pathak said on Wednesday.

Accepting defeat in the bypolls, Delhi BJP chief Adesh Gupta said: “We accept the people’s verdict. But this is not the end. We will analyse the results and see where we went wrong. We still have a lot of time to prepare for the municipal polls.”

While the Congress won just one seat, Chauhan Banger, the party’s vote share improved as compared to the 2020 assembly polls. Delhi Congress chief Anil Chaudhary said: “The impressive show by Congress in the by-elections and the victory in Chauhan Banger ward has raised the party’s overall vote share from 6% (in the last Assembly elections) to 22% now.”

Rahul Verma, a fellow with the Centre for Policy Research, said, “In terms of overall figures, the AAP was in power in four of these five municipal seats, and they will continue to be in power in four. It has lost one seat and gained one. There is not much difference as far as the numbers are concerned. However, I would still say the party has much better prospects in the 2022 municipal polls. They have won the assembly polls with a huge majority for two terms now and the party machinery has strengthened at the grassroots level.”

Tanvir Aeijaz, associate professor in the department of political science at Ramjas College, said, “These are local elections where the candidate matters a lot. In these elections, local issues are of real importance. People have seen and benefitted from AAP’s model of governance. The bypoll result indicates that people are happy with it.”