Delhi recorded 8,506 new cases of Covid-19 on Friday, the lowest since April 10, with a nearly four-week long lockdown in the Capital finally bringing its overburdened health infrastructure some breathing room , although ICUs remain mostly full.

The city’s test positivity rate too fell to 12.4%, the lowest since April 11, suggesting that the outbreak is receding after a punishing surge that began in mid-April and abated only in recent days.

There were 289 more deaths due to Covid-19 on Friday, the government’s health bulletin showed.

“Delhi has recorded fewer than 10,000 cases in the last 24 hours. This has been possible only due to a strict lockdown and the discipline of the people in Delhi. For now, we must remember not to let our guard down,” chief minister Arvind Kejriwal said on Friday. The current lockdown ends on May 17, but it will likely be extended.

Average daily cases have now fallen by roughly 40% compared to two weeks before, with the test positivity rate reducing by roughly 12.74 percentage points. At its worst, the outbreak led to 28,395 new cases on April 20 and the positivity rate touched a record 36% on April 22. 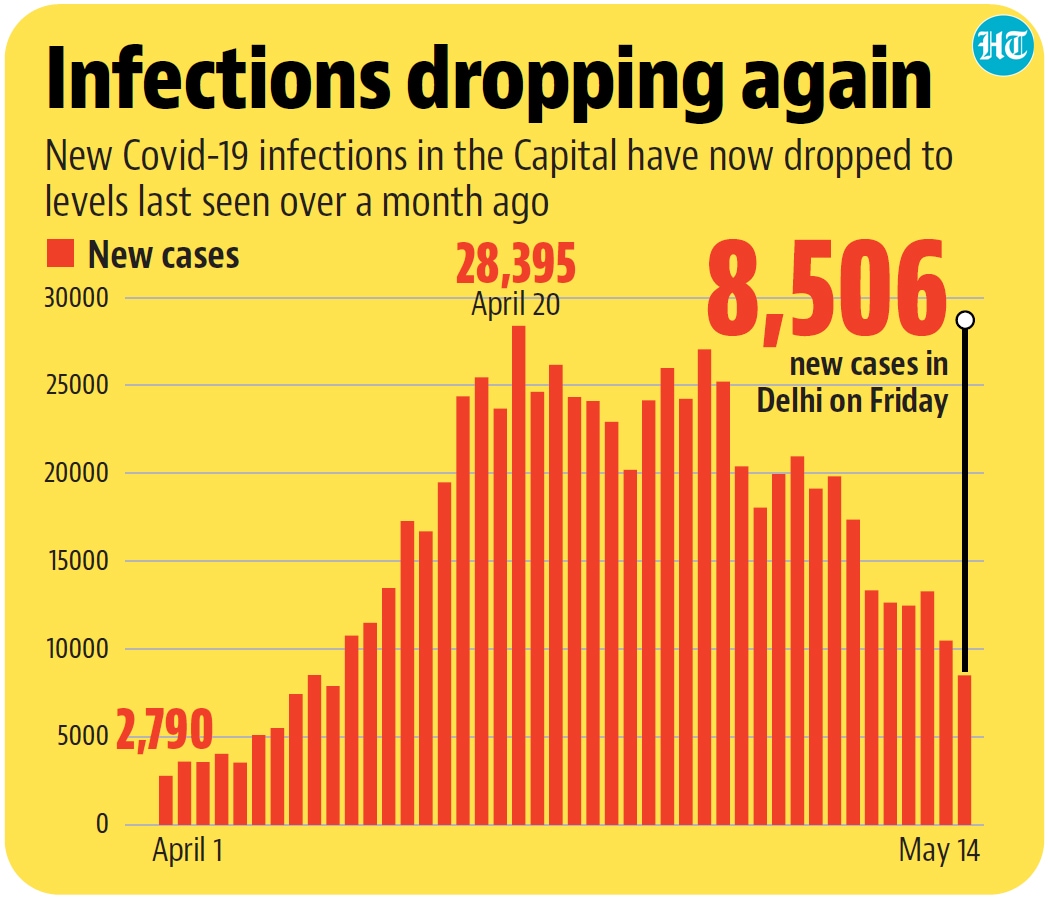 The crisis stretched the city’s hospitals to breaking point, and triggered a severe shortage for medical oxygen that came into focus on April 22 and would not be resolved until at least May 5, when the Capital finally received over 700MT of stocks in a day after a long-drawn battle between the state and the Centre, which also played out in the high court and the Supreme Court.

“There has been a consistent decline in the number of cases and positivity rate for a few days now; Delhi has certainly crossed the peak. Now, even if the government does remove the lockdown, I do not think that the numbers will go up drastically. This is because the infection is following its natural course, with a large chunk of the population already having been exposed to it,” said Dr Jugal Kishore, head of the department of community medicine at Safdarjung hospital.

The government, he added, must now focus on strengthening its own systems rather than creating makeshift facilities.

Concerns over reopening are also in focus due to new clues surrounding the B.1.617 variant, which has led experts in western countries such as the UK to urge the government there to defer plans to lift the lockdown.

Experts have identified surge vaccinations as one of the few ways the threat from the variant can be tackled without having to stay locked down, but Delhi – as well as large parts of India – have faced a shortage of doses, slowing down the pace of vaccinations. The Capital has so far delivered 4.4 million doses -- 1 million people have received have received both doses --- to its roughly 15 million people over the age of 18.

Kishore added that the government must now focus its vaccine strategy on the vulnerable. “The people who have had an infection now are more or less protected from a second one for now. So, we should target those who haven’t had an infection and immunise them first,” he said.