Home / Elections / Delhi Assembly Election 2020: Why Delhi is a difficult terrain for the BJP

Delhi Assembly Election 2020: Why Delhi is a difficult terrain for the BJP

Number Theory: Statistics suggest that the BJP should be a clear favourite in the Feb 8 Delhi assembly election. Yet, it is being seen as an underdog in Delhi polls.

Delhi will vote to elect a new assembly on 8 February, with anecdotal reports suggesting a bipolar contest between the Aam Aadmi Party (AAP) and the Bharatiya Janata Party (BJP). The BJP won all seven Lok Sabha seats in the national capital in the 2019 elections. Its overall vote share was an overwhelming 57%. The AAP, in fact, finished third in terms of vote share. The BJP also controls all three municipal corporations in Delhi. These polls were held in 2017, when the AAP was already in power. Having spent a full term in office, the AAP should also be facing the headwinds of anti-incumbency.

These statistics should have made the BJP a clear favourite in the elections. Yet, it is being seen as the underdog. Its chances of edging past the AAP will largely depend on whether or not there is a consolidation of what the party thinks is a silent majority against the Shaheen Bagh protest. The sit-in led by women in this south-east Delhi neighbourhood has become the mascot of protests against the Citizenship (Amendment) Act, or CAA. The BJP has been branding all opposition to the CAA as being against national interest per se.

Why is the BJP not being seen as the clear favourite in the Delhi polls?

Also Watch l Delhi Election 2020: What is at stake for AAP, BJP & Congress

There are two main factors which explain this. First is Delhi’s relative opulence vis-à-vis the rest of India. This makes the Narendra Modi government’s flagship welfare schemes a bit ineffective in Delhi. Second is the AAP’s conscious strategy of positioning itself as a purely governing and not an ideological alternative to the BJP’s Hindutva politics.

Let us look at them one by one.

Delhi, compared to other Hindi belt states, does not have a significant number of people who live in abject poverty. According to the 2015-16 National Family and Health Survey (NFHS), the share of households belonging to the lowest wealth quintile – lowest 20% of the population of India – is much less in Delhi than in other states, just 0.2%.

This also means that the share of people who would have benefitted from the flagship welfare programmes launched by the Modi government is much lower in Delhi. For example, under the Pradhan Mantri Ujjwala Yojana which provides free cooking gas connections to women in poor households, 77,000 connections were released in Delhi, which is just 2.2% of the number of households in the city-state, as per the 2011 Census. This is the lowest share of beneficiaries among all big states. This constituency of extremely poor voters, who have also gained directly from the BJP’s welfare push in the last five years, has been an important pillar of the BJP’s electoral strategy in the past few years. (see https://bit.ly/2UnmwGX for a discussion in the context of Maharashtra)

Because of Delhi’s unique economic position, there is a natural limit to this constituency.

The AAP, on the other hand, is banking on gains from its own popular welfare model. The schemes include zero water bill up to 20,000 litres of monthly consumption, zero electricity bill up to 200 units of monthly consumption; and subsidies for those who consume up to 400 units; improvements in government schools and hospitals and opening of Mohalla clinics, free travel in DTC buses for women, caps on fee hike in private schools, etc. While most of these schemes are more likely to benefit the non-rich, they do not explicitly exclude the rich from availing of these benefits. The other benefit which AAP’s welfare initiatives offer is that they work on self-selection, and therefore, are as easy for migrants as for others. Targeted welfare schemes are less likely to benefit migrants, as they find it difficult to navigate local administration structures which certify eligibility for such benefits.

This multi-class welfare push, along with claims of corruption-free governance, is the main political pitch of the AAP to the Delhi voter. And, as of now, there is no allegation of corruption against the AAP government, which has caught popular imagination. The biggest proof of this is that no such thing features in the BJP’s campaign narrative. Also, a large part of this push is identified with Arvind Kejriwal himself, as is the case with Narendra Modi at the level of the Centre. This has given AAP an extra bit of advantage.

There is another set of statistics which makes Delhi elections a very interesting affair. AAP’s support base seems to be made up of an extremely mobile set of voters, who are not hesitant to jump ship to not just the BJP, but also the Congress. AAP’s 2015 victory would not have been possible without a section of both Congress and BJP voters changing loyalties. Similarly, its complete collapse in 2019 is a result of the 2015 base deserting it for both the BJP and the Congress. While the Hindu consolidation behind the BJP is widely acknowledged, it is worth pointing out that the Muslim vote in Delhi consolidated in favour of the Congress rather than the AAP in the 2019 Lok Sabha elections. This is best understood by an analysis of six assembly constituencies (ACs), which have seen at least one Muslim candidate from the Congress, BJP or AAP in the 2013 and 2015 assembly elections. These are Matia Mahal, Ballimaran, Okhla, Seelampur, Babarpur and Mustafabad. The AAP’s vote share in these six ACs rose from just 17% in 2013 assembly elections to 39% in the 2014 Lok Sabha polls and then to 52% in the 2015 assembly elections. But the party polled just 13% votes in the 2019 Lok Sabha election while the Congress party’s vote share rose by 28 percentage points to 47%. Votes from these six ACs contributed 18% of the total votes received by the Congress in Delhi in the 2019 polls, the highest for the party since 2008 (comparison to previous elections is not possible because a delimitation exercise changed constituency boundaries). 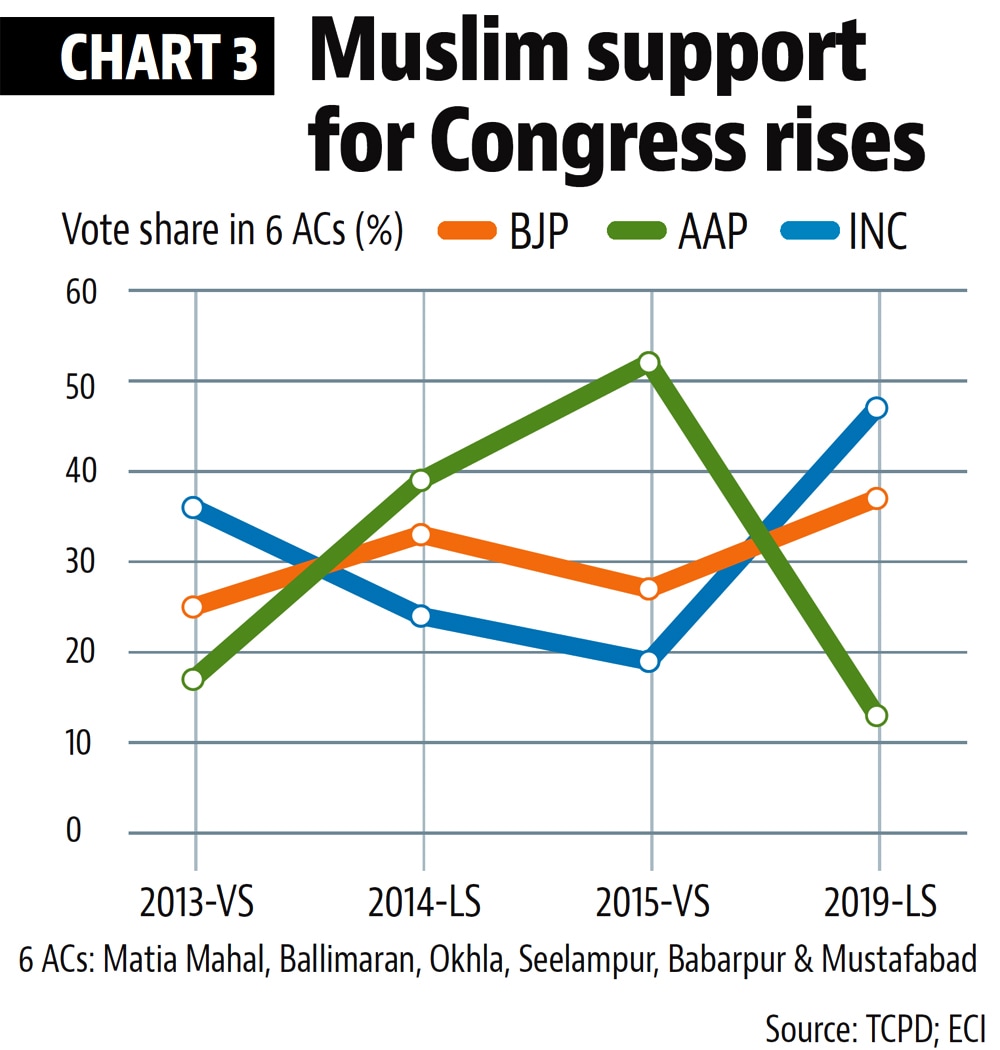 To be sure, the BJP managed to get 37% votes in these ACs in 2019. That these ACs comprise of both Muslim- and Hindu-dominated areas can explain this. For instance, even as the Congress won Matia Mahal AC in 2019 with 65% vote share, the BJP has a majority vote share in 120 of the 251 booths in this AC.

That the Muslim voter is willing to desert the AAP for the Congress shows that the AAP is still not seen as the established “secular” alternative. This could actually be a conscious choice which the AAP has made. After the drubbing it received in the municipal elections in 2017, the AAP has steered clear of explicitly trying to champion the ideological positions against the BJP. It has supported decisions such as abrogation of Article 370 and no major AAP leader has physically participated in the protests in Jawaharlal Nehru University or Shaheen Bagh recently. This might have allowed the AAP to insure itself against the BJP’s ideological attack, which could have driven away pro-BJP voters from the AAP. The Muslim voter, in this case, might not be willing to vote for the Congress, which is not even being seen as a contender in these elections.

The BJP, thanks to the opportunity which the debate around CAA has given it, has been pushing the AAP to shed its perceived neutrality and adopt a critical stance vis-à-vis those who are opposing the BJP’s ideological push. In doing this it is hoping to break away a section of not just Hindu voters of the AAP but also alienate Muslims, who might chose to desert a party which does not care about what has perhaps become the biggest political issue for Muslims in many decades.

Delhi, as a city-state, is not comparable to the rest of India both in terms of demography and resources. Yet, the 2019 Delhi results offer an important political insight. If the AAP retains power in a comprehensive manner, it will mean that a governance driven, ideologically agonistic brand of politics can hope to counter the BJP. If the BJP manages to stage an upset or even come close to it, AAP’s tactics of non-engagement with core-Hindutva is bound to be questioned.