Spotted! Aamir Khan's son Azad on the sets of P.K.

Just a couple of days back, we saw pictures of Aamir Khan dressed in beige jacket and a ghagra on sets of PK. Now we came across an image of Aamir's little boy...
PIC INSIDE

Just a couple of days back, we saw images of Aamir Khan dressed in beige jacket and a ghagra on sets of P.K. Now we came across an image of Aamir's little bundle of joy, baby Azad, on the sets of papa dearest's film.

Currently being shot in Rajasthan, the schedule will last for two months. Anushka will join the team later in February. Apparently, she plays an alcoholic in the film.

P.K. is said to be a political satire about God and godmen. Directed by Rajkumar Hirani, the film also features Sanjay Dutt in a prominent role.

By now its common knowledge that Aamir Khan has begun shooting for Rajkumar Hirani's P.K. in Rajasthan. However, what took us by surprise was Aamir's get-up! Aamir is seen wearing a blazer along with a ghagra (something we've never seen anybody wear as yet). Wonder what is the significance of this particular look? 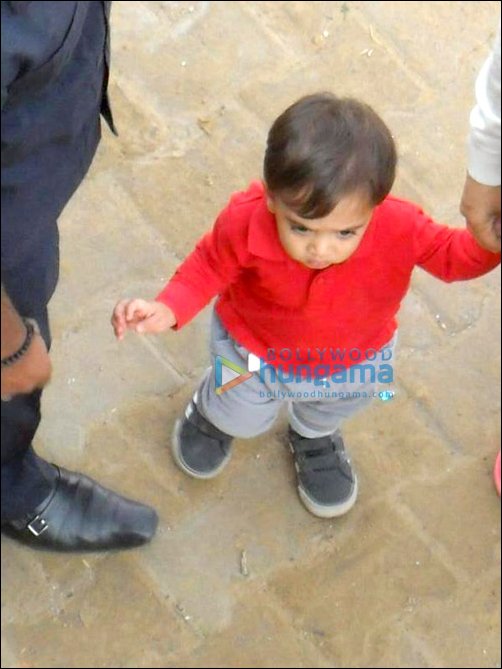 Aamir takes Kiran, son along for P.K. shoot
Bollywood star Aamir Khan Friday began shooting for his new film Peekay in Rajasthan and the actor made it a point to take his wife Kiran and son Azad along with him.

Aamir has a 45-day shooting schedule lined up in Rajasthan and he couldn't afford to spend that long a time apart from his family. So he decided to take them along with him, said a source. READ STORY

Sanjay Dutt to play Rajasthani in PK
Sanjay Dutt, who has a small but important role in Rajkumar Hirani's P.K., will be seen playing a Rajasthani in the film. The role was initially offered to Arshad Warsi who had to opt out due to date issues.

"I am very excited to be working with Raju Hirani and Aamir Khan. We will start shooting for the film in February. I hope we try to make a better film than 3 Idiots for the audience," Anushka told reporters during the launch of Femina India's 10 Most Beautiful Women. FULL STORY