Sanctioned by the government in 2009, the Mk II will be equipped with state-of-the-art AESA radar with the indigenously developed air-to-air missile Astra, which has a range of 70km. The beyond visual range missile is currently being tested on the IAF’s Su-30 MKI fighters.

The Aeronautical Development Agency (ADA) of the Defence Research and Development Organisation (DRDO) will unveil the Tejas Mark II with a heavier stand-off weapon capacity in the 75th year of India’s independence, in 2022, and the long-awaited indigenous fighter, which will be manufactured by the state-owned Hindustan Aeronautics Ltd (HAL), will go into production by 2025-2026, two senior defence officials said on condition of anonymity.

DRDO’s ADA finalised the design of the 17.5 ton Tejas Mark II (Mk-II) in December 2018, and is expected to lock in the design of the fifth generation twin-engine stealth fighter for Indian Air Force (IAF) by the end of the year. ADA officials said the Mk II will have the same weight as the Mirage, Jaguar and Grippen but with a heavier GE 414 engine. The qualitative requirements were frozen in late 2018, in full consultation and with the approval of the IAF, two years after the project was redesigned. The 4.5 generation fighter will go into production after the Tejas LCA (light combat aircraft) order of 123 aircraft to replace the air force’s ageing MiG-21s is completed. 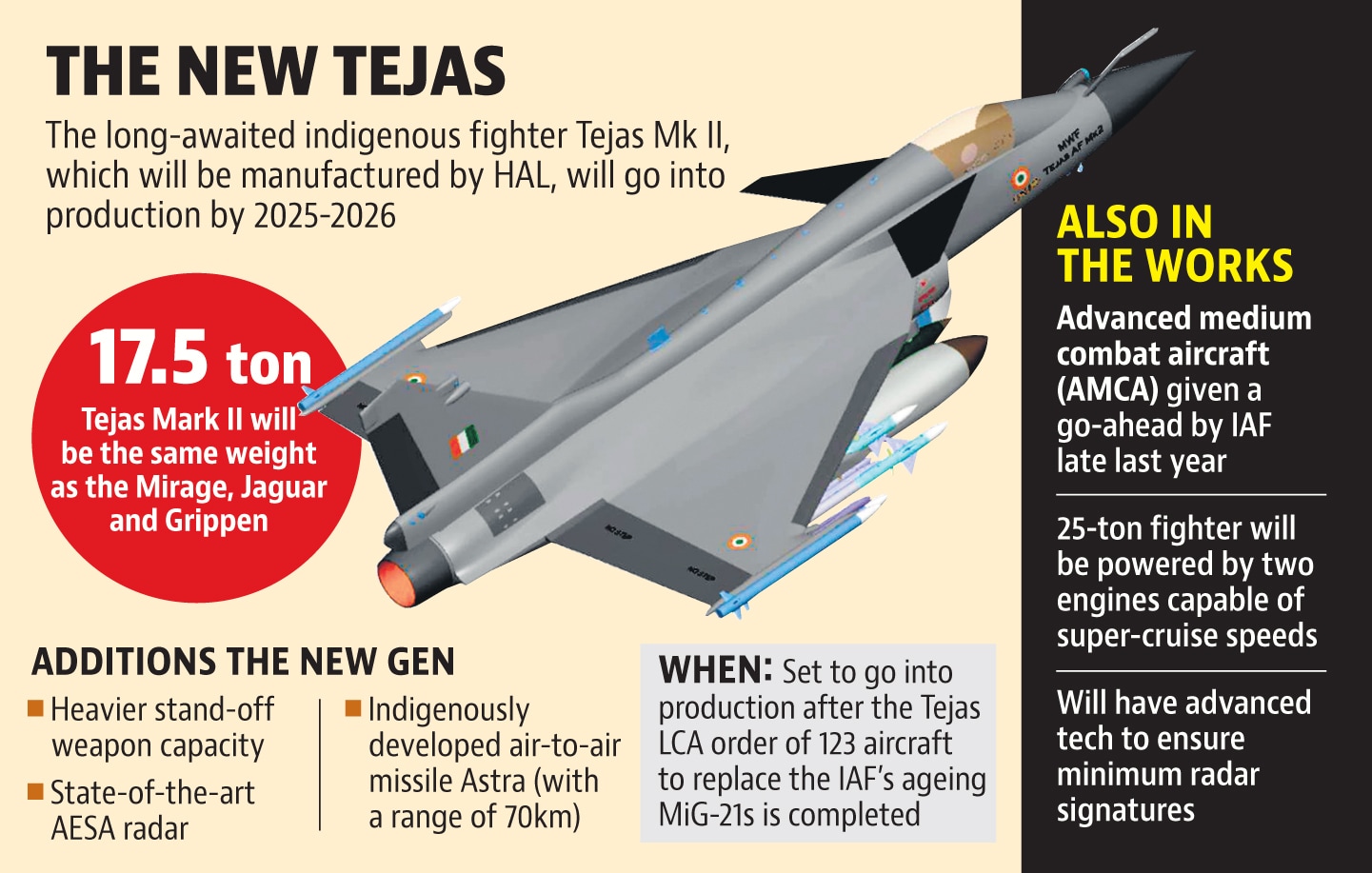 Sanctioned by the government in 2009, the Mk II will be equipped with state-of-the-art AESA radar with the indigenously developed air-to-air missile Astra, which has a range of 70km. The beyond visual range missile is currently being tested on the IAF’s Su-30 MKI fighters.

ADA and IAF are also moving rapidly on the development of the advanced medium combat aircraft (AMCA). The 25-ton fighter will have all weapons in its belly and be powered by two engines capable of super-cruise speeds. AMCA will have complex S-shaped serpentine intakes. These hide the spinning turbine blades in the engine and are a key stealth feature. The super cruise feature allows the aircraft to accelerate without the use of after burners. Both features ensure minimum radar signatures.

According to top DRDO officials who asked not to be named, the design of AMCA, which was approved as an initial concept in 2014, has been given a go-ahead by IAF late last year. In consultation with the air force, the design of the twin engine fighter will be frozen by the end of the year. This, too, will be made by HAL.

The Tejas will be lightest member of the family; the LCA weighs just around 11 tonnes.

Designed as a fifth-generation stealth fighter using composite material, the AMCA will be unveiled by ADA in 2024. With a weight equivalent to the F-18 fighter, AMCA will be powered with a new engine, the search for which has already started.