Polling in the second phase of urban local bodies’ elections, covering more than 380 local bodies spread over 13 districts of Jammu and Kashmir, is being held on Wednesday..This phase covers 384 wards (166 in Kashmir and 218 in Jammu) spanning six districts in Jammu and seven in the Valley and has 1,094 candidates in the fray. Of these, 65 candidates, including 61 in Kashmir, have won the polls uncontested. No polling will take place at 56 wards in the Valley as no nomination was received.The polling time for the second phase has been increased by one hour. It began at 6 am and will continue till 4 pm.The elections, being held in four phases, began on October 8 and will end on October 16. Separatists have asked people to observe a shutdown in the areas going to polls in second phase in these “sham elections”. Two main regional parties, the National Conference and the Peoples Democratic Party, have boycotted the polls. The first phase on Monday saw a voter turnout of 8.3% in the Kashmir Valley, while more than 65% of the electorate voted in the Jammu and Ladakh divisions. Kathua deputy commissioner, Rohit Khajuria, however, said tight security arrangements have been made and central forces stationed at polling stations to help carry out free and fair polls. “We are hopeful of a good voter turnout in a peaceful atmosphere,” he said.Here are the highlights:

Municipal elections being held in J-K after 13 years

Municipal elections in Jammu and Kashmir are being held after 13 years.

Two lone candidates declared elected unopposed in Kulgam and Badgam districts. With this, the poll process in these two districts of the Kashmir ended on Wednesday.

The Jammu division saw brisk polling but the voting percentage remained in single digit in the Kashmir Valley except for Bandipora district, during the first four hours. Bandipora recorded 22% voting till 12 noon compared to 63% in Ramban. 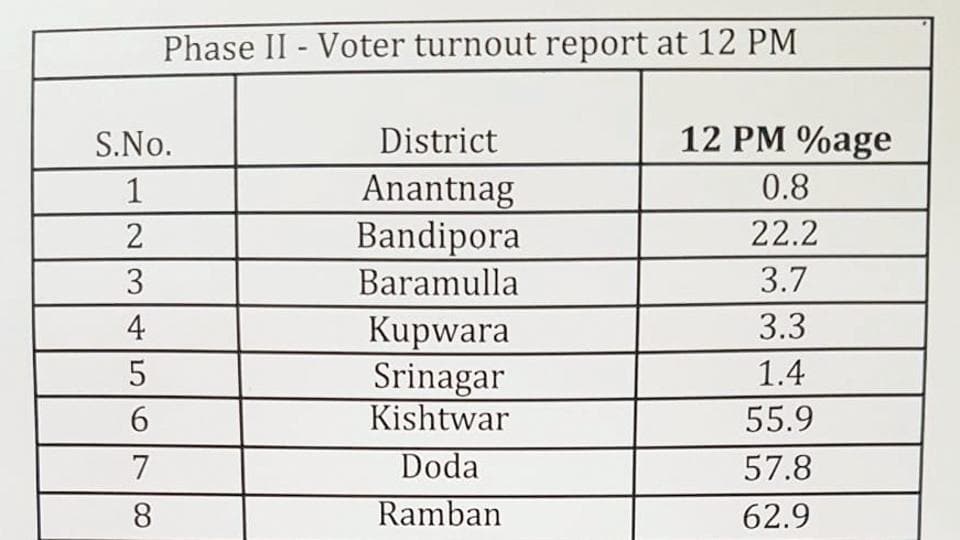 #JammuAndKashmir: Former terrorist Farooq Ahmad Khan, who is contesting local body election on a BJP ticket, cast his vote at a polling station in Srinagar. pic.twitter.com/LMXuFDqhak

“Our security arrangements are robust. Voting process is going on very well. Voters are feeling safe. People are coming out in large numbers to cast their vote”: SSP Bandipora Zulfikar Azad on voting for the second phase of local body elections in J-K

#JammuAndKashmir: Voter turnout recorded till 10 am in the second phase of local body elections in the state. pic.twitter.com/OAc5FNq6Ag

Low polling percentage in Kashmir Valley, 0.2% voter turnout in Srinagar till 8an

#JammuAndKashmir: Voter turnout recorded till 8 am in the second phase of local body elections in the state. pic.twitter.com/RfWjVm9rBM

BJP candidate from ward no. 2 of Ramban, Azad Singh, died due to cardiac arrest early on Wednesday morning following which polling was cancelled in the ward.

61 candidates in fray for 18 seats in Ramban district

There are 61 candidates in the fray for contesting for 18 seats in Ramban district.

Till 8 am, 14 percent polling was reported from Ramban,Batote and Banihal districts of Jammu. Three candidates belonging to Congress party were already elected unopposed in Banihal.

People queue up to vote in Udhampur

#JammuAndKashmir: People queue up outside a polling booth in Udhampur to cast their votes for the second phase of local body elections. pic.twitter.com/15Sy9VXxC7

The first phase of urban local bodies elections in the state on Monday drew tepid response in Kashmir Valley and saw a low voter turnout of 8.3%.

Voting in progress at a polling booth in Srinagar

#JammuAndKashmir: Voting for the second phase of local body elections is underway in 13 districts of the state. Visuals from a polling booth in Srinagar's Lawaypora. pic.twitter.com/kIii52avFS

Voting underway in 13 districts of #JammuAndKashmir in the second phase of urban local bodies elections; #visuals from a polling station in Reasi pic.twitter.com/CpRO7ZFFow

Separatists have asked people to observe a shutdown in the areas going to polls in second phase in these “sham elections”. Joint Resistance Leadership, comprising Syed Ali Shah Geelani, Mirwaiz Umar Farooq, and Mohammad Yasin Malik, in a statement, said, “People will show their total disconnect and dismissal by staying away and boycotting this drama.”

Voters began arriving at polling booths since early morning to cast their votes in the second phase of urban bodies elections in Jammu and Kashmir.