With food inflation hitting 14% in December 2019 and real rural wages declining for eight consecutive months (latest data available till October), rural India is among the worst hit by the current economic slowdown. Providing relief to this constituency will take more than just allocating money in the budget. This is because the two flagship rural relief programmes are caught in multiple structural problems. Currently, two of the Government of India’s (GoI) largest schemes focussed on reviving the rural economy have been the Mahatma Gandhi National Rural Employment Guarantee Scheme (MGNREGS) and the Pradhan Mantri Kisan Samman Nidhi (PM-KISAN). Together, these schemes account for nearly 1% of the total GDP. While the former is still struggling to achieve its stated objective of providing employment on demand for 100 days, the latter seems to have lost momentum after the Lok Sabha elections.

Financial Year 2018-19 marked the highest ever allocations to MGNREGS (a scheme that guarantees 100 days of work to any rural household that demands it) at Rs 61,084 crore. Another Rs 60,000 crore was added in last year’s budget. With total GoI releases already crossing allocations by January 30, 2020, it is likely that the Revised Estimates (RE) for FY 2019-20 will be higher.

Similarly, in February last year, just a few weeks before polling began in the Lok Sabha elections, GoI announced the PM-KISAN scheme – a minimum income support scheme for landholding farmers giving Rs 6,000 per annum. By March 2019, 47.4 million farmers were registered under the scheme and over Rs 16,000 crore was disbursed. Allocations were further increased to a whopping Rs 75,000 crore last year.

One year later, however, both seem to be struggling to keep up with the accelerating economic crisis.

Under PM-KISAN, after the initial fanfare, both registration of farmers and release of funds has slowed down. As per the scheme design, Rs 6,000 is transferred in three instalments of Rs 2,000 every four months. Till now, the scheme has covered four periods: December 2018 to March 2019, April to July 2019, August to November 2019, and December 2019 to March 2020.

Coverage under the scheme has been less than optimal. As per RTI data accessed by the Accountability Initiative at the Centre for Policy Research, 90.1 million or only 64% of the anticipated 140 million farmers were registered till November 2019. Transfer of benefits and, as a result of expenditure, has been even slower. Eighty-nine per cent of farmers registered in the first period (till March 2019) received their first instalment. However, for, the 11.9 million farmers registered in the period from August-November 2019, only 62% received their initial tranche till them.

Structurally, PM-KISAN suffers from three main implementation hurdles. First, the scheme’s impact is limited to improving consumption and providing a safety net solely to landowning farmer families. It, thus, does not include vulnerable tenant farmers or agricultural workers. As per Census 2011, there were 144.3 million landless agricultural labourers in the country. Similarly, data from the NSSO in 2013 found that 14% of land was leased to tenants across the country with state variations from as high as 37% in Andhra Pradesh to as low as 6% in Madhya Pradesh.

The second key challenge lies in the identification of landowning farmers. The current estimates are based on the 2015-16 agriculture census, which measures the number of agricultural landholdings. Since the same land can be used by multiple family members and the same family can cultivate multiple pieces of land, this can result in estimation errors.

Last is, of course, the actual disbursement. In addition to the delays stated above, the changing instructions regarding mandatory seeding of Aadhaar has caused its own bottlenecks.

The implementation of MGNREGS has not fared much better. For one, while allocations have been rising or are at least at par, latest data available in M

GNREGS Portal shows that they remain lower than the anticipated demand. As on January 30, 2020, Rs 61,230 crore had already been spent with pending liabilities due mounting to Rs 7,153 crore. Several states have already breached the funds available to them. For instance, Rajasthan had exceeded the total funds available with it by Rs 685 crore; Odisha by Rs 222 crore; Gujarat by Rs 78 crore. 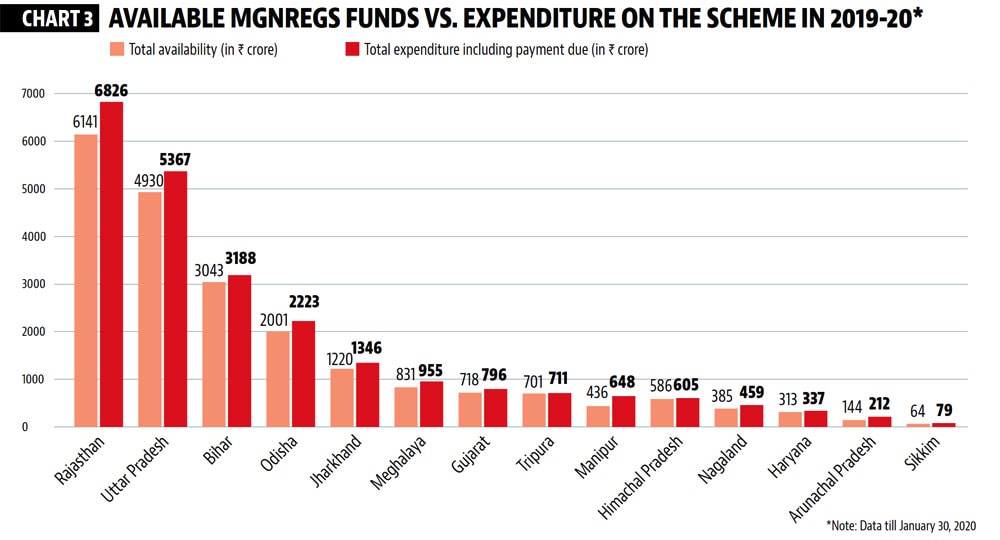 The year-on-year growth of average wage rates paid in states from FY 2018-19 has not seen a substantial increase over the years. For several states such as Bihar, Jharkhand, Uttar Pradesh and Arunachal Pradesh, the average wages did not change, and those for Sikkim, Rajasthan, Tripura and Gujarat actually declined. Accounting for inflation, (CPI-AL numbers taken from RBI database), real wages decline further. So what should the government do?

There is a strong case to be made to strengthen MGNREGS. The demand-driven nature of MGNREGS helps avoid the targeting failures seen in PM-KISAN and other schemes. Moreover, by covering a larger ambit of people it has the potential to boost incomes across all sectors of the rural economy. At the same time, however, there is little doubt that PM-KISAN can have an important immediate effect in delivering much needed cash directly into the hands of people.

Both, however, will require not only sufficient budgets but also structural improvements to increase coverage and implementation. Budget 2020 is going to have to make some tough calls. In the absence of a serious redress of the current implementation hurdles, the schemes could cause further disillusionment.