The employees’ state insurance scheme’s ‘revenue to social spending ratio’ has been consistently high, resulting in huge surpluses from premiums. Also, lower uptake by beneficiaries is another a key issue.

The employees’ state insurance (ESI) scheme, a vital social health security programme for workers, has been grappling with inefficiencies and shoddy services for years, data reviewed by Hindustan Times shows, despite a package of so-called second-generation reforms dubbed “ESIC 2.0” launched by Prime Minister Narendra Modi in 2015.

The scheme covering roughly 42% of the organised-sector employment is administered by the Employees’ State Insurance Corporation (ESIC), set up under an act of Parliament in 1948. It was launched from Kanpur in 1952 and counts India’s first prime minister Jawaharlal Nehru as its first insured person.

In a country that lacks universalised social security, ESIC is critical for low-wage workers.

The ESI law applies to factories or business units employing 10 or more people and employees with monthly salaries of up to Rs21,000 are eligible to be covered.

A deep-seated problem of the scheme is that its “revenue to social spending ratio” has been consistently high, resulting in huge surpluses from premiums. That means collections are consistently and significantly higher than its level of expenditure on social services, particularly healthcare.

Currently 32 million insured people, along with their families, are entitled to medical care on a network of 152 hospitals and 1,467 dispensaries. They also get cash benefits for wage losses due to sickness, disability or retrenchment.

An audit of ESIC by the comptroller and auditor general (CAG) had flagged the lower uptake by beneficiaries as a key issue in 2014. “Performance audit disclosed that ESIC was spending less on services to be provided to its insured persons and its collections were more, with the result that its accumulated surplus was consistently increasing,” the CAG audit report stated.

This means, even though more people are getting covered, fewer people have been able to utilise its services.

While data on ESIC is limited, there seems to be a “very low utilisation rate when compared with the National Sample Survey Office (NSSO) morbidity surveys for the general population”, according to Ravi Duggal, a public health expert.

Employees contribute 1.75% of their wages towards premiums, while the employers’ share is 4.75%.

The percentage of medical benefits availed to contribution has either remained stagnant or dipped. It was 52% in both 2014-15 and 2015-16 and then fell to 45% in 2016-17. This too points to lower spending on medical services.

All about social security
ESIC needs to improve its per capita spending and lower its surpluses, experts say
OVERALL MEDICAL EXPENDITURE: RISING BENEFITS VERSUS PREMIUMS
% of medical benefits to contribution 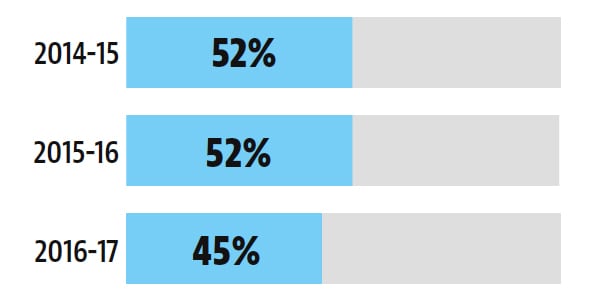 % of medical and cash benefits to contribution 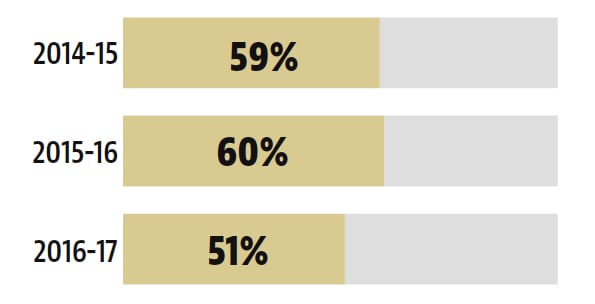 ESIC’s share of combined medical and cash benefits to premiums was better at 51% in 2016, meaning it was quicker on disbursing cash entitlements. Even so, this was a fall from 60% in the previous year. “The problem of deficient services is more in the northern and eastern states, such as Uttar Pradesh and Bihar,” an official requesting anonymity said.

“Our current surpluses are in the range of Rs3,500 to Rs4,000 crore. One problem is a 30-40% shortage of doctors and medical staff,” said Raj Kumar, director-general of ESIC.

Of this, Rs1,263 crore has been declared non-recoverable due to disputes or factory liquidation, according to a Lok Sabha reply.

“The basic fault lies in the very design of the scheme. While ESIC collects premiums, the medical services are delivered through state health departments. Letters have been regularly written to state health departments but hiccups remain,” said Rama Kant Bharadwaj, the vice president of Laghu Udyog Bharati, a small enterprise consortium. ESIC’s second-generation reforms are being fine-tuned to strengthen medical services, the official cited above said. ESIC is on course to draft in 3,000 private doctors’ clinics, but that is just a fraction of the shortfall.

Under its Vision 2020, it is setting up a string of hospitals, including a super-specialty hospital in Bhubaneswar and a 100-bed unit in Raigarh, Chhattisgarh. A major plan is to set up a network of dispensaries called modified employers’ utilisation dispensary in which employers will have a stake.