According to data shared by the Union ministry of health and family welfare on Thursday, a little over 66 million (66,161,004) of the population above 60 years of age has received their first dose so far.

The pace of vaccination among people above the age of 60 has fallen 75% from peak levels despite more than half the population in this age group yet to be administered even a single shot – igniting fears of vaccine hesitancy hampering the coverage of the population group most vulnerable to Covid-19.

According to data shared by the Union ministry of health and family welfare on Thursday, a little over 66 million (66,161,004) of the population above 60 years of age has received their first dose so far. Based on projections of population by the Census of India for 2021, there are an estimated 138 million people above 60. This means that around 52% of the country’s elderly are yet to receive a single shot – a massive proportion for an age group that has been eligible for shots for nearly four months now.

But the worrying aspect of this trend is the drop in the pace of vaccination in this age group. 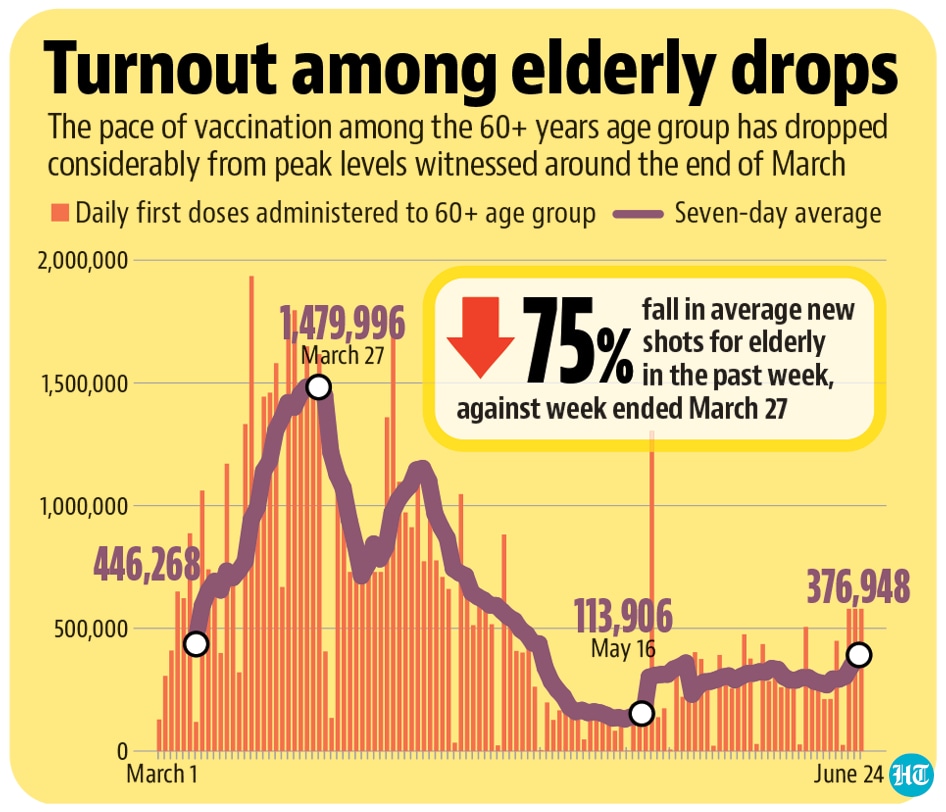 The seven-day average of first dose administration among elderly peaked for the week ending March 27, when 1.48 million people got their shots every day on average. Through April and May, as the drive progressed, the number of new people above the age of 60 years getting shots started dwindling. By mid-May, this number dropped to 113,906 shots a day on average (for the week ending May 16), the lowest ever. And while it has inched up slowly since then (376,948 people above the age of 60 have got their first shots in the past week), it remains 75% below peak levels.

Experts said vaccine hesitancy appears to be the main reason for this drop, as those who wanted to get their shots did so as soon as they could, but the remaining people appear to be staying away from vaccination centres. A rework of vaccination strategy may be needed to deal with this issue, they said.

“The rush definitely has gone down of the elderly and it is largely younger people that are coming to get vaccinated... If 50% or so are still left in this population group, then we really need to reassess our approach,” said Dr Anupam Sibal, group medical director, Apollo Hospitals. “Those among the elderly who have been left could either be those who cannot travel for some reason, or those who are hesitant to get jabbed. To manage this, requires a two-pronged strategy that includes providing vaccination at their doorstep for those who cannot travel, and to change the communication strategy to allay their concerns about safety,” he added.

Vaccine hesitancy and patchy supplies are the primary concerns that people involved in the vaccination process have had to deal with, and Union health ministry has been issuing advisories to look at ways through which hesitancy can be effectively dealt with.

“Certain challenges are foreseen that needs to be countered well in time. These may include the challenge of ensuring over 1.3 billion people in India receive factual and timely information and updates on vaccine roll-out progress and benefits, public’s anxiety and queries ... apprehension about the vaccines ... and fear of adverse events, misconception about vaccine efficacy, rumours and negative narrative…,” said ahealth ministry guideline on vaccine hesitancy.

To address these probable challenges, the Centre has asked states to have in place an integrated 360-degree comprehensive advocacy communication and social mobilisation strategy in place, to include mechanisms by which four key areas around vaccination introduction, vaccine eagerness and hesitancy can be handled.

“As part of the measures, information education communication material was asked to be distributed among target population to send out the right message, and alley their fears regarding vaccination. Volunteers were trained to go into community for conducting awareness generation campaigns among the target population, among other activities,” said a government official aware of the developments, on condition of anonymity.

Experts, however, say that the Centre needs to draft an evidence-based communication strategy to address hesitancy in a more targeted age-based approach.

“Since it is clear that there is huge vaccine hesitancy among this group, we need to get to the actual reasons behind it and then look for ways to tackle it. The government should hire a professional agency that understands communication to generate data on reasons behind vaccine hesitancy among different age groups as the reason for being hesitant may not be the same in all age groups,” said Dr Chandrakant Lahiriya, senior public health and vaccine expert.

“Not just age-level, there should also be subgroups such as rural and urban as people in these groups may have different reasons for not coming out to get vaccinated. The data that is generated like this should be used to draft targeted, evidence-based communication strategy for their messaging to be more effective,” he added.