Even as two incidents of Covid patients dying because of an alleged disruption in oxygen supply in hospitals were reported on Wednesday, several states across India continued their efforts to ramp up oxygen supply to meet the increase in demand due to rising Covid infections.

On Tuesday night, 13 people died at the Chengalpattu government medical college hospital, allegedly due to oxygen shortage. In a private hospital in Roorkee, five Covid-19 positive patients died, again, allegedly due to non-availability of oxygen on Wednesday morning.

So far, about 80 persons have died in hospitals across the country, all allegedly due to a shortage of oxygen or disruption in its supply. The Delhi government on Monday, controversially told the Delhi High Court that the death of 21 patients at the Jaipur Golden Hospital was not because of lack of oxygen but “respiratory failure”. 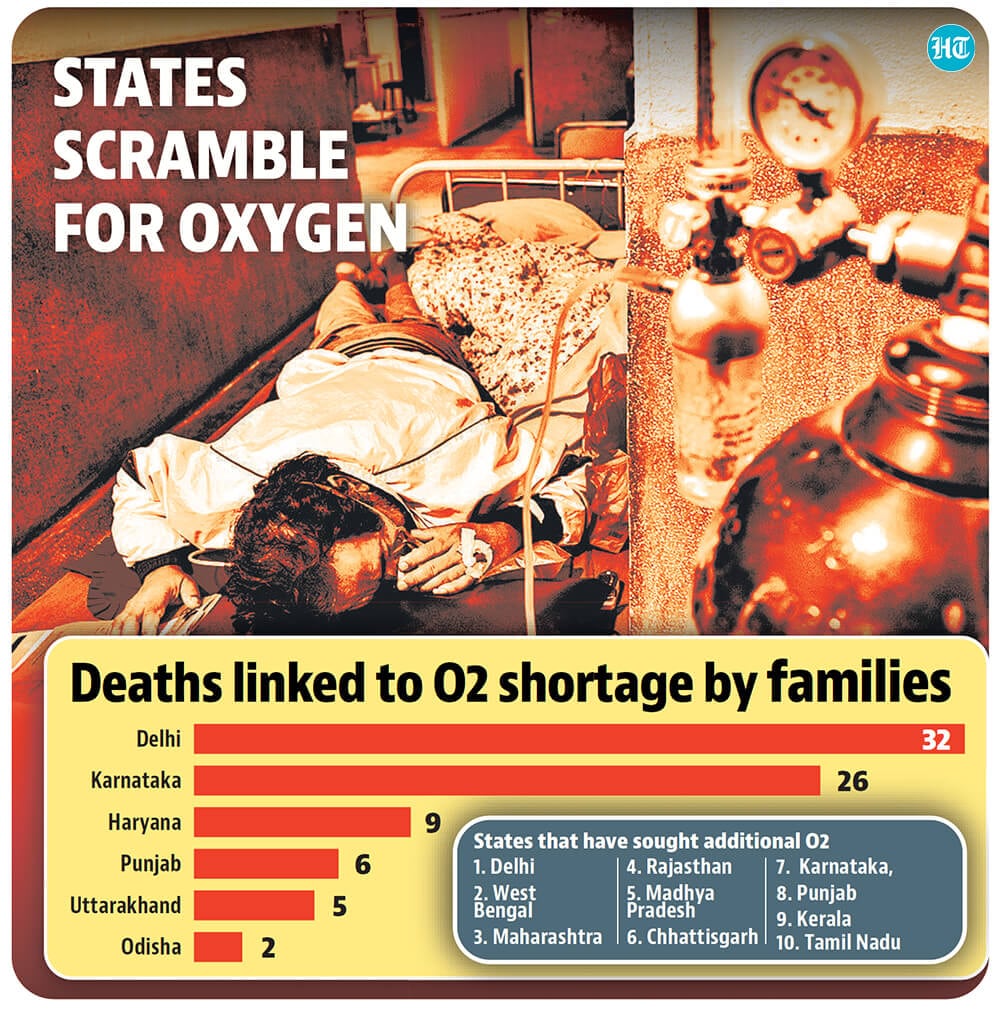 On Wednesday, Kerala chief minister Pinarayi Vijayan and West Bengal chief minister Mamata Banerjee wrote to Prime Minister Narendra Modi asking for additional supply of oxygen as number of Covid cases in the two states, where elections concluded on May 2, is on the rise.

All supplies of medical oxygen are channelised by the Centre.

In his letter to the PM, Vijayan said to augment storage the state need 1000 tonne of imported liquid medical oxygen.

“The Ministry of External Affairs may be advised to allot the required quantity partly from the current tranche of imports and balance from future imports,” he said. The CM also asked for more oxygen concentrators, ventilators and other equipment on priority basis considering high volume of cases. He also sought 7.5 million more doses of Covid vaccine to increase vaccination coverage; Kerala has so far administered 9 million doses of the vaccine to 9.1 million people(1.1 million have received two doses and 8 million, one).

In her letter to the PM, West Bengal chief minister Banerjee asked for additional allocation of least 500 MT of medical oxygen per day out of the total oxygen produced in Bengal to prevent any shortage. “There have been no deaths in any of the hospitals in West Bengal for oxygen so far. Till now we have not faced any shortage. But our oxygen demand has shot up from around 220 MT to around 400MT.

It is expected to rise further as cases are rising,” said a senior state government official who asked not to be named.

The Rajasthan government has also sought an additional 200 MT of oxygen daily from the Centre to meet any shortfall that may arise due to rising cases. The state’s health minister Raghu Sharma said he estimates demand for oxygen may rise to 950 MT by May 12.

“We are getting 230 MT less oxygen than the current requirement,” he said, asking the Centre to provide oxygen to Rajasthan from nearby sources so that oxygen can be easily transported.

He said the state needs 26 tankers to transport 370 MT of oxygen, which will be enough to meet the current demand. Rajasthan has 35,000 active cases.

The Punjab cabinet on Wednesday decided to ask the Centre for additional supply of oxygen. Punjab’s daily quota is 195 MT but its demand has risen to close to 220 MT, officials said. In Haryana, the officials said, there was no shortage of oxygen.

In Madhya Pradesh, in cities such as Bhopal, Indore, Jabalpur, Ujjain and Gwalior, private hospitals are admitting only those patients who can arrange for oxygen cylinders. The state is facing oxygen shortage as it does not have enough tankers to transport the oxygen to hospitals.

“We have placed an order of eight cryogenic tankers to a Thailand based company to improve transportation of the gas,” said Vishwas Sarang, minister of medical education.

Several hospitals across Karnataka, including Bengaluru have reported shortages in oxygen with at least 10 sending SOS messages.

“They say that government has been promising to fix the issues but so far only providing “stop-gap” arrangements with supplies to last a few hours,” said a government official who asked not to be named.

The officials said oxygen shortages have been reported from Mandya, Kalaburagi and Bengaluru Rural District .