Telangana chief minister K Chandrasekhar Rao addressed a Telangana Rashtra Samithi (TRS) rally in Ranga Reddy district on Sunday, during which refuted reports of dissolving his government.Thousands of supporters attended the ‘Pragati Nivedana Sabha’ (meeting) on Sunday. Roads leading to the venue were decked up with TRS flags, with the city police notifying the routes open for public.Here are the updates on the TRS rally:

In Tamil Nadu, people rule their own state with their leaders. Similarly, we shall retain power and not surrender to Delhi leadership: Telangana CM KC Rao at TRS rally in Ranga Reddy district, reports ANI.

I promised that if I don't give drinking water to every household through Mission Bhagiratha before next elections, I won't contest elections. No other Chief Minister in the country would dare to say something like this: Telangana CM KC Rao at TRS rally in Ranga Reddy district pic.twitter.com/MhBUxe3jI7

Will tell when I take a decision: KCR on early polls

Some media channels are saying KCR will dissolve the govt. All TRS members have given me an opportunity to take a decision on the future of Telangana. I will tell you when I take a decision: Telangana CM KC Rao at TRS rally in Ranga Reddy district, reports ANI.

KCR arrives at the venue

K Chandrasekhar Rao has arrived at the venue of the TRS rally. 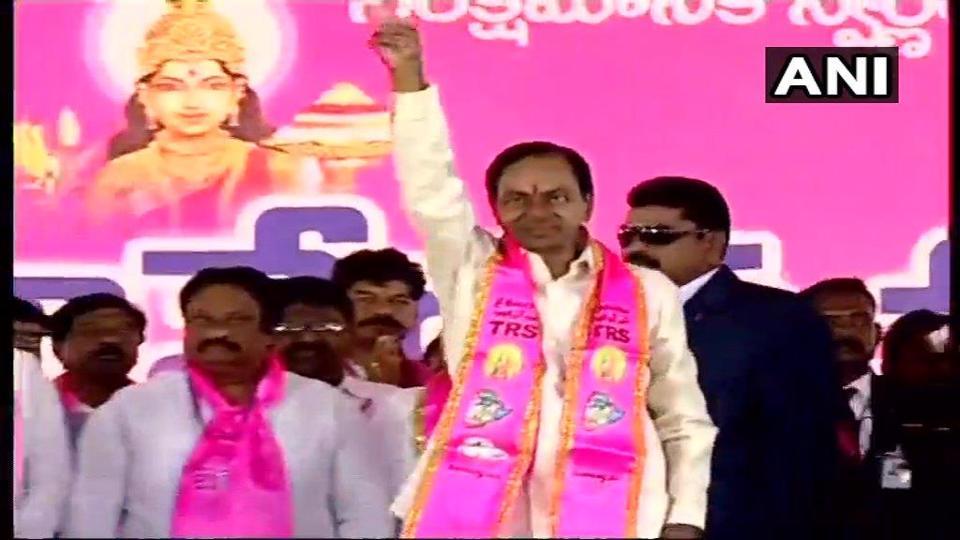 Massive crowd gather at the venue

The Cabinet meeting has concluded with no decision yet on early Telangana elections.

We’ll have another cabinet meeting shortly to take crucial decisions, says deputy chief minister Kadiyam Srihari. The next cabinet meeting is likely to be held on September 7.

Cabinet meeting is on

KCR holds a cabinet meeting at his camp office in Begumpet.

Crowds start trickling in ahead of rally

The turnout in this rally is going to be something that people will remember for a long time, it is going to be the biggest political rally ever held in India: Telangana Minister K. T. Rama Rao on TRS's Pragathi Nivedhana Sabha in Ranga Reddy district later today pic.twitter.com/ErzZxJXD6D