BJP president Amit Shah today kicked off the party’s campaign in West Bengal for the 2019 Lok Sabha elections with a rally in Malda. The event comes days after chief minister Mamata Banerjee hosted a mega opposition gathering in Kolkata.The rallies came after the Mamata Banerjee government refused permission for BJP’s “rath yatra”, citing law and order concerns. The party had contested the denial of permission in the courts and fought it up to the Supreme Court, but failed to get any relief. The apex court had, however, allowed the BJP to hold public meetings.  Bengal is crucial in the BJP’s plan for the 2019 Lok Sabha polls and the party has set itself a target of 22 seats in the state. The party which currently holds two seats in the state, has been bolstered with a number of senior Trinamool Congress leaders joining it.Shah’s rally in Malda, where he will address party workers in north Bengal, comes a day after a row between the BJP and the state government over a landing spot for his helicopter.:

Mamata not allowing benefits of welfare schemes reach you: Shah

“Modiji has offered 129 welfare schemes for the people of the country. But Mamata is not allowing the benefits to reach you,” said Shah in Malda.

Administration has been politicised: Shah

“The administration has been politicised. There was no permission for my helicopter and for the rath yatra”, says Shah.

“We have to start factories in Bengal and shut down illegal arms and bomb manufacturing units”, says Shah.

Throw out TMC, no one will have to pay syndicate tax: Shah

“Throw out TMC and I assure you that no one will have to pay syndicate tax,” says Shah.

“The Bengal govt employees get DA 49% less than their Central govt counterparts. Where has the money gone,” asks Shah.

If BJP wins in Bengal, not a single cow will be stolen: Shah

“Vote for BJP in Bengal and not a single cow will be smuggled,” says Shah in Malda.

Do you want a Bengal where there is no permission to immerse Durga idol: Shah

“I want to ask Mamata, the refugees who have come from Bangladesh are asking you whether you will support the Citizenship Amendment Bill” said Amit Shah.

“I am assuring Hindu, Buddhist and Sikh people living here that they need not fear NRC,” said Shah.

Half the Centre’s money consumed by infiltrators, half by TMC: Shah

The Central money is consumed half by infiltrators and the rest half TMC leaders, alleges Shah

“You (TMC) did not let people vote in the rural polls. Don’t try it this time. The central election commission will be in charge. Their staff will be in all booths. People need not fear,” says Amit Shah in Malda rally

Mamata can stop our yatras, but can’t remove BJP from hearts of people: Shah

“Mamata can stop our yatras, but can’t remove BJP from hearts of people,” said Amit Shah. “You don’t give us permission for the yatra. It isn’t a big deal. We will work harder, will sweat it out, but will sure dethrone you,” BJP chief Amit Shah in Malda.

TMC has turned Bengal into a kangal state: Shah

“TMC has turned Bengal into a kangal state,” says Shah in Malda.

In TMC’s regime, every 5th person is living below poverty line: Shah

“In TMC’s regime, every 5th person in Bengal is living below poverty line,” says Shah.

2019 polls will determine whether autocratic TMC govt will remain: Shah

“I have come here to kickstart the election campaign in Bengal. The 2019 Lok Sabha election in more important for Bengal than for the rest of the country. This election is to determine whether this autocratic TMC government will remain or will be thrown away,” Amit Shah says.

Given word to Shah that we will win more than 22 of Bengal’s 42 seats: BJP state president

“We have given word to Amit Shah that we will win more than 22 of Bengal’s 42 Lok Sabha seats, including both seats in Malda,” BJP state president Dilip Ghosh said.

If TMC crosses 20 Lok Sabha seats in 2019, I will leave politics: Mukul Roy

Mamata acting as a roadblock for development schemes: Mukul Roy

TMC chief Mamata Banerjee is acting as a roadblock for development schemes. She is opposing a scheme like Ayushman Bharat which is being praised across the world,” said BJP’s Mukul Roy. 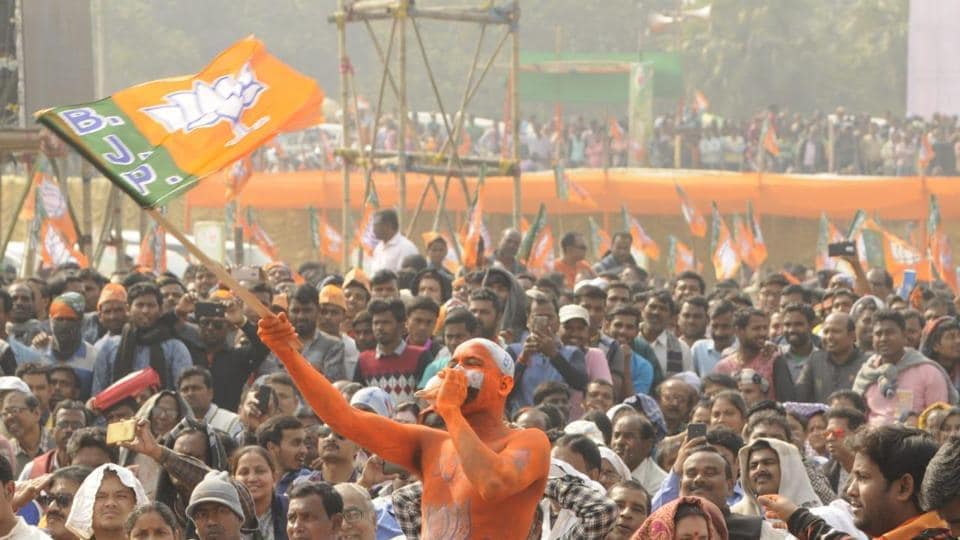 Amit Shah’s helicopter landed in Malda, he is expected to reach the rally venue shortly.

Amit Shah on way to Malda

BJP chief Amit Shah is on his way to Malda from Bagdogra airport in north Bengal to kick off the party’s campaign in West Bengal for the 2019 Lok Sabha elections.

The BJP on Monday said that Chief Minister Mamata Banerjee-led West Bengal government is creating hindrances for the party to hold any event in the state as they fear the rise of BJP’s prominence in the country, especially in Left-dominated states like Tripura.

Addressing a press conference here, Union Minister of Railways Piyush Goyal said: “Mamata didi has probably started seeing the whole picture clearly now. She is afraid now; she can clearly see the BJP’s domination, Modi ji’s bond with the people. The West Bengal government has dedicated itself solely to the purpose of creating hindrances for every event organised by the BJP in the state”.

BJP accuses TMC of vandalising posters ahead of Shah’s rally

“Gates, welcome arches, posters, cut-outs, festoons have been vandalised ahead of our national president’s rally. Gates have set on fire. Vehicles carrying our supporters are being stopped in many places,” state BJP President Dilip Ghosh said.