Priyanka Gandhi Vadra launched ‘mission UP’ with her first visit to the state on Monday after having been appointed as the Congress general secretary in-charge for eastern UP last month.Priyanka Gandhi was accompanied by Rahul Gandhi and Jyotiraditya Scindia, the party general secretary for western UP.Congress workers have planned a roadshow for the three leaders when they travel from the airport to the party’s state headquarter.The party in Uttar Pradesh is seeing the visit as the virtual launch of the Congress campaign in the state, ahead of the coming Lok Sabha elections.  Read highlights here:

I respect Mayawati and Akhilesh Yadav, but Congress will fight with all its might in UP: Rahul Gandhi on SP-BSP coalition.

In every defence deal, there is a clause against corruption. Narendra Modi scrapped corruption clause to benefit Anil Ambani. Modi’s empty slogans are before people. Chowkidar waived 3.5 lakh crore of industrialists and not farmers: Rahul Gandhi

Priyanka, Scindia will make Congress strong in UP again, says Rahul Gandhi at Congress headquarters in UP.

Fight with BJP is fight of ideology: Rahul Gandhi

People have seen what Narendra Modi has done in 5 years. Chokidaar has not given jobs, he said 2 crore people would get jobs but he only brought benefit to Anil Ambani, says Rahul Gandhi at UP Congress headquarters.

Congress started in UP and it cannot stay weak here: Rahul Gandhi.

Fight with BJP is fight of ideology: Rahul Gandhi

Priyanka and Rahul Gandhi got down from the bus to garland the statue of their late father Rajiv Gandhi.

The cavalcade reached Congress office and with that the roadshow has come to an end.

The cavalcade has taken a turn at the Mall Avenue towards the Congress office.

‘This government will go, change is around the corner’: Jyotiraditya Scindia

The cavalcade moves towards Raj Bhawan crossing. All through the route, Congress workers raise the slogan ‘Chowkidar chor hai’. 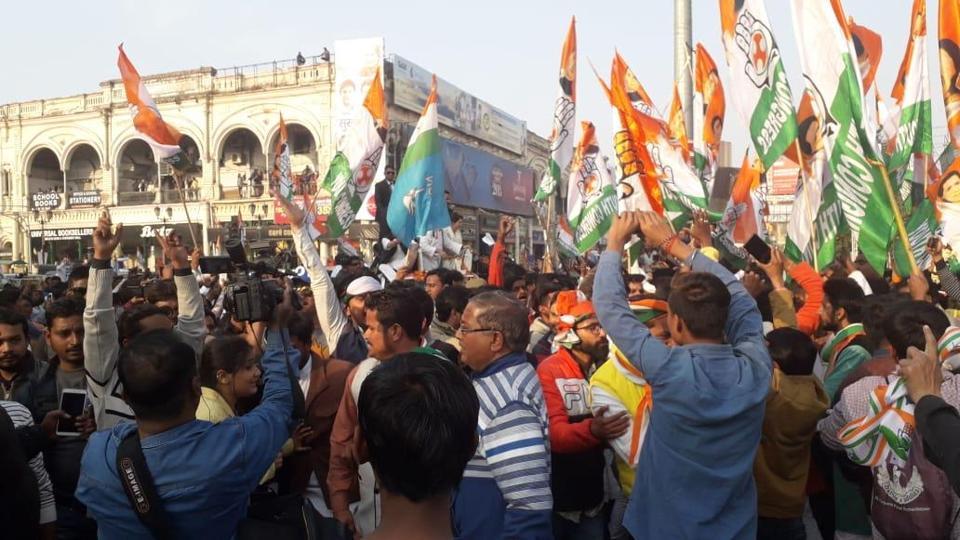 Rahul Gandhi and Priyanka got down from their vehicle to garlands Sardar Patel’s statue at GPO Park, Hazratganj.

The cavalcade is now moves towards Hazratganj from Lalbagh.

Priyanka Gandhi Vadra and Rahul Gandhi got a rousing welcome at the Lalbagh crossing. Senior Congress leaders Ammar Rizvi and Nasimuddin Siddiqui welcomed them along with a large numbers of party workers from Lakhimpur Kheri district.

Won’t play on backfoot in UP, says Rahul during Lucknow roadshow

“I have made Priyanka and Scindia general secretaries of UP and I have told them that they should fight against the injustice done by current UP government,” said Rahul Gandhi adding, “ We will play on front foot not on back foot. Obviously, the aim is Lok Sabha polls, but I have told Priyanka and Scindia that the bigger aim is to win UP in 2022.”

We will not rest until we form a government that belongs to the youth, farmers and the marginalised: Congress President.

Rahul, Priyanka vacate the bus-deck, moves inside it

Priyanka and Rahul Gandhi have vacated the deck of the bus and moved inside it due to power cables hanging overhead.

Meanwhile, the roadshow will reach Lalbagh crossing shortly, where hundreds of Congress workers have assembled to welcome Priyanka and Rahul Gandhi. 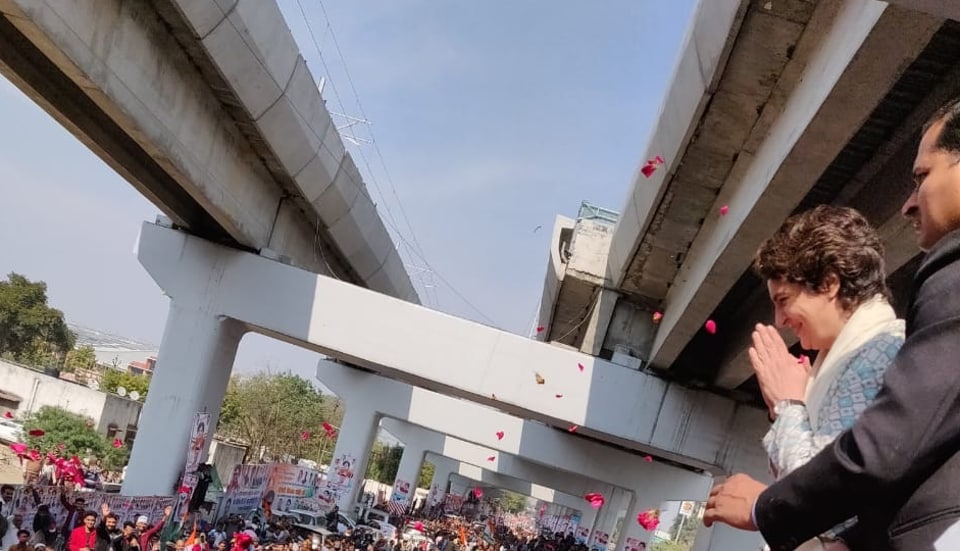 ‘It’s like Indira Gandhi has come back’: Cong supporter

“It’s like Indira Gandhi has come back,” said Fuzail Ahmed Khan, 45, a Congress supporter. “The state’s farmers want Rahul Gandhi to be prime minister, Priyanka to be chief minister.”

Even before Priyanka Gandhi Vadra could arrive in Uttar Pradesh since, a poster war started between her supporters and opponents with both going overboard in their portrayal of expressions.

While posters by Congress workers installed in Lucknow portrayed Priyanka as Goddess Durga, the BJP workers took a jibe at her state visit by putting a flex reading that Congress general secretary is here to rob the state.

A Shiromani Akali Dal (SAD) leader said on Monday that Congress President Rahul Gandhi’s “political obituary” had been written with the launch of his sister Priyanka Gandhi Vadra into active politics.

Congress leader Nasimuddin Siddiqui has reached at Lalbagh crossing along with his supporters to welcome Priyanka and Rahul Gandhi.

Congress officials hope Priyanka’s entry into politics will improve its chances across Uttar Pradesh, a vast agrarian state of 220 million people that the BJP nearly swept in the last general election in 2014, winning 73 of the 80 seats there. 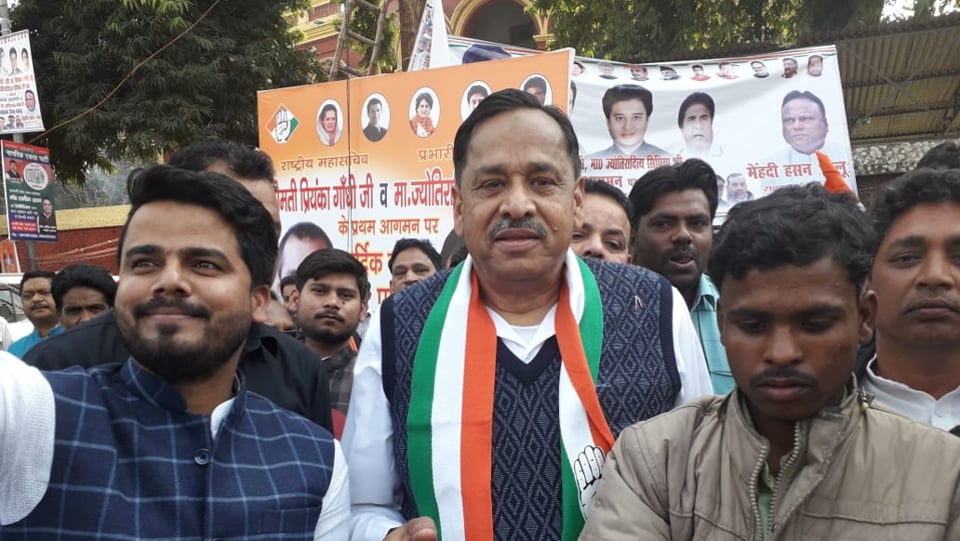 As Congress workers- led by leader Ammar Rizvi are eagerly waiting for the roadshow bus to arrive, the entire stretch of the road is now packed with party workers. They are also raising slogans such as, ‘Dehan karo Modi ki Lanka, behen Priyanka, behen Priyanka, hailing Priyanka Gandhi and pitting her against PM Modi. 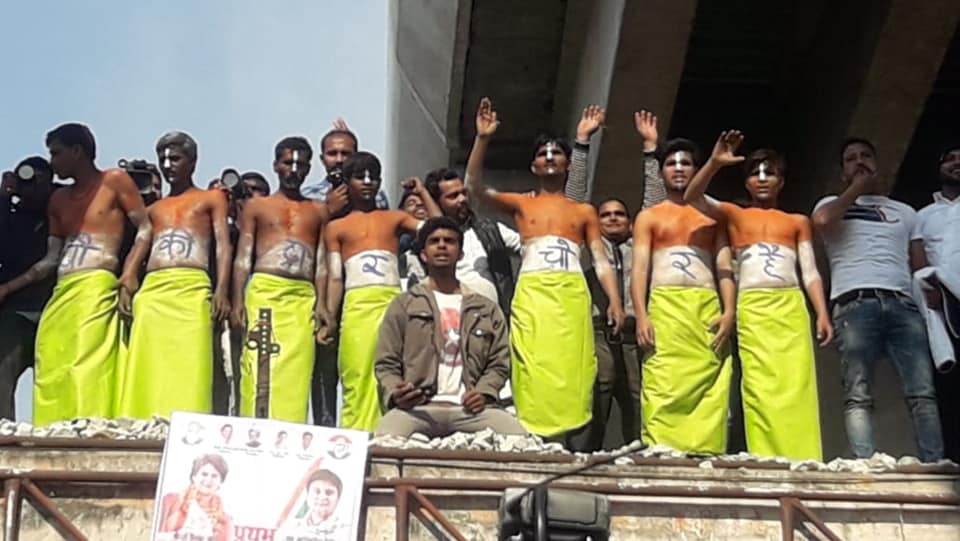 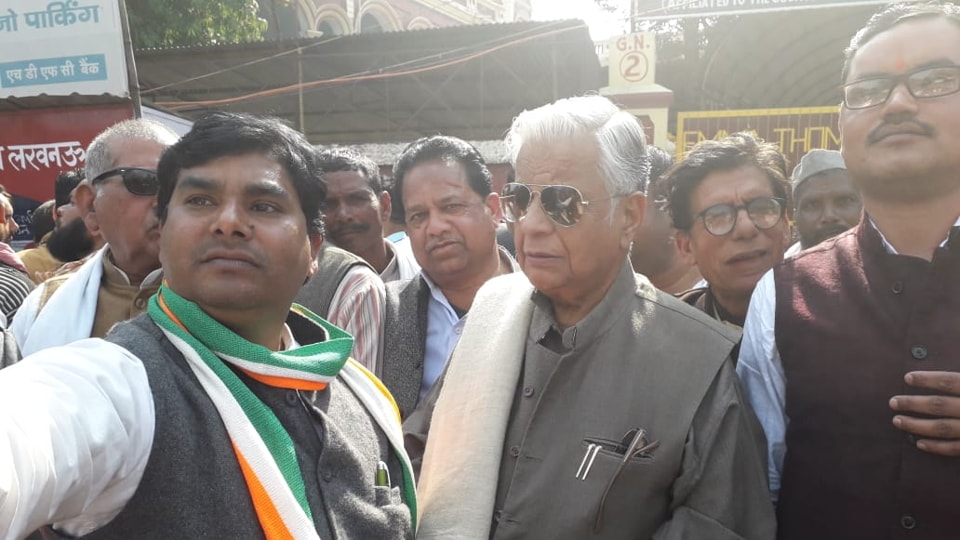 There seem to be huge enthusiasm among commoners to see Priyanka Gandhi.

However, as the crowd is swelling at the busy crossing, managing the vehicular movement has become a tough task for the cops. 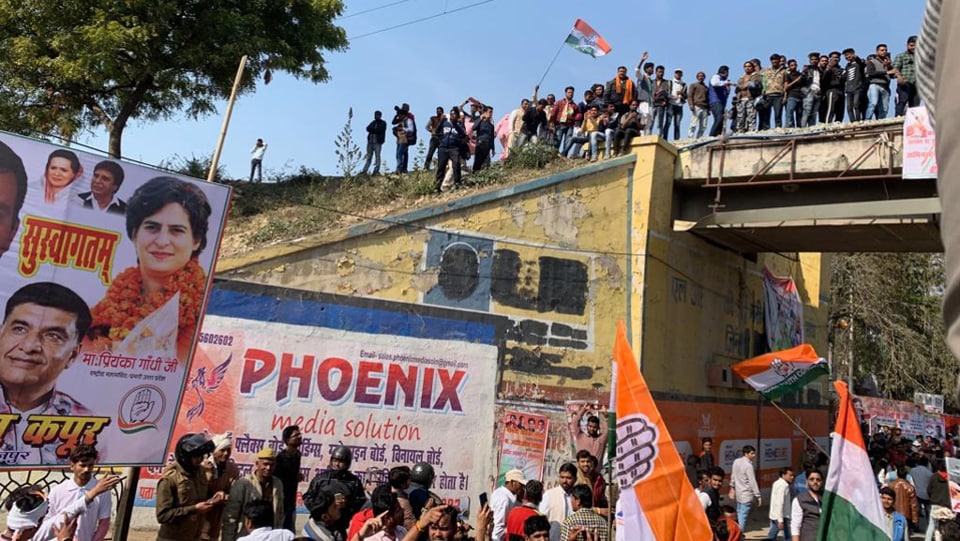 People are also lining up on both sides of the trail to take selfies with the bus.

UPCC president Raj Babbar, senior UP leaders RPN Singh and Anu Tandon are also with the trio on the bus’ deck.

Crowd swells as roadshow bus moves towards the city

The roadshow bus is now passing through under a metro train bridge.

Meanwhile, the crowd swells as the bus moves towards the city. 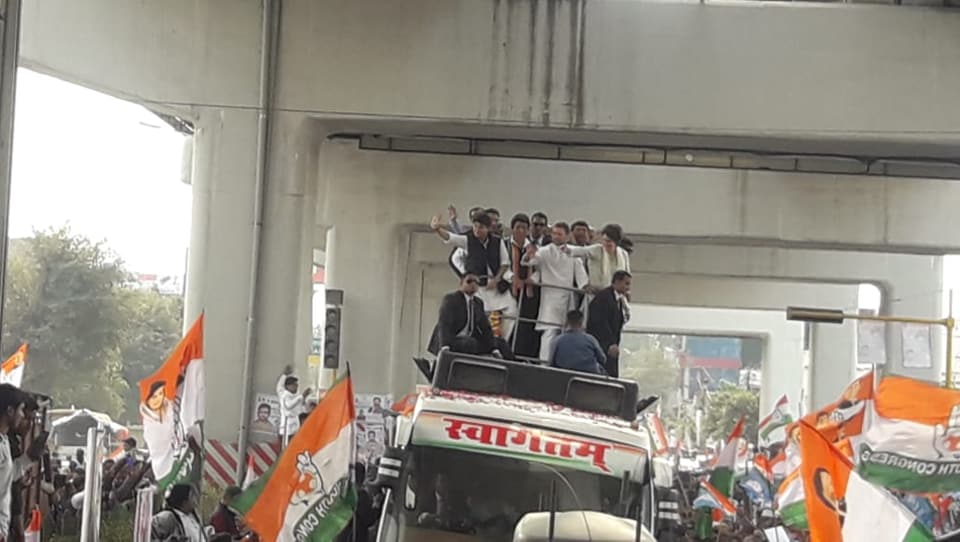 Traffic jam at roads near airport

The procession of party workers and supporters around the bus of Priyanka Gandhi caused a huge traffic jam at the point where road from the airport meets with the arterial road. 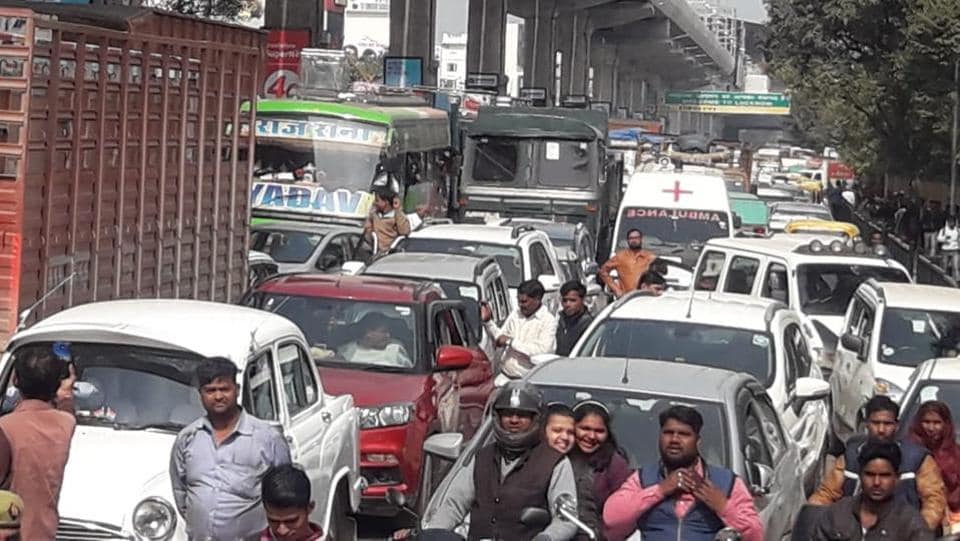 During the Congress party’s mega roadshow, president Rahul Gandhi showed a cardboard cut-out of Rafale jet to the sea of crowd, using the campaign to target the BJP government over Rafale deal.

Priyanka Gandhi’s road show has reached the first welcome point on airport crossing. As the bus moves forward, the Congress workers try to throw bouquets towards Rahul and Priyanka Gandhi. 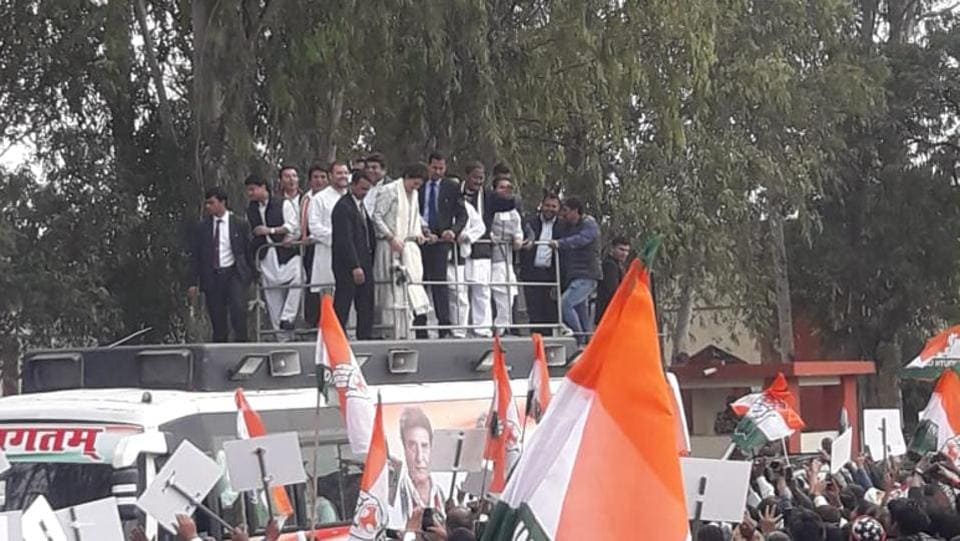 The Uttar Pradesh Congress is seeing Priyanka Gandhi’s roadshow as the virtual launch of party’s campaign in the state ahead of Lok Sabha elections.

Priyanka Gandhi begins roadshow with brother Rahul by her side

Priyanka Gandhi has begun the roadshow, kicking off ‘mission UP’, with brother Rahul Gandhi by her side.

Priyanka, Rahul Gandhi and Jyotiraditya Scindia have arrived in Lucknow and will be beginning the roadshow shortly. The trio also inspected the roadshow bus.

Congress cadres charged up ahead of Priyanka Gandhi’s roadshow

Ahead of Priyanka Gandhi, Jyotiraditya Scindia and Rahul Gandhi’s roadshow in Lucknow, the Congress cadres are charged up, celebrating and dancing to the beats of dhol and tunes of Bollywood patriotic songs.

Ahead of her Lucknow roadshow, Priyanka Gandhi has made her Twitter debut . Minutes before the roadshow, Congress party’s official Twitter handle announced that the party’s eastern UP in-charge has joined the social networking site.

The truck which will be used for Priyanka Gandhi’s roadshow is decked up and all set to ferry the leaders around. The truck on which the trio - Rahul Gandhi, Priyanka, Jyotiraditya Scindia- will do the road show has Priyanka’s image at the centre. In a separate spot, her picture is superimposed on Indira Gandhi’s picture. 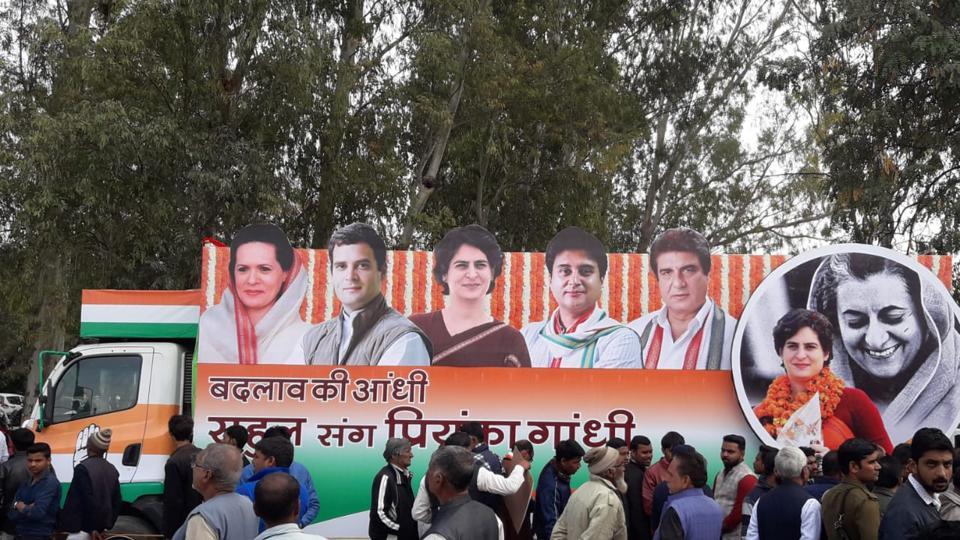 A bus, which will also be used by the trio, has been decorated by the Congress party supporters. It is the same bus on which Rahul and Akhilesh did roadshows under their UP assembly 2017 poll pact. “They’re calling this road show but BJP sees this as ‘Chor machaye shor’. Gandhi-Vardra family is out on bail. They can’t hold road show but a ‘Chor show’. Peopleof UP,especially Lucknow,will come to see corrupt faces of those who looted ₹12 Lakh Cr of this nation,” said UP minister SN Singh.

Banner portraying Priyanka Gandhi as goddess Durga cropped up in Lucknow ahead of Congress General Secretary for UP East, UP West Jyotiraditya Scindia and party President Rahul Gandhi’s visit to the city today.

Banner seen in Lucknow ahead of Congress General Secretary for UP East Priyanka Gandhi Vadra, UP West Jyotiraditya Scindia and party President Rahul Gandhi's visit to the city today. pic.twitter.com/i7Fojhb49m

Rahul Gandhi to arrive in Lucknow at noon

Congress president will be joining sister Priyanka Gandhi on her Lucknow visit. He will be arriving in Lucknow at 12 pm. A roadshow will be held from Lucknow airport to Congress party office in Lucknow, informed Rahul Gandhi with a tweet.