The latest spurt of infections is fuelled by the second wave in most European nations, the third in the United States, and the tail-end of the first wave in India and South America. Here is a look at the countries that are behind the still-rising cases
READ FULL STORY
Hindustan Times, New Delhi | By Jamie Mullick

As the global case tally of the coronavirus disease (Covid-19) crossed the 40 million mark, the outbreak appears to have entered the fourth and strongest (yet) wave. The latest spurt of infections is fuelled by the second wave in most European nations, the third in the United States, and the tail-end of the first wave in India and South America. Here is a look at the countries that are behind the still-rising cases

The first wave of the infections started in China at the start of the year with the first batch of infections reported in December 2019. After a rapid initial outbreak, China managed to control the outbreak by the end of February, marking the end of the first wave. The second wave started in March in Europe, with Italy as the earliest hot spot along with Spain, the United Kingdom and Germany. The virus started gripping the US by May, which marked the start of the third wave. This wave flattened through August and September, largely due to a recent plateau in daily cases in the US and Brazil. India became the global epicentre around early August 2. Where is this wave coming from?

Third wave starts in the US

The US has reported an average of 55,917 new cases every day in the past week, according to Worldometers.info. This is the highest that the seven-day average of new infections has touched in the country since early August when the second wave of infections was receding. New infections are rising in most parts of the country with states such as Florida, Texas and California, all of which were hit hard in the second wave, reporting most cases since August. Scientists warn that the third wave is likely to surpass the peaks of the second wave. The new case trajectory in Europe is at an all-time high with new infections crossing 150,000 for the first time on Friday, just a week after daily infections on the continent surpassed the 100,000 mark for the first time. Nations such as Russia, France, Spain and UK are all reporting a record daily numbers of infections in their second waves. In the light of the new wave, many countries have imposed curbs on movement — for instance, a night-time curfew came into effect in France from Saturday.

For a month now, new cases in India appear to be dipping consistently – the first time this has happened since the outbreak started in early March. For the week ending on Saturday, India reported 63,025 new cases every day — a drop of 33% from the peak recorded in mid-September, and the lowest this number has touched since the middle of June. However, India remains the country with the worst current trajectory of daily cases. To be sure, the US is set to retake the spot as it has reporting 55,917 daily cases in the last week, and the curve is rising there. 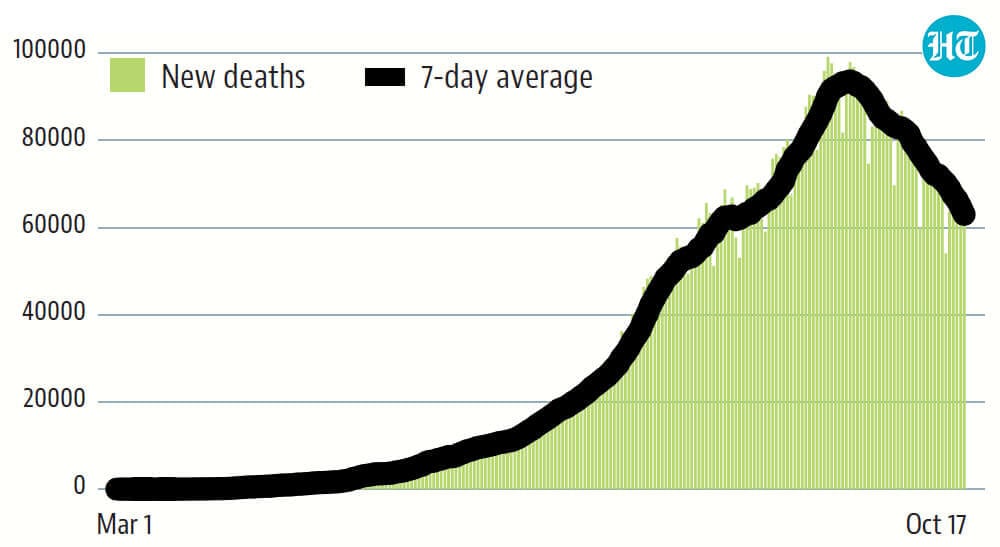 While every wave of cases has been stronger than the one it precedes, the same can’t be said for deaths. With time, scientists are becoming better at saving lives from Covid-19 and as a result, the peak of deaths reported during the second wave of cases has never been surpassed. This is despite the fact that the third, and now fourth, waves have had a far higher number of cases. This is something that has helped countries like India (which saw its peak in the third global wave) keep its mortality rate better than the world average