Ahead of Deepika Padukone and Ranveer Singh’s November 14 and 15 wedding, here’s a timeline of their epic love story, told over six years.

Had Deepika Padukone and Ranveer Singh not announced their wedding a few hours before the Koffee with Karan season 6 premiere - due to feature Deepika and Alia Bhatt - the episode could have developed legendary status for one reason. It had what is possibly the biggest admission of the existence of their relationship thus far. When host Karan Johar mentioned that Deepika has been in a relationship for five years as compared to Alia’s few months, Deepika quietly corrected him and mouthed, “Six.”

But that potentially big moment was undone by a surprise confirmation of not only their relationship, but that Deepika and Ranveer would be tying the knot over a two-day function on November 14 and 15.

While fans welcomed the news warmly on social media, the wedding had been rumored for weeks if not months - their increasingly common PDA online had put all questions about them being together at rest.

As Deepika Padukone and Ranveer Singh head off to Italy for their special day, here’s a timeline of their epic romance.

Deepika and Ranveer at the recent Hindustan Times Leadership Summit spoke about their first meeting and their first impressions of each other. While Deepika remembered thinking that Ranveer was not her type, he remembered thinking to himself how beautiful she is. This was after the release of Ranveer’s debut film, Band Baaja Baarat. Ranveer said that he remembers seeing her at a restaurant and being starstruck.

It was on the sets of director Sanjay Leela Bhansali’s film that Deepika and Ranveer are rumoured to have begun dating. Ranveer in a post celebrating the film’s fourth anniversary, wrote alongside their picture, “Don’t we look great together?” The two would go on to star in two more Bhansali films, cementing their reputation as one of Bollywood’s hottest on-screen couples.

In 2013, Ranveer was admitted to hospital with a case of dengue. He said then that he’d also contracted ‘loveria’. In an interview to the Times of India, the actor said that he wanted to marry the girl he was with. “I have felt like this in the past also, but it’s a strong feeling this time. When you feel so strongly then you can say I guess I am in love. I don’t know what is love, but what I am feeling is quite strong and cannot explain it. [I like] everything [about this girl]. Her kindness and her being genuine and caring,” he had said. In the same year, he also said that he can’t focus on anything else when Deepika appears on screen, and that he’d be mortified if she called him Ranbir by accident.

When she was asked about his ‘loveria’ comment, she told HT, “No, it’s amazing, the way he is. He is so unique. And I think what I admire about him is that he is so unapologetic about the way he is.”

In 2013, it was reported that Ranveer had secretly travelled to the Dubai sets of Happy New Year to spend time with Deepika. “Ranveer dropped by for a few days with Deepika as her Dubai schedule is a long one. Dubai is a great place for a young couple to enjoy a romantic few days,” a source had told a leading daily. He has also been spotted on the sets of Chennai Express and Piku. Years later, Deepika’s xXx: The Return of Xander Cage director DJ Caruso casually revealed in an interview that Deepika’s ‘boyfriend’ Ranveer has come to the sets.

In 2014, Deepika was spotted with Ranveer in Barcelona, where he was shooting for Zoya Akhtar’s Dil Dhadakne Do.

Deepika and Ranveer were spotted together ringing in the new year in the Maldives. This was in 2015. Only a few months later, in March, they began appearing together at industry events. They were spotted arriving in the same car to producer Karim Morani’s birthday bash. At the IIFA awards in the same year, Ranveer delighted fans by going down on one knee before Deepika on stage. He presented her with a large, red heart.

According to a Quint report, Ranveer gushed about the privilege of working with Deepika for the second time. “It’s my privilege that I get to work with her twice during this phase, in Ram-Leela and Bajirao Mastani. I trust her immensely, I know that she’s one of the most generous actors that I’ve ever worked with. I know that I can surrender to her in a scene... just connect with her, be present with her, look into her eyes and really mean what I’m saying. She’s an incredible performer”, he said.

Deepika and Ranveer basically confirmed all the rumours in 2016, when they were spotted leaving an Ambani party together, holding hands. 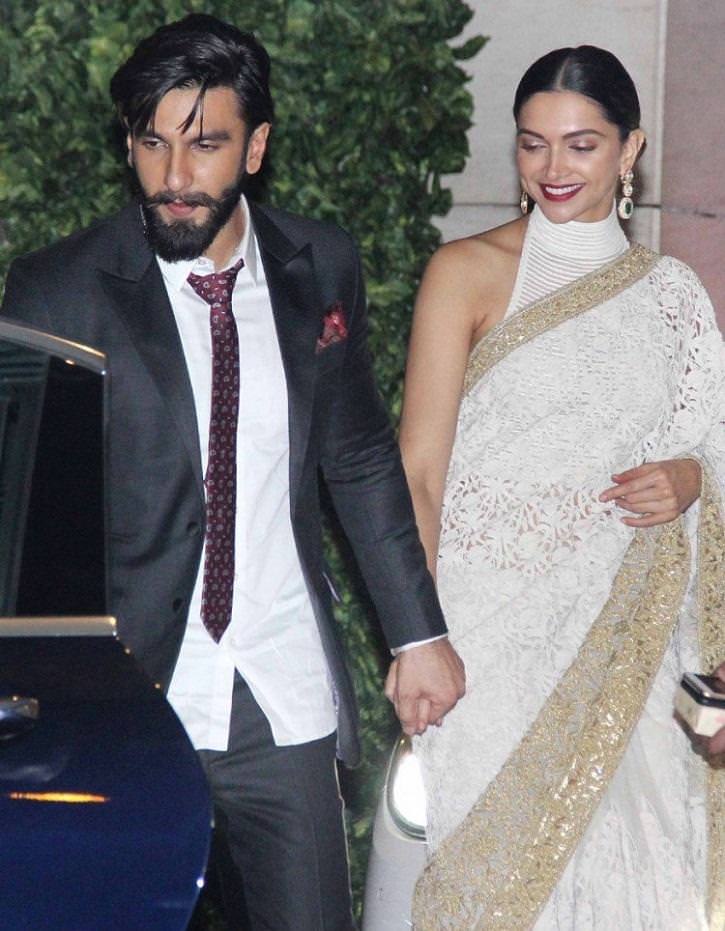 While promoting her third film with Ranveer, Padmaavat, Deepika told Filmfare, “I am bored when people say that they love his energy. The man has so much more! He is an extremely good human being. He is kind and good to people. He is very real, emotional and sensitive. He is a man who is not afraid to cry and I love that about him. He is a man!”

Ranveer and Deepika’s comment trail on each other’s photos was making headlines. In one example, Deepika posted a sunny picture from her flight of clouds. Ranveer commented, “Hello, Sunshine!” on the post, leaving everyone wondering whom he was referring to. Deepika also commented a big ‘no’ on Ranveer’s childhood photo of him in a mohawk.

Just days before making their big announcement, the couple was asked at the HT Leadership Summit about their wedding. While they refused to confirm anything, they did say that they’d make an announcement if anything were to develop. But the highlight of the interview was them dancing to Ranveer’s Khalibali dance from Padmaavat together.

What in the Habibi is going on here?! 😂 @deepikapadukone

The couple in a joint social media announcement on October 21 wrote that they were going to get married on November 14 and 15. Here’s their announcement:

“With the blessings of our families, gives us immense joy in sharing that our wedding is set to take place on the 14th and 15th of November, 2018.

We thank you for all the love you have showered upon us over the years and seek your blessings as we embark on this incredible journey of love, loyalty, friendship and togetherness.